Home » Lifestyle » Who are the contenders to take out this year’s Hottest 100?

Premier Australian rockers Gang of Youths and pioneering electronic artist Flume appear to be the leading contenders to take out the crown in this year’s Triple J’s Hottest 100 countdown, being held on January 28.

The annual music countdown is always held on the fourth Saturday of January, after the previous date was scrapped when the national broadcaster decided to move its countdown from Australia Day back in 2017. 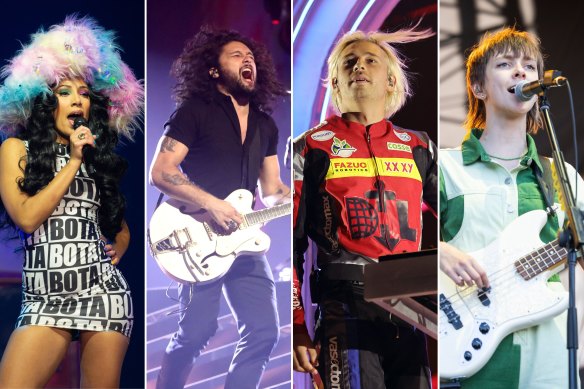 Prime Minister Anthony Albanese’s has submitted his votes (in typically inoffensive hyper-local fashion) but if you haven’t yet, voting is still open until January 23, before the countdown party on the 28th. But, there are already some trends emerging – including a house music revival that could challenge Triple J’s indie rock favourites.

Countdown regular Flume released his album Palaces last year and the Sydney-born artist is currently the bookies’ favourite to take top spot on the countdown for Say Nothing (ft MAY-A), according to Sportsbet. However, Hottest 100 predictor 100 Warm Tunas has put rockers Gang of Youths in top spot for in the wake of your leave.

Warm Tunas compiles its list using voting forms shared across social media. Last year, it successfully predicted The Wiggles would take out the No.1 spot for their remix of Tame Impala’s Elephant. After 2016, the tool has predicted all but one winner, and it already has a larger sample size to make its predictions this year compared to last.

Dance hit B.O.T.A. (Baddest of Them All) from Eliza Rose and Interplanetary Criminal is also likely to place well, with Sportsbet ranking it the second favourite as of Tuesday.

Any internet favourites and remixes getting into the list?

The Wiggles’ unprecedented victory last year showed the potential strength of a unique cover via Triple J’s Like A Version platform. But this year, it’s unlikely any will make it that far.

Instead, Flume’s hardstyle cover of Shooting Stars (and its wild video clip) may be the highest-ranked reworked tune.

Brisbane rockers Dune Rats may also feature in the latter half of the countdown thanks to their take on The Angels’ ever-popular Am I Ever Gonna See Your Face Again. King Stingray, a rock group originating from Arnhem Land in the Northern Territory, are also likely to have their remix of Coldplay’s Yellow feature, alongside tracks from their popular new album.

And although he achieved mainstream success long ago, Joji – who first rose to prominence from his sketch comedy YouTube videos as ‘Filthy Frank’ – is also expected to appear close to the top 10 thanks to Glimpse of Us.

However, the greatest rehashed TikTok sensation from the past year, a Duke & Jones remix of documentary maker Louis Theroux’s old attempt at rapping, is not mentioned in Warm Tuna’s current top 200 predictions. Nonetheless, there are some betting markets suggesting Theroux’s Jiggle Jiggle is in with a small chance of making it.

The theme music for hit black comedy The White Lotus has also been floated as a popular international track eligible for Hottest 100 voting, although it doesn’t appear in Warm Tuna’s current list.

Who could have the most songs in the 100?

You wouldn’t have guessed it, but an indie rock band could be the biggest winners on Triple J countdown day. Spacey Jane, a Fremantle foursome which released their Here Comes Everybody album last year, currently have five songs (Hardlight, Sitting Up, It’s Been A Long Day, Pulling Through, Yet) in Warm Tuna’s top 100.

Flume, who is the only artist to have recorded a hit in each spot in the top five over the years, is also likely to feature multiple times.

But perhaps the biggest riser compared to previous years is British producer Fred again.., who again surged in popularity last year after a hugely popular Boiler Room set in London. Alongside his aforementioned hit Delilah (pull me out of this), his collaboration with Swedish House Mafia for Turn On The Lights again.. (ft Future) and solo track Jungle are also likely to make the countdown.

Parris Goebel Lives Out Her Fantasies Through Dance