Home » Lifestyle » Who is the victim and who is the killer in Lie With Me?

Who is the victim and who is the killer in Lie With Me? FEMAIL reveals the questions that need to be answered as the nation is gripped by racy new noir thriller on Channel 5

A body bag loaded into an ambulance, a charm bracelet pulled from a pool, moody lighting and a young woman in a police interrogation room being questioned about the ‘deceased’: the opening scenes of Channel 5’s new thriller noir Lie With Me had all the cliches of a classic nail-biter, so it’s no wonder fans have been left with dozens of questions just one episode in.

The four-part British-Australian drama debuted last night and sees former EastEnders stalwart Charlie Brooks play British woman Anna Fallmont who up sticks from London and moves to Melbourne with her Australian husband Jake (played by Neighbours star Brett Tucker) after a mysterious event forces them and their two young children into a ‘new start’.

In a fashion typical of the genre, the episode starts with a death – although it’s not clear who has died.  It then cuts to a police interrogation room, where a young woman (who we later discover is Anna and Jake’s nanny Becky Hart played by Phoebe Roberts) looking distraught as she’s asked: ‘How long have  you known the deceased?’.

Before anything else is revealed, it flashbacks to five weeks ago to the first days of Anna and Jake’s move to Australia, where more questions are raised than answered. 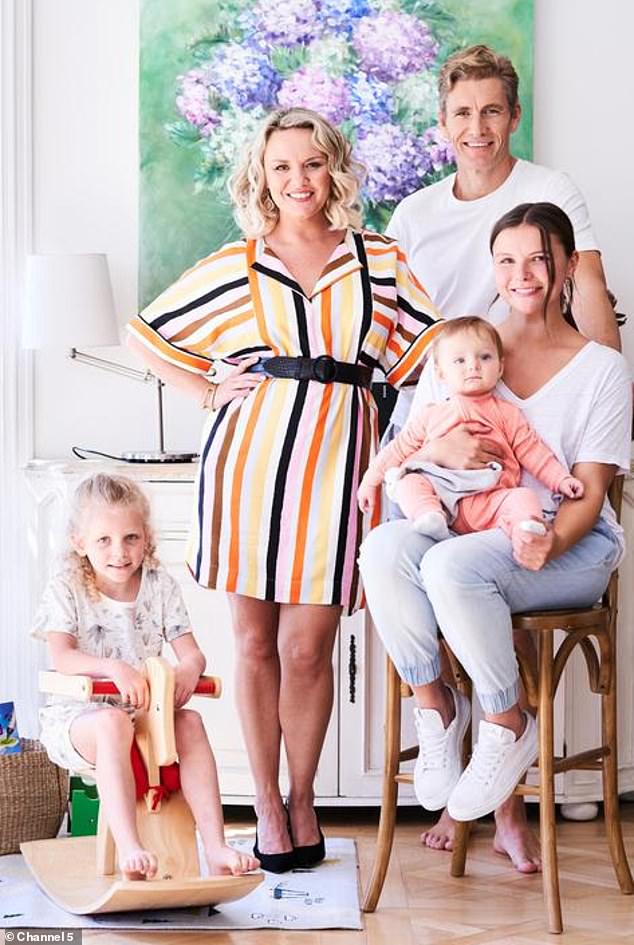 A body bag loaded into an ambulance, a charm bracelet pulled from a pool, moody lighting and a young woman in a police interrogation room being questioned about the ‘deceased’: the opening scenes of Channel 5’s new thriller noir Lie With Me had all the cliches of a classic nail-biter, so it’s no wonder fans have been left with dozens of questions just one episode in. Pictured: Charlie Brooks as Anna, Brett Tucker as Jake and Phoebe Roberts (sitting) as nanny Becky

Anna reveals that they left London after Jake had an affair that ‘nearly broke them’ but Jake acts as if this is all a delusion from Anna – who he implies is losing her mind.

Anna tells the couple’s nanny Becky that she believes Jake is cheating again, as he gets texts at 2am from a number saved as ‘Mummy’ that isn’t his mother – and that she found a woman’s bracelet in his car.

Becky tells Anna to confront his secretary Caroline  (Isabella Giovinazzo) about it, which leads to a denial and Anna looking ‘crazy’.

It’s later revealed that Becky is the woman Jake is having an affair with – as he texts him ‘Mummy?’ to which she replies ‘Downstairs’.

Jake then walks down to the wine cellar where Becky is waiting for him in red lingerie, and the pair have sex.

Flashbacks show the pair met in London and concocted a plan to move to Melbourne and make Anna look crazy so Jake can divorce her and get full custody of the children.

So who’s in the body bag? And who is the killer? Or is there not a killer at all? Why is Becky’s bracelet  in the pool? Is the gardener in on it? What about Jake’s meddling mum?

Here’s FEMAIL reveals the questions the show must answer…

The Victim: Did Anna die? Or is it Jake? Or neither of them?

With an affair underway, grand schemes at play and a chess game of a marriage it would be fair to assume one of the show’s protagonists – Anna or Jake – is the victim in the body bag.

We know it can’t be Becky, who’s in the police interrogation room, and it’s not Jake’s meddling mother Cynthia (Caroline Gillmer) or the couple’s elder daughter as in the opening scenes we see them both.

Cynthia also tells police her granddaughter ‘keeps asking for Mummy’ so ‘what can I possibly say?’ suggesting that Anna may have been the victim – or taken into police custody as the killer.

The only other characters we’ve been introduced to are the family’s gardener Liam  (Alfie Gledhill), Caroline and the couple’s baby son Oliver.

It can’t be Liam as he’s in the scene, smartly dressed and watching the house from a distance with a troubled expression on his face. It’s also unlikely to be Caroline, as Anna seems to believe her denial of an affair.

Baby Oliver is the only other possibility but given the size of the body bag – and the phrasing o the question ‘how long have you known the deceased’ it’s unlikely.

The flashback also starts with Anna running and coming across a snake, before returning to Jake and saying: ‘This country is full of things that can kill you’. Is this an omen she’s going to kill her husband? Or that she’s going to be killed? 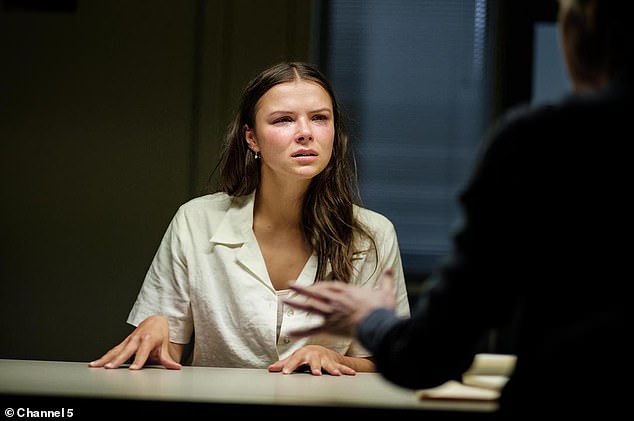 Becky (pictured) is pulled into a police interrogation room in the first scene. Does this mean she’s the killer?

The killer: Did Anna kill Jake? Did Jake kill Anna? Is it someone else entirely or no one at all?

There’s a lot more options at play in guessing the killer than the victim, if there is indeed a killer at all.

The obvious answer seems to be Jake killed Anna or Anna killed Jake. From the get-go we see Jake gaslighting and plotting against his wife, which could mean he killed her. Or will Anna discover Jake’s cheating and kill him in anger?

Or maybe it’s Becky? We do see her in an interrogation room meaning she’s certainly as person of interest in the case.

We know Anna’s missing in the opening scene – presumably she’s dead, on the run, or in police custody –  so if Becky killed Jake, where is Anna right now?

Mysterious gardener Liam, who we’ve only seen in his work clothes so far, is also a suspect, as he looks over the scene of the crime dressed in suit. The first episode shows him as an outsider who is clearly lurking on the Fallmont marriage and gossiping with Becky. Could he be more involved than it seems? He warns Becky ‘something isn’t right’ and to ‘get out while she can’. Could he know more than he’s letting on?

Cynthia, who has made no secret of her distaste for her daughter-in-law may also be guilty, if she got caught meddling in her son’s disastrous marriage.

We also can’t rule out the possibility that there’s no killer at all.  While the viewer is certainly led to believe a murder investigation is underway, it’s not explicitly clear, and it would be a classic thriller twist if the body in the bag died by suicide or accidentally. 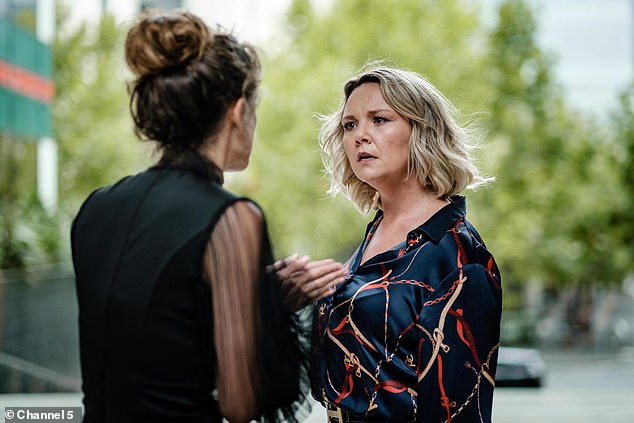 What did Anna do in London?

Throughout the episode, we see Anna mutter ‘I am not my past’ and discuss with her husband if it’s ‘too soon to return to work’.

So what exactly happened to make Anna and Jake move across the world? Was it just and affair or something more? If it was Jake’s affair, why is Anna upset about her past?

Anna also isn’t allowed to drive and says she feels like ‘half a person’ as well as being heavily medicated in scenes.

Cynthia suggests she’s worried about Anna as a mother, did she do something to endanger her children? Or is it another lie from Jake? 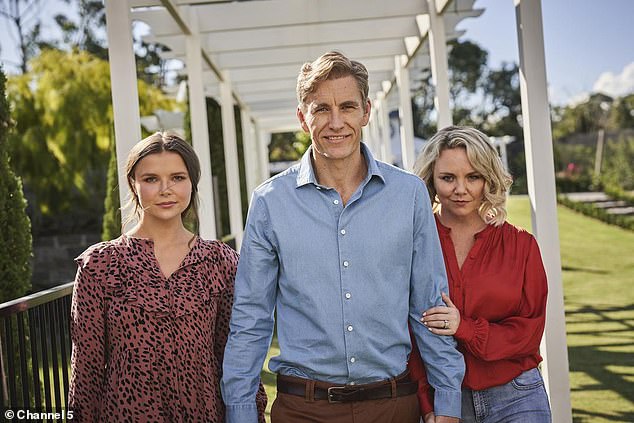 Nanny Becky (left) is having an affair with Jake (centre). So will his wife Anna (right) find out?

Will Anna find out about Jake and Becky?

Jake has really hidden his mistress in plain sight, so will Anna who has been shown to be a well-educated, professional woman, be able to figure out what’s going on right under her nose?

Her husband has convinced her to move to the side of the world, ditch her career and start a new life.

Grace, the couple’s young daughter, seems very excited to play with Becky. Have they met before the interview?

Anna is obviously suspicious of Jake, so it seems audacious to move your mistress in.

So far, Becky managed to put all suspicion on Jake’s secretary – but will they keep it up?

Is Jake also having an affair with his secretary?

But, shots show the Jake and Caroline very close, with Jake opening doors for her and driving her around – so could he also be having an affair with her?

He’s shown to be a gaslighter and cheat – so could he be cheating on Becky too?

Caroline says she’s been going to a Pilates class every lunchtime – while Jake says he’s been taking photos for their daughter’s school project. But could there be more to the story? 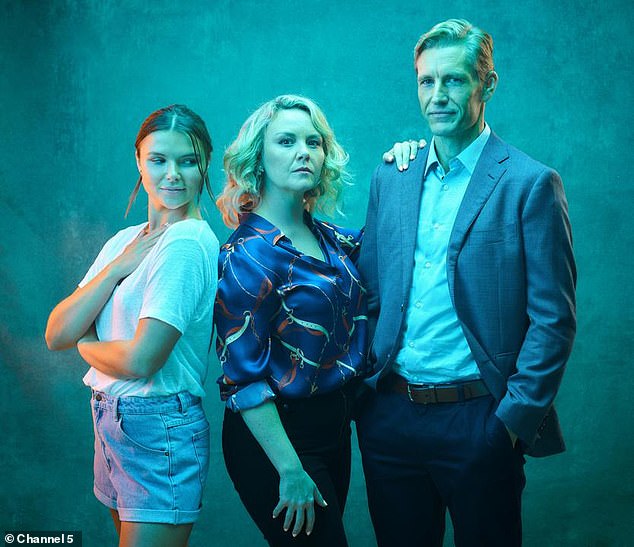 Jake (right) has really hidden his mistress (left) in plain sight, so will Anna (centre) who has been shown to be a well-educated, professional woman, be able to figure out what’s going on right under her nose?

Is Liam in on it? And what about Jake’s mum?

Gardener Liam has been with Jake and Anna ‘since they moved him’ and ‘helped them unpack’. Could he have uncovered Jake’s secrets at the time?

In the opening scenes, Liam looks all-knowing as he looks over the corpse. He’s also been flirting with Becky, who looked alarmed to see him. Did she know him before he moved in with the family?

And did he witness something the night of the death?

And what about Jake’s mum Cynthia? She turns up unexpectedly and gives her number to the new nanny. With a clear disdain for Anna, could she be in on Jake’s scheme? 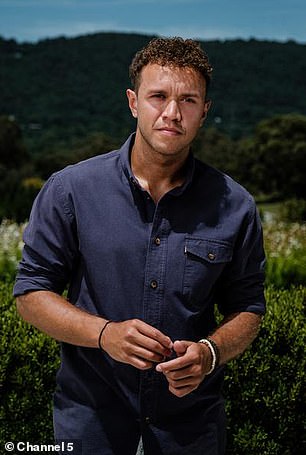 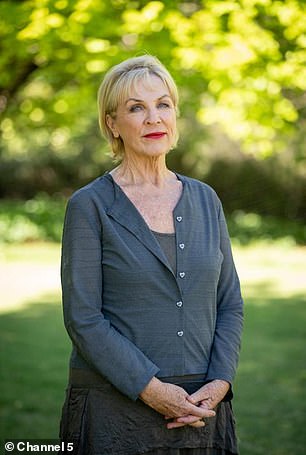 Gardener Liam (left) has been with Jake and Anna ‘since they moved him’ and ‘helped them unpack’. Could he have uncovered Jake’s secrets at the time? And what about Jake’s mum Cynthia (right)? She turns up unexpectedly and gives her number to the new nanny. With a clear disdain for Anna, could she be in on Jake’s scheme?

Why is Becky’s bracelet in the pool?

Anna’s suspicions first arose when she a heart-charm bracelet in her husband car.

When she eventually confronted Jake about it, accusing him of having an affair, he convinced her it belonged to one his colleagues who he gave a lift to.

Becky later reveals to Jake it’s her bracelet, which she dropped when he picked her up from the airport.

In the opening scene – the same bracelet is pulled out of the pool and bagged in evidence by crime scene investigators.

We know Becky isn’t the body – so does this suggest she was the killer? Or maybe it was planted?

Or is it just a red herring? Becky would have been bold to put the bracelet back on after Anna knew it belonged to a ‘mistress’.

Here are some top coronavirus risks when flying