Home » Lifestyle » Why could this Warhol fetch $200 million? And how do you put a price on art?

Andy Warhol’s Shot Sage Blue Marilyn might become the most expensive 20th-century artwork ever to sell at auction. Why?

On May 9 (US time), at the Rockefeller Center in New York, Andy Warhol’s Shot Sage Blue Marilyn might become the most expensive 20th-century artwork ever to sell at auction.

Lot 36 A of the Christie’s auction is officially listed as “estimate on request”. But the instantly recognisable 1964 hand-painted acrylic and silkscreen work – with the film star’s head daubed in bright, surreal tones – is widely reported to come with an in-house estimate of $US200 million ($282 million).

This would put the pop art pioneer in front of Picasso as the last century’s most bankable artist.

The essay accompanying the lot puts it on a pedestal with “the classical beauty of the Venus de Milo” and labels it “a Mona Lisa for the 20th century”, no less.

But still, $200 million? For a coloured-in photo of an actress from a lost screen age, one of many, very similar works created by Warhol? Why? 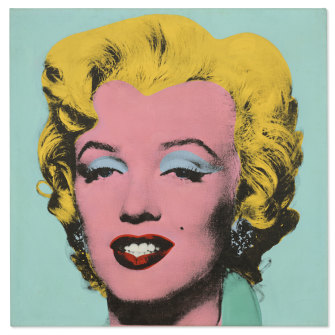 How do you put a value on a work of art?

Geoffrey Smith, chairman of Australian auction house Smith & Singer (formerly Sotheby’s Australia) says coming up with an estimated value of an artwork for an auction is a science involving a lot of effort and experience.

“You have to be able to justify the estimate you assign to a work,” he says. “In essence, you’re selling an argument. You’re presenting a case for consideration.”

Part of the trick is having good contacts. You can look up the records of recent public auctions, but there’s a huge private market only the cognoscenti are aware of. “Unless you’re very entrenched in the industry you won’t know … some of the most significant transactions occur not at public auction but by private treaty,” says Smith.

Warhol’s Orange Marilyn sold privately in 2017 to a hedge fund founder for a rumoured $US250 million. It helps to know that to understand its sibling’s estimate.

But a big part of the trick is knowing what it’s valid to compare your work to.

Art adviser and valuer Catherine Asquith, a former Melbourne gallerist, says you might have to take a look at a different artist from the same generation or movement, if you can’t find another recent sale that seems equivalent.

And even an artwork that seems almost identical can fetch a radically different price. Another Andy Warhol Marilyn, made in 1967 and at first glance very similar to its older sisters, is up for sale at Bonhams in New York in May with an estimated pricetag of between $US200,000 and $US250,000. The auction house calls it “one of the artist’s most coveted examples”. But at that price it’s a thousand times less coveted than the Christie’s one.

Why? Well, there’s more to unpack. 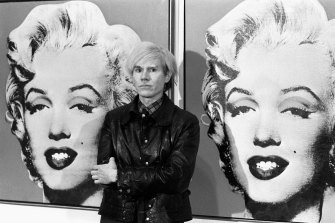 Andy Warhol in front of a double portrait of Marilyn Monroe at the Tate Gallery in 1971. Credit:Getty Images

Does when it was made matter?

Most artists are considered to have high points in their careers: a series or body of work they are particularly renowned for. Think Monet’s Haystacks or Water Lilies – they’re considered the ultimate example of what the artist was all about: what sets them apart. That translates to popularity among collectors – and monetary value.

An early example is often more valuable than a later one. Sidney Nolan painted Ned Kelly for decades, but the highest price tags go on the works from the 1940s, when he was first getting stuck into the bushranger as a visual symbol, when the work was groundbreaking.

And then a supply and demand factor comes into play. Major institutions snapped up almost all the ’40s Nolans, making the remaining few in private hands more valuable each time, and having a halo effect on his next sustained Ned Kelly series in the 1950s. 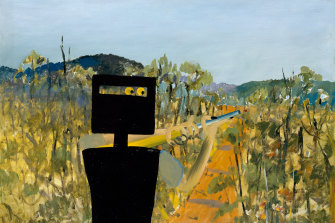 What about the state of the painting?

Shot Sage Blue Marilyn is an exception to a general rule: that you demand perfection in a work that commands millions.

When Warhol started doing Marilyns, he used a fussy silkscreen process with three separate layers that could end up making the work a little blurry. Christie’s work is the result of the artist adopting a new method that allowed more clarity and precision (and one he only used briefly because he found it too much effort).

Soon after making Shot Sage Blue Marilyn, Warhol switched again to a cheaper, more industrial process, and increased the size of his print runs, decreasing both the works’ individual worth and production quality.

But actually, the Christie’s Marilyn was infamously damaged shortly after it was made: it was stacked against a wall at the Factory, Warhol’s studio and headquarters, with three siblings when photographer and performance artist Dorothy Podber asked if she could “shoot” the paintings. Instead of pulling out a camera she pulled out a revolver and fired a bullet through the artworks (this was four years before writer Valerie Solanas took aim at Warhol himself).

Shot Sage Blue Marilyn has a little patch where Warhol’s attempt at repair didn’t quite disguise the hole. However, it just made the Shot paintings more unique: that is, valuable. The Orange Marilyn was another of this set.

Smith says the condition of a work is important but with exceptions. Just like buying a house, if it’s more than 100 years old you’re more forgiving. With older paintings, the quality of the restoration matters: how much of the artist’s own hand remains intact, and how faithful any restoration work has been (this was one of the main points of contention over Salvator Mundi, the so-called “last Leonardo” that smashed records when it fetched nearly half a billion US dollars at auction in 2017).

Why does ‘provenance’ matter?

Provenance, the line of ownership between artist and auction (and the ability to prove it) is important for two main reasons. Firstly, a strong provenance gives a high level of confidence in the work’s authenticity.

“It’s really just the pedigree of the artwork,” says Asquith. “The ideal provenance is always to be able to trace the artwork from the artist’s studio to the current owner.”

But provenance also adds to a work’s lustre and fame. Smith once handled a sale of art from actor Russell Crowe’s collection: he valued a Norman Lindsay, based on usual factors, at between $30,000 and $50,000. It sold for $122,000, and Smith reckons Crowe’s ownership made the difference.

Asquith says a work can gain prestige from being part of a particularly significant collection, put together with “connoisseurship” by someone who knew what they were doing.

Shot Sage Blue Marilyn was picked out by legendary New York advertising executive Leon Kraushar, who assembled what has been recognised as one of the greatest collections of Pop Art ever. It then made its way in the early 1980s to the private collection of Thomas Ammann, one of the art world’s most respected gallery owners and a pre-eminent dealer in Impressionist and 20th-century art, known for discretion and a sophisticated eye.

The rare chance to buy something from his collection, burnished with the glow of his reputation, makes it a “coveted item”, says Asquith, with an element of exclusivity. People pay extra for something hard to find.

It also helps if a work (like this Marilyn) has been loaned to significant public exhibitions, and critiqued in prestigious art journals; and, she says, if a work hasn’t changed hands too often. When a work pops in and out of auction houses too regularly, everyone who’s willing to pay top dollar has already had a go, and expectations fall.

“Death, debt and divorce are usually the reasons for big-ticket items going back to auction,” she says. If she’s seen a work too much, a “market fatigue” sets in and people start worrying about its condition. For top dollar, it has to be a “once in a generation opportunity”.

So, does the artwork have to be any good?

Beauty is ultimately in the eye of the beholder. But the aesthetic value of a work does matter, although Asquith says dealers are uncomfortable talking about the “quality” of a work in too bare terms. She also points out that some subject matters are just … not what you want to put on your wall. Warhol’s electric chair series is critically praised, but more challenging than Marilyn Monroe.

But is there an X factor?

Absolutely, says Smith. “The emotional factor is something which you can never quantify,” he says.

He’s seen a little work he thought he’d put a fair price on sell far past his estimate: a buyer may have a particular sentimental link to the work, or have bid for a similar one before and just missed out.

“You don’t usually know if a work has an X factor until you put it to market,” he says.

does this in spades.

“She is a touchstone for glamour, a kind of nostalgia and sadness,” he says. “A touchstone for American culture and cinema.” When people look at, or buy, art, they want more than a visual experience, they want a story – and the most valuable works come with a big story. Especially at the top end of the market, says Ballard, this can make sale prices hard to predict because it’s very hard to put a value on the emotional pull of a work.

And the heat of an auction can do funny things to a price, too.

“It’s hugely exciting,” he says. “It’s the moment. It’s money. It’s theatre. There are fewer people bidding at this level, but it will be extraordinary to watch.”