Woman, 28, turns cringeworthy Tinder messages into witty power ballads to show how ‘ridiculous’ they are – including a man asking for sex and another promising to make her his ‘queen’

A woman has won a legion of fans on social media after transforming cringeworthy Tinder messages into amusing anthems to highlight just how ‘ridiculous’ they are.

Becky Carewe-Jeffries, 28, who lives in London, came up with the idea of ridiculing toe-curling exchanges through the form of song after being shocked at some of the posts shared on Instagram account Tinder Nightmares.

The avid TikTok user, who boasts over 75,000 followers on the platform, has found popularity after converting the likes of Shakira’s Whenever, Wherever and The Fresh Prince of Bel Air by DJ Jazzy Jeff & The Fresh Prince into witty power ballads.

Speaking exclusively to FEMAIL, Becky explained: ‘I had seen Canadian musician Lubalin’s video where he wrote a song using a conversation between people on Facebook and thought it was a great idea.

‘I thought of all the awful message exchanges I’ve seen over the years between people on Tinder and how turning them into ballads would highlight quite how ridiculous they are.’ 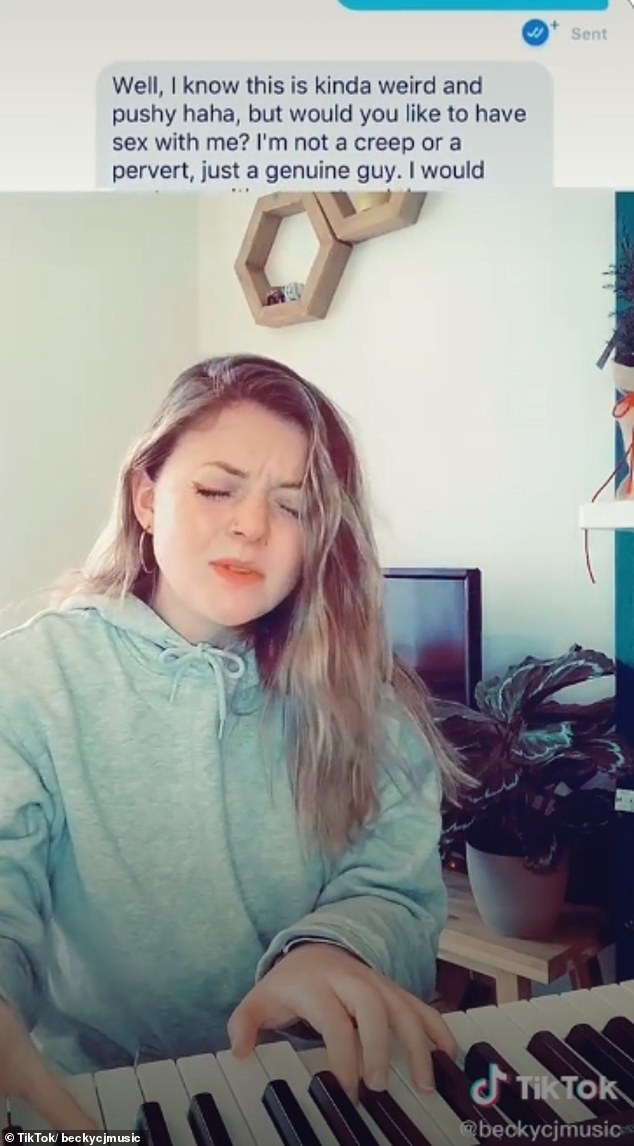 Becky Carewe-Jeffries, 28, (pictured) who lives in London, has gone viral on TikTok after posting a series of Tinder messages which he’s turned into songs

The singer went on to say how she’s racked up millions of views and received comments from people all around the world since starting her dating song series.

Among some of the funniest videos, Becky can be heard serenading her followers by mocking a message sent by a Tinder match asking for sex, and another promising to make her ‘queen of the world.’

‘I have been so surprised by the overwhelming reaction,’ said Becky. ‘I’ve found TikTok to be a really supportive place where comments are incredibly positive, not only to me but also to the people who have had to deal with messages like this in the past.’

‘I felt pressure when deciding what videos should follow up as the original one had had such a great reaction but now that I’ve posted a few times since, I feel better. 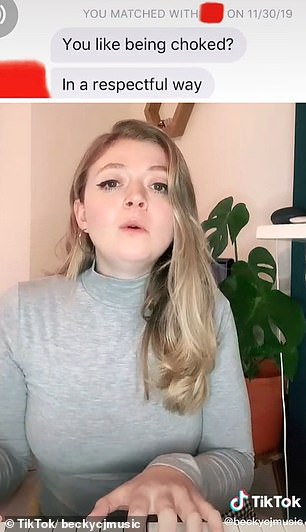 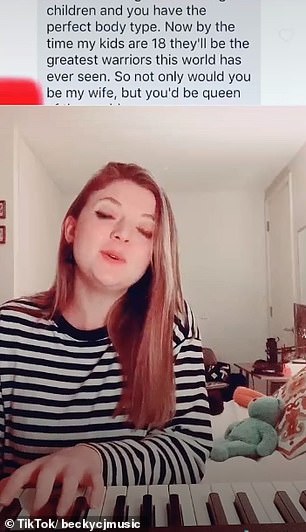 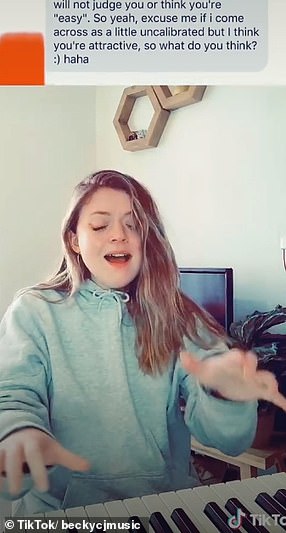 Living in a lonely world

Well I know this is kinda weird and pushy haha, but would you like to have sex with me? I’m not a creep or a pervert, just a genuine guy. I would treat you with respect and the sex would be good. I can even make you s***t if the connection is right haha. I will not judge you or think you’re ‘easy’. So yeah, excuse me if I come across a little uncalibrated but I think you’re attractive, so what do you think? 🙂 haha

Give me a reason why & I might consider it

Honestly you’re perfect for my world domination plan. I need a woman who’ll give me strong children and you have the perfect body type. Now by the time my kids are 18 they’ll be the greatest warriors this world has ever seen. So not only would you be my wife, you’d be queen of the world

In a respectful way

But not too respectful

She continued: ‘As an artist, the pandemic has really impacted my capacity to engage with my audience and share new music.

I hope that through these videos I can reach new people, who will enjoy my original music so that when we can gig again I can perform live for them all.’

‘I also hope the videos continue to highlight the message that these messages are unsolicited and just because people sign up for an app does not mean they have agreed to being approached in this way.’

Many have been quick to take to the comments section to praise Becky’s ‘incredible’ voice and urged her to continue posting dating app-inspired songs.

‘Please do a million more of these! I’d even go back on Tinder just to get you more lyrics,’ wrote one person, while a second penned: ‘This is genius, I’m dying please never stop lmao.’

Becky, who boasts over 75,000 followers, racked up comments from fans urging her to make more dating app inspired videos

A third added: ‘This could’ve played on my radio full of ballads and I wouldn’t have noticed anything odd.’

Another commented: ‘Stumbling across your Tinder TikToks have been my favourite part of today’

Becky initially hoped singing the interactions would increase her following on TikTok , but was left surprised when the platform removed her first attempt because somebody reported the video.

‘It got taken down because someone reported it and obviously thought it was a bit too sordid, which is ridiculous because it’s just talking about sex,’ Becky said, speaking to Huffington Post.

‘There’s definitely this kind of behaviour going on all the time on Tinder and I wanted to highlight how ridiculous it is.’