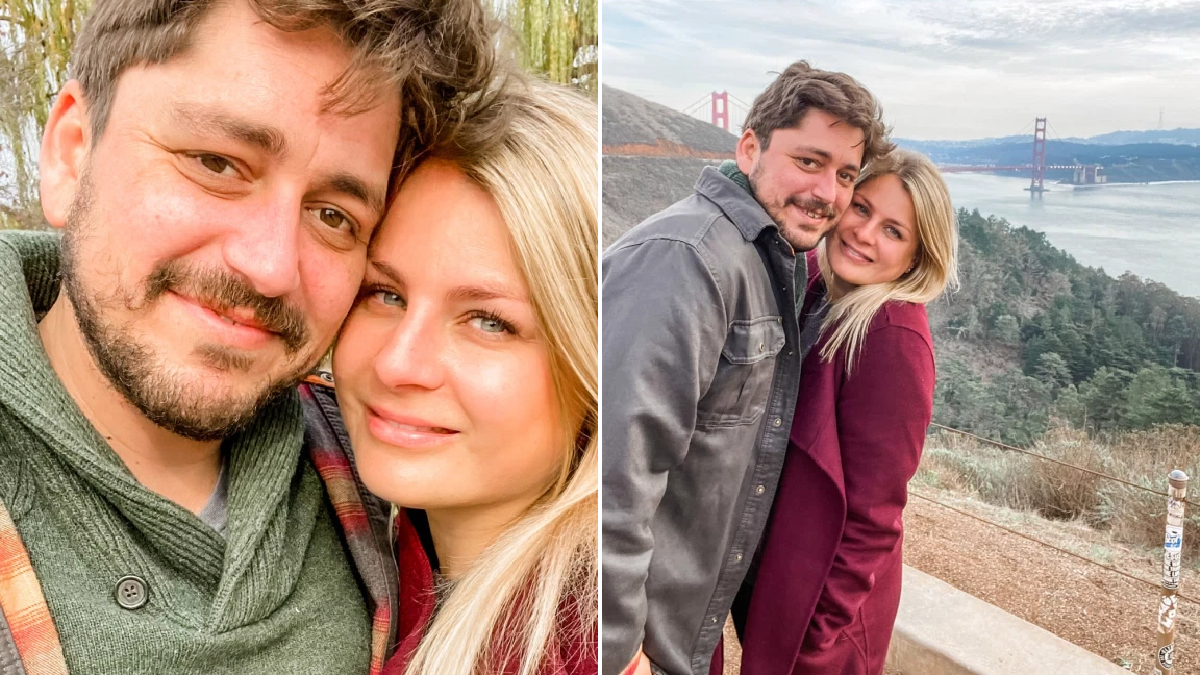 There was immediate chemistry when blogger Rosanna Stevens met audio production sales manager Luciano Marcolongo in a pub in 2017.

After an intense initial few months – followed by a 18-month break – the pair eventually admitted their feelings for one another and got into a long-term relationship, with Rosanna in London and Luciano in the US.

However, in the current Covid climate, Rosanna is now keen to be as close to Luciano as possible and has even moved to Belize – in the hope she’ll be let into the US soon.

The couple first met in a pub garden in Fulham, when Luciano was on a 10-day trip to the UK for a conference.

Luciano asked to sit at Rosanna’s table and things moved quickly from there.

She said: ‘There was this huge thunderstorm and at about 11pm the heavens opened, so everyone in the pub garden was running to huddle under the big canopy umbrellas. We hid underneath one together and that’s when he kissed me.’

From there the sparks started flying and the pair were messaging when Lucinao headed back to the US. Then, out of the blue one Monday morning, he contacted her to say he was in Berlin for another work trip.

Rosanna spontaneously booked the day off work and headed to Berlin – where Luciano took them to a German restaurant for their first date.

She said: ‘It was a really beautiful, warm evening, and we followed the meal with some drinks with his colleagues and did some sightseeing the next day – it was such a whirlwind 24 hours.

‘By 6pm, I had to fly home and I was so sad because I thought I wasn’t going to see Luciano again.

‘I remember composing him a text message to say goodbye in a way that wouldn’t leave me completely heartbroken – that I had a wonderful time, and I’m sure if I ever see you again it will be just as wonderful.’

Following their first date, the couple went their separate ways for 18 months until March 2019, when Rosanna accepted Luciano’s invitation to visit him in San Francisco.

On that trip the pair revealed their true feelings for one another and decided to make their long-distance relationship official.

Rosanna planned to move to the USA for three months in July 2020 and even handed in her notice in at work and found someone to rent her flat.

But then the pandemic struck and threw a spanner in the works.

She said: ‘I was horrified. At Christmas I had decided that I was going to quit my job, rent out my flat and come to California in July and stay for three months. I had already contacted my estate agents to find tenants and booked flights.

‘I think we all thought Covid would be over fairly quickly at that time. I was convinced it would be over by the summer – so I decided to crack on with my plans, but thankfully my job let me stay longer.’

Months apart led the couple to discuss ways Rosanna might be able to come over to the USA – but waiting lists for Green Cards have grown to almost three years, due to the pandemic.

Luciano said: ‘It’s not the distance that’s the main issue, as we’re well used to that.

‘It’s the uncertainty when she heads home after a stay in the States or I leave England of when we’ll next see each other.

‘The current immigration situation in the US is completely backlogged, so it’s even more difficult.

‘It’s incredibly frustrating, but I have faith that our love for each other is strong enough to get past this. We’ll persevere, and our relationship will be better for it.’

Luckily, Rosanna was contacted by a friend living in Belize, who said she was looking for professionals to come and work remotely. This option meant she would be closer to Lucanio.

She said: ‘It felt like a bit of a gift from above. I could spend some time in this beautiful place in the Caribbean and then come back to see Luciano.’

Rosaanna has been living there since the beginning of February and plans to return to the US in a couple of months, when she’s eligible to stay for three months again.

In the meantime, the couple are trying to enjoy virtual Zoom dates, while they await travel restrictions to be lifted.

Get in touch at [email protected]