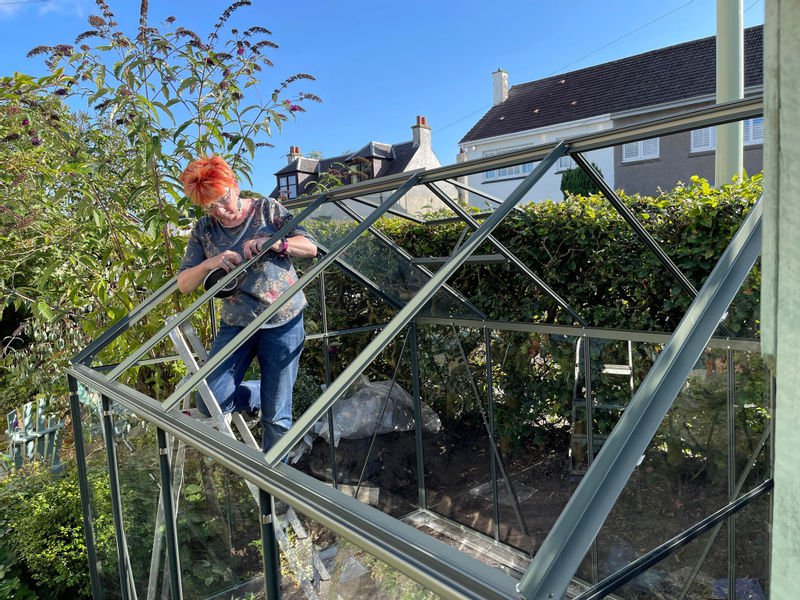 Hilary Hart, 58, is a keen gardener. So when her well-used greenhouse broke, she went straight to get a new one.

She bought a glass replacement for £750, but realised she would also need a base – and may have to pay to have it installed.

The Dundee-based NHS occupational therapist was initially quoted £1,000, with delivery times stretching into the months.

Thinking this somewhat steep, Hilary took matters into her own hands, building her own greenhouse base for one-tenth of the quoted price.

Mum-of-three Hilary told money-saving community LatestDeals.co.uk: ‘I ordered a new greenhouse because the one I had (which used to be my mum’s) was 39 years old and the door had blown off.

‘I had done a temporary fix with a shower curtain, weighted down with heavy glass beads, but it looked terrible, and didn’t keep the heat.

‘I ordered one online, and the delivery time was 18 weeks, so I figured I had plenty of time to get the base sorted.

‘I really struggled to get someone to quote, as a lot of contractors said they were busy doing jobs over the pandemic. I did get one professional who came out and quoted £1000 for a greenhouse base and installation – a lot more than the cost of the greenhouse in the first place.’

The contractor also said it would be ‘a difficult job’ due to the ‘tight space’, which made Hilary think he may ask her to move the greenhouse plot. Not wanting to be ‘coerced’ into losing her favourite sun trap, she got to work herself.

‘I watched lots of YouTube videos to learn how to make concrete and lay greenhouse bases,’ said Hilary.

It wasn’t totally plain sailing. Alongside the tradesperson shortage during the pandemic, other building materials were out of stock for weeks on end while DIYers took the opportunity to renovate in lockdown.

Hilary said: ‘I didn’t realise that there was a cement shortage until I had dug a big hole in the garden. Online delivery prices were extortionate, so I asked everyone I knew if they had any idea where I could get some.

‘I eventually managed to source some from a builders yard 20 miles away, they were really helpful! I picked up three bags of cement from Travis & Perkins in Arbroath for £17.50, then moved on to B&Q for the rest of my supplies.

‘I purchased three bags of sharp sand for £21 and 20 bags of gravel for £53. I also got a plastering trowel for £9 and measuring jugs for £3.50. It did take a few journeys, especially for the sand, as I only have a wee Skoda.’

First, Hilary marked the area out and excavated it, removing the debris and compacting it with a roller. She then laid out the metal base frame (using parts she already) had and levelled it out using a spirit level.

The cement was then mixed – at a ratio of one part cement to five parts ballast – and the savvy mum-of-three spent the next few days laying the foundation while listening to her favourite John Grisham audio books.

Hilary continued: ‘I used a straight piece of timber to compact the concrete and then I levelled it out, ensuring the corners were filled. I then left it to set for four or five days and it was ready to be built on once the greenhouse arrived.’

With the base costing just £100, Hilary is delighted with her savings, adding: ‘I’m so pleased with the result. I think doing it myself was just a great feeling.’