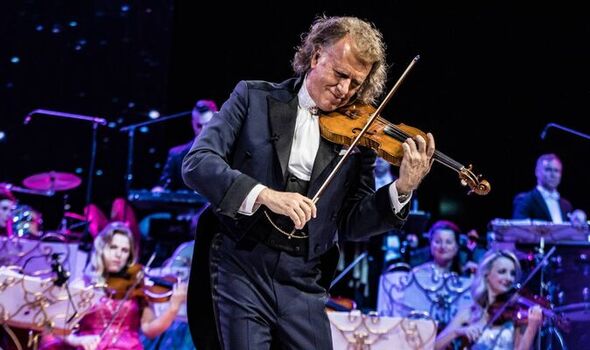 They are famous for their fabulously romantic spectaculars which see ecstatic audiences getting to their feet and waltzing in the aisles. And love is most definitely in the air where André’s musicians and singers are concerned.

“There are 13 married couples in my orchestra who met through playing for me, and many children have been born as a result – I’m a bit like a matchmaker!” André reveals via Zoom from his home in Maastricht in the Netherlands. “It all adds to the romantic atmosphere.”

“Most of my musicians have been with me for 25 years and we really are like a close-knit family. They could go elsewhere and play with other orchestras but they chose to stay with me. On tour, I’m like the father with my children.”

“It’s like I have two families – my private one with my wife Marjorie and our two grown-up sons, their partners and our five grandchildren – and my big family which is my orchestra.”

“We have a rule that we never go away from home for longer than two weeks, and then we come back so the families can stay intact. That’s very important for me, you know? I’m a family guy.”

The fact that he’s been happily married to Marjorie for 47 years is proof of that particular pudding. 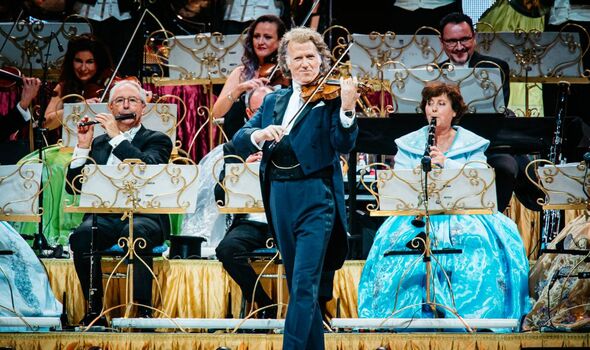 André is currently touring in the Netherlands, but he’ll be back in the UK next spring. If you can’t wait that long, his Happy Days Are Here Again extravaganza – to be filmed in Maastricht’s pretty, tree-lined Vrijthof square later this month – is being screened in cinemas across the UK in August.

Although he loves touring and playing to audiences worldwide, there must be something extra special about playing to his home crowd?

“There is,” the Dutchman admits. “Simply because I’m playing in the city where I was born and bred, and still live. I know, of course, many, many people in the audience and they know me.”

“One member of the Maastricht audience was very special, although sadly she passed away aged 105 in 2019.”

“Sister Leona – a nun – was my biggest and oldest fan. When she first started coming to my concerts in Maastricht, she would sneak out of the convent to see us and then she’d get into trouble with the head nun! I would always come down from the stage to waltz with her.”

Once they achieve success, many musicians move from their home towns to big, international cities. Has André never been tempted to relocate to New York or London?

“Never,” he replies. ”Why would I move? Maastricht really is the most fantastic place. It’s beautiful and there is no traffic – not like there is in New York or London, anyway.

‘There 13 couples orchestra… a bit matchmaker’

“It takes me about five minutes to drive from my house to my studio. The airport is 10 minutes away so that’s ideal, too. As a musician, I feel it’s also important tant for me to stay close to my ” roots and this is reflected in my work and my music.”

“Even the Maastricht weather and I have a special connection. In 25 years of “doing my concerts in the Vrijthof Square, it has only rained once or twice. They call it ‘André Rieu’ weather.”

It’s a surprise to hear that the maestro still gets nervous “before every performance. “It’s simply because every concert that beforehand “ 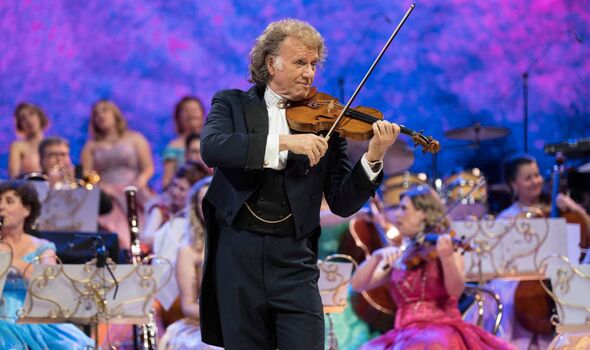 “we play is a pressure situation beforehand,” he explains. “When you are not nervous before you go out onto the stage, the audience will feel that and say, ‘Oh, he is on automatic pilot today’.”

“I am never on automatic pilot when I perform and I always want it to be perfect. We love the music we are playing – that goes without saying – but for me, the biggest ” thrill is the interaction with the people who come to see us.

“To witness our audiences with their arms around each other, laughing, singing and swaying along to the music we’re making, brings me such pleasure. It’s a wondrous feeling to be up there, spreading goodwill, love and joy.

“We play music that touches people’s hearts and music has the ability to bring us together like nothing else. We take music to the people and rejoice in it. Every night, we have a party and celebrate.

“Of course, the Johann Strauss Orchestra loves to play the waltzes but our family of musicians can play anything, so we provide a big selection of favourites, from the classics to movie music, to pop and rock ‘n’ roll. We like to have fun, and anything can happen but we always celebrate the music, never take anything away from it.”

The statistics speak for themselves. He has sold a massive 40 million CDs and DVDs and notched up 30 No 1 chart positions worldwide. He has received over 500 platinum awards, three Classical Brit Awards for Album of the Year and billions of YouTube views.

“My fans are wonderful and very, very loyal,” he says. “The concerts we are performing at the moment are ones which were cancelled due to the pandemic.”

“Everyone who bought a ticket for these original concerts was offered a refund when Covid meant they had to be cancelled but nearly every ticket holder said they would wait for the concerts to be rescheduled. Many even wrote to me saying, ‘We’ll wait for you, André, even if it takes five years’. Wow! That was very heartwarming.”

But while André is adored by his fans, the world of classical music has been known to sometimes look down on him and his music. Does it bother him?

“Not anymore,” he shrugs. “The classical music world often is so, so snobbish. I don’t listen to them. Purists criticise everyone who plays classical music for people in an arena or stadium. I do what I feel is right. My music is about love, joy and happiness.”

The fact that the King of Waltz never has to advertise to recruit new musicians for his orchestra and chorus of singers speaks to volumes. 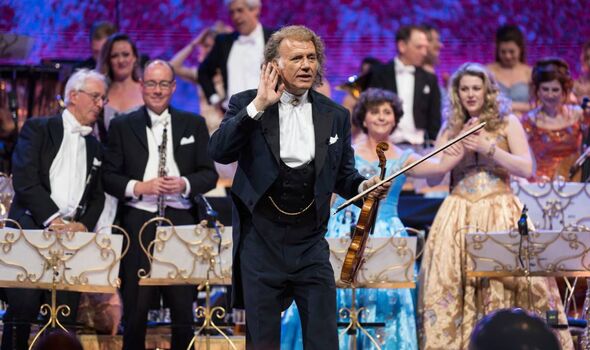 “They come to me,” he says. “I remember that once my saxophone player said to me, ‘I know a girl who lives here in Maastricht, she is a singer, she is beautiful, she is so nice and she sings so good,’ and I said, OK, bring her along to meet me.”

“At that time, we were not looking for anybody new, but she was right, so I said, ‘OK come with us’ and she did. That is how it usually works for me, so I never advertise, simply because I have never needed too.”

André is 72 now – the age by which most of us have already retired or are certainly thinking about it. He’s not about to put down his priceless Stradivarius violin in favour of a pipe and slippers, though.

“No! I don’t understand the word ‘retirement’. How can you retire from music? It is like oxygen to me. Music is inside you and it will never leave you, no matter how old you are.

“I could never stop playing music and if I am able to play, then I am able to give the gift of music to people of all kinds, from all places.

“Making music is the only thing I can do, so it is my ambition to go on and on. So long as I am healthy, I want to carry on forever!”

To book tickets and for more information about where to see The Johann Strauss Orchestra go to www.andrerieu.com

The One Direction Song That Was Actually Written By Kelly Clarkson