Home » Music » Charli D’Amelio is losing followers after complaining about not hitting 100 million, and being rude to a private chef 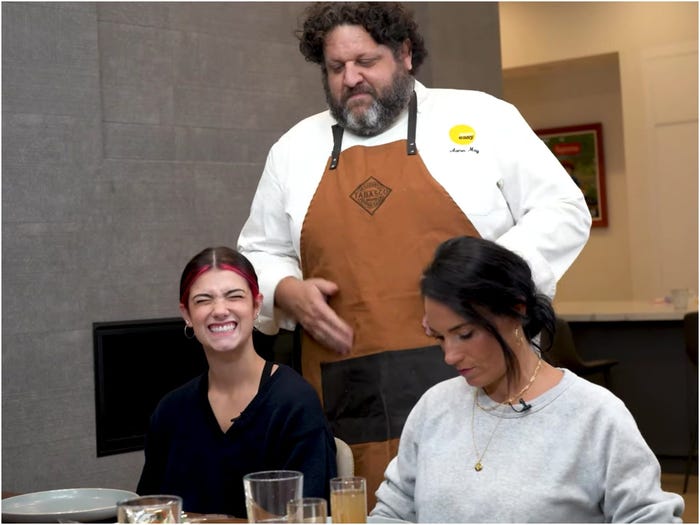 Charli D'Amelio's reign as the biggest TikTok star in the world has faltered slightly since losing over 300,000 subscribers in three days.

D'Amelio, 16, was well on her way to hitting the 100 million milestone, but started bleeding followers after a video was posted on her family's YouTube channel in which some thought her behavior was "rude" and "entitled."

The D'Amelio's sat down for dinner in anticipation of a mystery guest, who turned out to be beauty influencer, James Charles. Chef Aaron May then cooked them several courses, including a traditional paella.

It didn't go down very well with Charli and her sister Dixie, 19, though, who made faces at each other to indicate their dislike of the menu. Dixie then found a snail on her plate, smelled it, and started gagging.

"What is that?" Dixie mouthed silently, then yelled: "What is this?"

May confirmed it was a snail, that it was a classic ingredient in paella, and said it was "an omen of good luck and fortune."

Dixie then tried it and immediately vomited over the side of her chair.

"So dramatic," said the D'Amelio's mother Heidi. "Get up, excuse yourself."

While Dixie was continuing to gag outside, Charli then asked: "Do we have any dino nuggets?"

The girls' behavior was called "disrespectful" and "embarrassing" by viewers.

"This is not cute or anything, the D'Amelios are rude, ungrateful and disrespectful!" says another. "James is the only one who has any respect."

'Why did we give them this platform?'

Later in the video, Charli was talking about how she wanted to hit 100 million followers a year after hitting 1 million, which some people thought sounded like complaining. Even Charles asked her: "Was the 99 mil' not enough for you?"

Others commented that they couldn't believe the fame Charli and Dixie have already — about 99 million and 43 million TikTok followers respectively.

"The fact that over 99 MILLION people took time out of their days to focus on her and follow her is annoying me at this point," one comment reads.

"They didn't even have table manners," said another. "Their parents and James wore something nicer than them when they [have] nice stuff in their closet. They wore sweatshirts. They put their knees up at the table and Dixie spit out a snail. That's just disgusting and disrespectful. Why did we give them this platform?"

At the time of writing, Charli's follower count is still going down, while Dixie's is going up.

Dixie explained her behavior in a TikTok, where she said she was receiving hate for a "15 second out of context clip." She said the snail was a prank from her team, knowing she would have that reaction.

However, the sisters have both limited comments on their Instagram pages.

-video…anyways, not posting this for any other reason than to share the truth of something that was ridiculously blown out of proportion…