Home » Music » Jeffree Star’s makeup empire isn’t what it used to be, with videos that don’t hit 1 million views and makeup in TJ Maxx 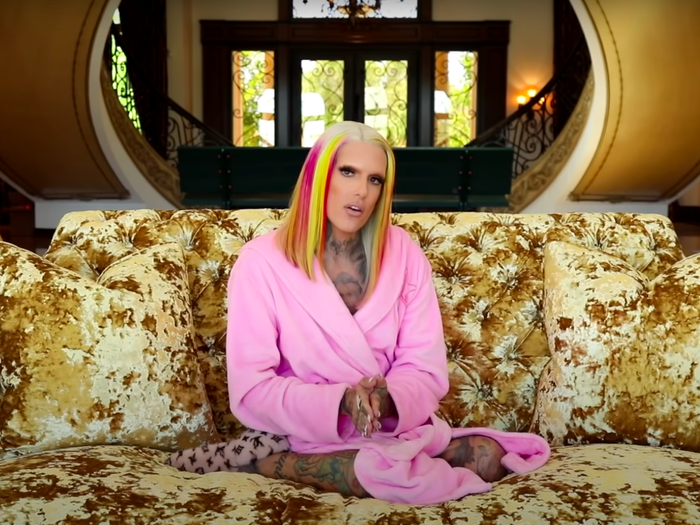 For more than a decade, beauty guru Jeffree Star has balanced public controversy with career growth. Despite making enemies and having a contentious reputation, his social media platform and net worth have only grown.

But in 2020, after a year of scandals, it seems like Star may be facing consequences.

Critics have noticed that Star's engagement on social media is down, his latest Jeffree Star Cosmetics makeup collection hasn't sold out, and some of his older palettes are being sold for reduced prices at TJ Maxx — something Star has mocked other beauty entrepreneurs for in the past.

Star's most recent YouTube video, a collaboration with drag queen India Ferrah posted on November 15, had under 1 million views at the time of this article's publication. That means the video failed to surpass 1 million views within a full week of uploading, and Star hasn't had a video perform at that level since 2016. On Ferrah's tweet announcing the collaboration, there as twice as many negative comments as positive ones.

It's not just his social media engagement that seems to be on the downturn. Star's cosmetics company is now being sold in TJ Maxx, a bargain retail chain known for re-selling outdated and undersold luxury makeup. Star previously mocked his ex-best friend Kat Von D for having her products sold in TJ Maxx stores, tweeting "KVD will be a TJ MAXXX exclusive in 2019 I heard!!" in December 2018.

He also quote-tweeted a picture of Kat Von D's palettes at Marshalls (owned by the same parent company as TJ Maxx)  at the same time and wrote "CAN'T REALTE [sic]. AT. ALL"

Star's disdain for TJ Maxx makeup products is so well-known, in fact, that he made an entire YouTube video in February 2019 about it. "In today's video, I'm so scared," Star said at the time. "This is probably going to be the scariest video on my channel. Today, we're going to TJ Maxx."

The products that have been spotted at TJ Maxx from Star's line are items from the Conspiracy collection, which was the most sought-after makeup product in the world during its November 2019 launch. The collection was with YouTuber Shane Dawson, and it was booted from makeup seller Morphe after Dawson was publicly criticized by fans in the summer of 2020 for past comments that people said were racist or inappropriate towards children.

TJ Maxx has not responded to Insider to confirm whether or not it is currently selling Star's line, but TikTok and YouTube videos showing the products in stores continue to go viral.

Star has released several makeup collections since the Conspiracy collection, and they haven't performed nearly as well as when shoppers lined up for hours ahead of the Dawson collaboration's release. Star's most recent launch, the Blood Money collection, hasn't sold out more than two weeks after its release, according to his website.

It seems like Star's reputation is finally catching up to him

So what turned people against Star? 2020 has been a year full of controversies for the YouTuber and makeup entrepreneur.

During the summer, as his collaborator Dawson faced consequences and backlash for his past comments, Star himself had his own reckoning. YouTube influencers and followers began to call out Star for his previous problematic behavior and comments as well. The YouTube community imploded after Tati Westbook accused both Star and Dawson of manipulating her into attacking Star's YouTube rival James Charles with claims of predatory behavior in 2019.

In August, Star apologized to Charles for their ongoing feud. The apology video appeared to be Star's way of limiting the backlash against him, but many found the apology too vague to be meaningful.

During the worsening scandal, Dawson and Star's old racist posts were brought up. While Star denied claims that he is racist, his followers have pointed out that in the past, Star has used racial slurs and performed in racist skits. More recently, fans accused Star of "tokenizing" Black beauty gurus.

Then in October, an Insider report also unearthed accusations of sexual assault, physical violence, and $10,000 hush-money offers that Star denied through his attorneys. He didn't address the report publicly.

The combination of scandals appears to have impacted Star's reputation. The beauty YouTuber is currently preparing for his Black Friday sale, but where there used to be plenty of internet buzz, there's now barely a whisper.

Christina Aguilera and More Stars to Perform at the 2019 AMAs