Liz Hurley had fans begging for her to be the next Bond girl as she frolicked in a barely-there bikini.

The 57-year-old looked incredible during a wild breakaway to the Maldives, in which she stripped to a tiny turquoise two-piece to splash through the aqua blue sea.

Dancing to Selena Gomez’s hit Ring, Liz jiggled her incredible curves in the swimsuit, which was dotted with silver gems over the bust and held together by a single piece of string.

Her tiny bottoms risked a major wardrobe malfunction as Liz ran into the sea from the white sand beach. 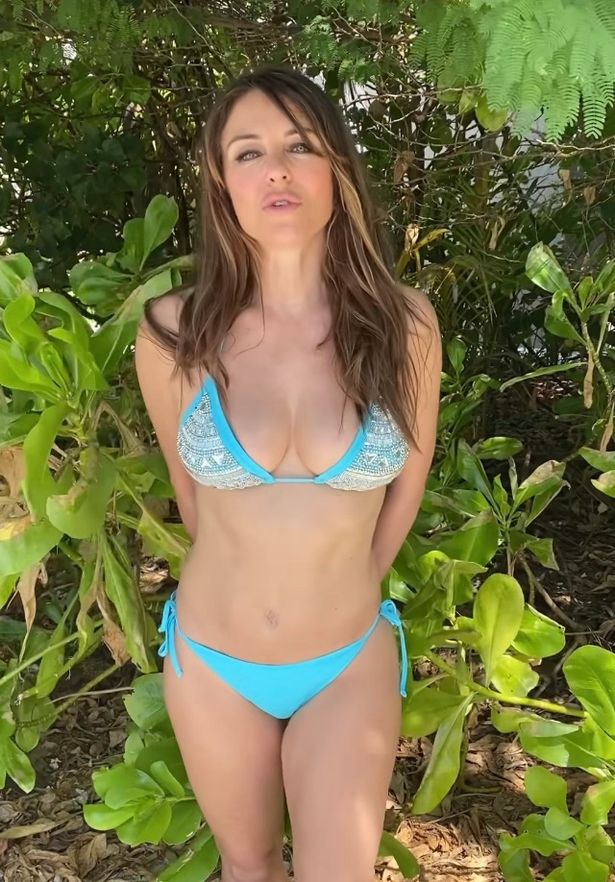 Liz let her dark brunette tresses flow free down her back as she showed off her rippling abs and toned thighs for the saucy video, adding a pair of dark aviator shades to her ensemble to keep the sun out of her eyes.

Liz exposed a healthy dose of under-boob in the incredible video as she danced in the sea, telling fans: “Good morning! It’s a beautiful morning.”

Liz simply captioned her snap #Maldives with a heart emoji as fans flocked to the comments section.

One penned: “Boy, did Hugh Grant blow it!” as another said: “Making 57 years old look amazing!” “Reminds me of a Bond girl prancing in the waves,” a third social media user gushed.

As a fourth said: “One of the hottest women alive today!”

Someone else said: “The epitome of beauty,” as one of Liz’s cheeky followers told her: “I would love to be your toyboy but people would think you were my daughter!”

It comes after Liz denied being the cougar who “spanked Prince Harry’s a**” and took his virginity. Leaks from his new memoir Spare detailed Harry’s dalliance with the unknown woman in a field behind a “very busy pub”.

Harry wrote: “I suspected he was referring to my recent loss of virginity, a humiliating episode with an older woman who liked macho horses and who treated me like a young stallion".

Describing the hurried coupling, he went on: "I mounted her quickly, after which she spanked my a** and sent me away.

"One of my many mistakes was letting it happen in a field, just behind a very busy pub. No doubt someone had seen us."

But Liz confirmed to The Times: “Not me, not guilty, ha," before adding: "No, not me. Absolutely not."