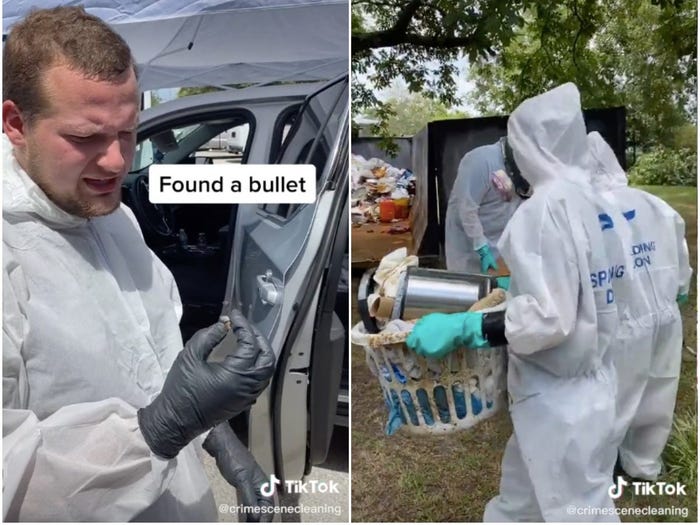 "We are here at the scene of a murder-suicide where a 53-year-old husband shot his 41-year-old wife, likely in bed," Laura Spaulding says.

The camera pans from her face to a small bedroom where several workers in white hazmat suits and gas masks are removing a blood-soaked mattress.

This is not a movie. It is a rare glimpse into the gruesome work of crime scene cleaners — and it's all available on TikTok.

Spaulding is the founder of the crime scene cleanup franchise Spaulding Decon, which has its headquarters in Tampa, Florida but has over 45 businesses across the US.

For 15 years, Spaulding Decon has specialized in everything from biohazards, water restoration, and mold removal to hoarding, crime scene, and drug lab clean-ups.

But it was only when the business decided to start a TikTok channel earlier this year that their work really started to get recognized.

Spaulding Decon's Tik Tok channel got more than 2.5 million followers in its first three-and-a-half weeks, and today is just short of 3 million.

In a recent interview with Insider, Spaulding said she wanted to share the videos on social media to "educate" people interested in true crime.

"True Crime is a very hot topic. Podcasts, documentaries, and TV shows do really well," she continued. "And this is a side of true crime that has never really been shown or discussed, so I think people are very interested in how it's handled, how it's cleaned up, or how you handle odors, for example," Spaulding told Insider on the phone.

"We don't really hold anything back"

After plans to do a reality television show fell through eight years ago, Spaulding decided to take matters into her own hands by using social media to give people an inside look into what her team of professional cleaners does.

Our friends down south are taking on a level 5 ##hoard. ##spauldingdecon ##crimescenecleaning ##franchisee ##fyp

The founder hired an in-house video crew, which is sent out to the location to capture some of the business's more interesting jobs, with the client's permission.

Often the team tries to find out the gritty details behind what exactly happened or who died in the houses.

Some videos show suited-up cleaners scraping and mopping away blood or other bodily fluids in a homicide or suicide case. These often come with warning labels reading "BLOOD" or "GRAPHIC CONTENT."

Others give a behind-the-scenes glimpse into what a cleanup operation looks like in houses of hoarders – complete with fridges overflowing with rotting food, moldy walls, and so-called "beer mountains."

"We don't really hold anything back. There is no censorship. We try to give them a really raw view of every situation that we deal with," Spaulding said.

Spaulding hopes that with the platform's help, she can give a glimpse into a business that is often not spoken about or forgotten.

"We're people too. It's not like we just come in with white suits and don't have feelings or anything. We have a desire to help people and when we clean up houses, it's like instant gratification," she said.

"Some of these houses are in really bad shape, so it's nice when we can turn them into gems again."

TikTok, which was condemned in July for taking two days to remove footage of a group of teenagers discovering human remains inside a suitcase, has no specific community guidelines about showing crime scenes.

The platform has restrictions on depicting "violence and graphic content" but allows educational content, even if this includes medical procedures, for example.

"We do not allow violent and graphic content on our platform, and we will remove content that violates our guidelines," a TikTok spokesperson told Insider.

"We do allow content that is designed to educate audiences, whether that is learning a new skill or learning about a different industry or field of work. We constantly review our policies to ensure that we are keeping TikTok a safe place for our users to express their creativity," they added.

When asked about the critics who feel like the content is too gruesome for the platform, Spaulding said: "You're always going to get critics, and that's fine. This is America: If you don't like it, don't watch it."

"That's the biggest thing that we think is hilarious. The few people that do complain, the fans will jump on them and say: 'Why the hell are you here then? Get off. We like it," she said.

Spaulding is right: most people that watch their content on TikTok are invested and enthusiastic, using the comment section to ask different questions, point out details that workers might have missed, and share their amazement.

Some have even started reaching out to Spaulding Decon for work opportunities.

"We saw a big spike in people looking for employment," said Spaulding. "All of our employees also tell us they've been recognized everywhere they go."

Homelessness, breakdowns and Hollywood… what came next for the lads’ mag babes