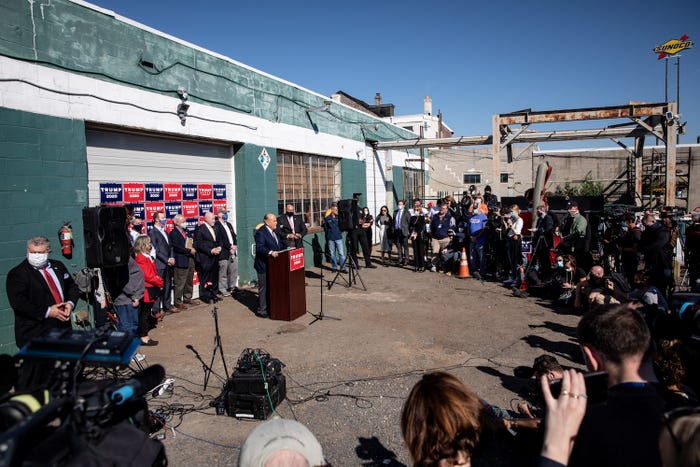 President Donald Trump said in a since-deleted Saturday morning tweet that his legal team, who say they're challenging President-elect Joe Biden's victory in court, would host a press conference at the Four Seasons. Rather than the luxury hotel, though, the conference ended up in the parking lot of Four Seasons Total Landscaping, a landscaping company, in Philadelphia.

On Monday, it remains unclear why the Trump campaign elected to hold its press conference at Four Seasons Total Landscaping, which has no relation to the hotel.

Even the company's sales director doesn't know why the Trump campaign chose his store for its press conference, telling The Washington Post, "I have no idea why [the campaign] wanted to do it here. I don't know how the government works. Maybe they saw on satellite images that we have a big back lot and proximity to 95?" But the landscaping company, which is located next to an adult book store called Fantasy Island, has since begun selling merchandise to capitalize off of the Trump event.

Trump was not present at the press conference, as he was golfing at the time. Earlier that day, President-elect Biden was projected as the election's winner by CNN, MSNBC, Fox News, The New York Times, and other news outlets.

Four Seasons Total Landscaping easily became the best joke on Twitter over the weekend, as people marveled over the Trump campaign's error.

Many people pointed out just how absurd the apparent error turned out to be.

Comedy writer Zach Bornstein said that the situation was so funny, he could never craft a joke as good as this.

Actor George Takei referenced HBO's "Veep," tweeting, "Kudos to the 2020 writers for dropping in the Pfizer vaccine news a week after the election, and having Rudy Giuliani stuck in a parking lot at Four Seasons Total Landscaping having a true Selina Meyer moment between a sex shop and a crematorium."

Joyce White Vance, an MSNBC legal analyst and former US attorney, tried out an image of the Four Seasons parking lot as her Zoom background.

Many of the best memes from the incident focused on what Trump expected he'd see from his Four Seasons event versus how it actually went. "Guys be like 'i know a spot' and take you to four seasons total landscaping," one tweet said.

Many people also made parody videos joking about the Four Seasons debacle, as The Daily Dot reported.

The truth about Kelly Clarkson and Brandon Blackstock’s custody agreement

Tom Jones incredible footage with lover Mary Wilson, who admitted ‘I was in love with him’