The band KISS has been bringing rock music to the airwaves (and now, streaming services) since the mid-’70s. Known for their iconic white face makeup, the band was formed in New York City in 1973 by Paul Stanley, Gene Simmons, Ace Frehley, and Peter Criss. The band can trace its roots to a band called Wicked Lester that Stanley and Simmons belonged to, per KISS’ official website.

As legend (and the band’s own oral history) has it, Simmons and Stanley didn’t like the direction Wicked Lester was going in and left the band in 1972. According to KISS’ website, that same year, Simmons happened to see an ad in Rolling Stone that Criss had placed selling himself as a drummer “looking to do anything to make it.” Criss auditioned and was welcomed into the band. Then in early 1973, lead guitarist Ace Frehley joined the group. They dropped the name Wicked Lester and become KISS at the suggestion of Stanley.

The band’s name was rendered in capital letters from the beginning, leading people to speculate as to what it stands for. What’s the true meaning behind KISS’ band name? Keep reading to find out.

This one rumor about KISS' band name has lasted for years 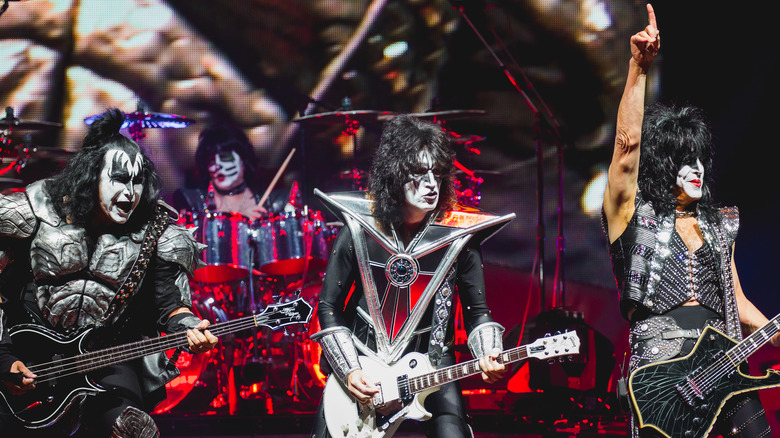 For many, many, many years, rumor had it that KISS stood for “Knights In Satan’s Service,” causing many conservative parents to wring their hands when their kids got into KISS’ music. To be fair, their intense makeup, Gene Simmons’ absurdly long tongue, and the fact that their performances featured band members spewing fire didn’t help dispel this rumor. But according to Snopes (and the band members), this is simply not true.

The real story is quite a bit more innocent than the main rumor about KISS’ name. When Peter Criss joined the band, he mentioned that he used to be in a band called Lips. According to Criss’ memoir, Makeup to Breakup, this inspired Paul Stanley to call the band KISS. But Criss was against it at first, saying, “Get the f*** out of here. That’s a terrible … name” (per Rolling Stone). But he later relented, noting, “Good kissing makes for good laying. It’s sexual, it’s cool.”

So there you have it: The origin of KISS’ band name is about as opposite from “Knights In Satan’s Service” as possible!