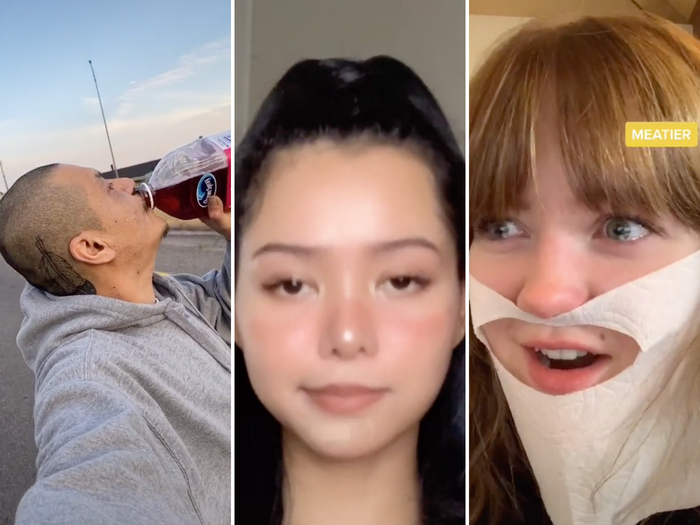 TikTok, the viral short-form video app, has been one of the driving cultural forces in 2020. From becoming the launching pad of big-name influencers like Charli D'Amelio, Addison Rae, and Bella Poarch to helping propel hits like Roddy Rich's "The Box" or Doja Cat's "Say So" to the top of the Billboard Charts, the app's influence is undeniable.

Its culture also moves incredibly fast, and there's been a wide variety of videos, trends, and sounds to keep track of that are sure to give you at least a bit of whiplash if you haven't been keeping up all year. If you're not a habitual user of the app itself, you might be the most familiar with some of TikTok's most viral videos, which have gained millions of views not only on the app itself, but also on other social media platforms like Twitter.

These are the top 10 viral TikTok videos in 2020, according to TikTok's Top 100 report, published today.

10. A goose throws it back with @hartyt_

In this video from @hartyt_, a goose throws it back to Cookiee Kawaii's "Vibe." This video has amassed approximately 3.3 million likes to date.

9. @thejulianbass transforms himself into his favorite superheroes

@thejulianbass amazed audiences with editing skills that transformed him into superheroes like Ben 10 and Spiderman. The video has amassed over 2.7 million likes on TikTok, and also went viral on Twitter, racking up 25 million views and 1.4 million likes.

@iamtabithabrown's incredible recipe for making "carrot bacon" was a winner — the video has amassed approximately 3.6 million likes on TikTok.

A misunderstanding between the words "meteor" and "meatier" leads to the extinction of the dinosaurs in this viral video. Yes, those are real tears, creator Eliza Peterson told Insider. Her video has amassed approximately 4.3 million likes on TikTok to date and went viral on Twitter as well.

This video of an animated llama dancing to the "mi pan" TikTok sound has over 17.6 million likes to date and helped turn the audio into a hit on the app. The plot twist — the sound is actually a pitched-up version of a rendition of a Russian Miel Pops commercial sung by @chernaya.princessa.

5. @willsmith does the "Wipe" trend

I don’t remember making this…? @chrisashley

Actor Will Smith makes a reference to his character in "Men in Black," who carries a device that can erase memories.  In it, Smith does the "Wipe it Down" challenge; the video has 18.9 million likes.

4. Jalaiah Harmon does the "Renegade"

In this video, @itscaitlinhello acts as your least favorite coworker during Zoom meetings. The video, which has over 618,000 likes to date, is part of her talent of "portraying characters that people hate," she told Insider.

In this video, Nathan Apodaca — also known as @420doggface208 — longboards along the highway while listening to Fleetwood Mac's "Dreams." Not only did Apodaca's video, which has approximately 11.7 million likes, bring both Mick Fleetwood and Stevie Nicks to TikTok, it also got him a new truck from Ocean Spray and helped him towards making a down payment for a house, he told Insider.

1. Bella Poarch's "M to the B" lipsync video

Bella Poarch captivated audiences with her zoomed-in, lip-sync style and precision, and her "M to the B" video is now the most-liked TikTok video of all time. It has over 43 million likes to date.

The truth about Taylor Swift’s relationship with Jack Antonoff