Home » Music » TikToker Addison Rae has become a close friend of the Kardashians, and now she’s in a new Skims ad 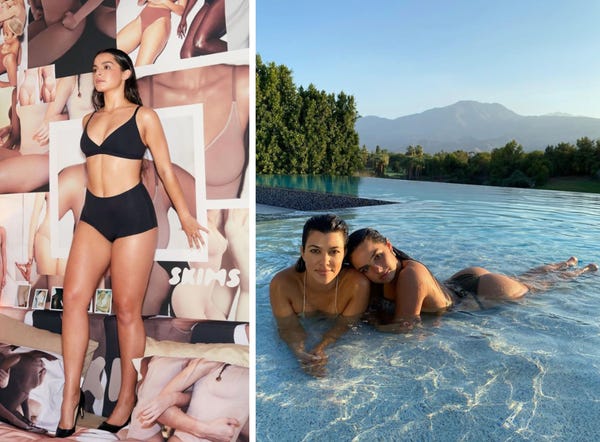 Before TikTok stars rose up to become Gen Z's favorite internet celebrities, the Kardashian-Jenners paved the way for how influencers look, act, and make money. Out of TikTok's elite, one has already proven herself worthy of crossing over to the mainstream, rubbing elbows with Instagram's royalty: Addison Rae.

Just one year ago, Addison Rae Easterling, who is usually referred to by her first and middle name online (or, after her awkward Genuis interview, as "bad bleep"), was an incoming freshman at Louisiana State University after failing to make it onto the SEC school's dance team.

Now, Easterling is an A-list influencer and reportedly makes more money off TikTok than anyone else, even reigning dancing queen Charli D'Amelio. And Easterling followed the trajectory of her TikTok fame straight to Calabasas, where she's become besties with none other than Kourtney Kardashian. Here's how the star-crossed friendship became a thing, and how Easterling has already been slotted into the Kardashian family's marketing plan.

By impressing the second generation of Kardashians, Easterling was able to break bread with the family's stars

Easterling's nearly 30 million Instagram followers were accumulated over the course of less than a calendar year. After posting herself dancing to TikTok instead of with the Tiger Girls, Easterling racked up almost 60 million followers on the app. She caught the eye of the Hype House and she also grabbed the attention of Mason Disick, son of Kourtney Kardashian and Scott Disick.

today is a beautiful day

The reality stars' oldest son, age 10, is an avid TikTok user who even put forth an effort to start his own TikTok house called the "Young Baller Savages."

During a splashy Instagram Live in March 2020 that resulted in his account being revoked by his parents, Disick praised Easterling's rendition of the "Skinny Legend Anthem" track that was a TikTok trend at the time. So the YouTuber David Dobrik, frontman of the "Vlog Squad" and celebrity-influencer crossover king, made the introduction between Easterling and Disick.

Dobrik had already established a friendship with the Kardashians and Jenners, having had Kendall and Kylie Jenner guest star on his YouTube channel multiple times. In January, Dobrik helped Disick launch his TikTok account, and three months later he returned with Easterling in tow, she told Forbes' Tom Ward.

"I kind of just stuck around and we got really close," Easterling told Ward about Disick's mom. "We started working out together. We did a video on her YouTube of us doing a butt workout and stuff, so that was fun."

The relationship's birth was, of course, documented on TikTok. There's a March TikTok on Easterling's page of her, Dobrik, and Disick all dancing together.

For influencers from all walks of life, collaborations are a free-for-all to build each other's brand recognition and entertain fans with cutesy meet-ups. From the very beginning of their friendship, Kardashian and Easterling used each other to their advantage. This was solidified when Easterling appeared on Kardashian's YouTube channel to share her workout routine.

While Kardashian may have a long-running reality show that just about everyone on the planet is well aware of, she doesn't have the cross-platform following that her younger peers do. Kardashian has just over 200,000 YouTube subscribers, where she's trying to build a video brand for her lifestyle company Poosh.

Easterling, on the other hand, already has nearly 4 million YouTube subscribers, and her videos are constantly trending. In fact, her appearance on Kardashian's YouTube channel is the most-watched video of Kardashian's by far. It has 4 million views, while the next most popular video has just 1.8 million and co-stars Kendall Jenner.

As Kardashian and Easterling cemented their friendship, they also solidified a sequence of low-key advertising opportunities

While Easterling may bring social media metric value to the Kardashians, Kourtney has brought Addison Rae nothing but clout. "Clout" is a term used in the influencer community and beyond, referring generally to when someone's name recognition gives another person they're dating, hanging out with, or feuding with a big boost in popularity.

In June, when Easterling showed herself dancing with Kardashian to a tune about "besties," the TikTok got 20 million more views than the ones on either side of it, which just featured her dancing by herself.

Similarly, Easterling has tagged Kardashian in Instagram photos taken at her house, to give everyone scrolling the knowledge of exactly who she's hanging out with. And Kardashian has frequently posted pictures with Easterling on her own Instagram account, which has triple the following.

The first time Kardashian posted Easterling's face on her Instagram account, both of them were posing in Kim Kardashian's KKW Beauty cosmetics line's nude lipstick and lip liner. We know this because Kardashian listed the exact shades in the Instagram caption — a not-so-low-key product placement for some, but pretty standard for the family in question.

Since then, the pair have taken several sexy pool pictures together, some shots of them engaging in fine dining, and most recently they appeared to be each other's date to the virtual VMAs, where they posed in Miley Cyrus' "Midnight Sky" trailer full of disco balls. For what it's worth, despite having far fewer followers, Easterling's matching post got more than twice the likes that Kardashian's did.

It's not out of character for the eldest Kardashian sister (41) to hang out with younger people like Rae (19). Kendall Jenner called Kourtney "rude" just last year for "trying to be cool" around the 24-year-old supermodel's friends.

A Year in @skims! I always feel super confident and comfortable in my @skims, I’m so excited to be part of their 1 Year Anniversary campaign. Photographed by @vbuntitled 🤎 #ad

If the lipstick Instagram advert wasn't enough, Easterling has now officially become the face of Kim Kardashian's other major venture: women's shapewear, through her company SKIMS. So far, Easterling has just been the main player in a singular ad campaign, but one year ago, Easterling wasn't even famous.

Easterling has yet to post a picture of herself with Kim, but considering this is her second endorsement of the woman, it's only a matter of time. The Kardashians have taken this young social media talent under their collective wing, and given Easterling's already meteoric rise, it's a sure bet she'll flourish.

The Weeknd's "King Of The Fall" Returns to Streaming Services