Home » Music » Two of Us: The friends behind the red centre’s only heavy metal music festival

Pirate (at left), 35, and Joe Nobleza, 34, met at high school and bonded over heavy metal music and a shared rebellious streak. Today, they are "respectable" people with full-time jobs – but their arty angst is rarely far from the surface. 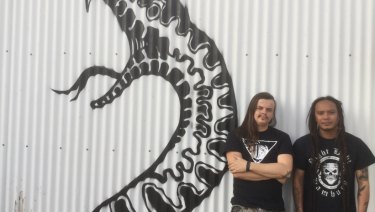 I think of Pirate as my brother. We disagree on things but always work through them. Credit:Helen Chryssides

JOE: Pirate can walk into a bar and people will take one look at him and turn their noses up. He's been wearing those ripped pants for, like, 16 years or somethin' and, with his hair, he doesn't look like your average guy. But by the end of the night, they'll be hugging Pirate and thinking he's awesome. That's because he's genuine, true to himself and confident.

We knew each other at Centralian Senior College in Alice Springs but weren't friends. Then one night, when I was about 17, I was leaving a party and Pirate was driving past and gave me a lift. We got into some classic underage drinking and have been mates since.

We found we had common interests: partying and heavy metal music. Metal is an outlet, especially when you're a teenager. You feel frustrated and don't really know what to do with your life, or you have problems at home.

Pirate works at Alice Springs Correctional Centre as a multimedia trainer, but music is his thing. I'm now the bass player in his band, Snakes. Pirate is driven and passionate about The Black Wreath, his record label, venue and touring company, and the Blacken Open Air music festival, which we co-founded with others. He gets people to feel the same passion.

The Black Wreath started as a collective of three bands that loved metal but didn't have an outlet. We decided to join forces and combine our resources and connections, instead of trying to outdo each other.

Then Pirate got the only heavy metal festival in the centre of Australia going, Blacken the Globe, in 2013. Now it's called Blacken Open Air. This Easter, we had about 30 bands from all over Australia play. The festival has given young people something to look forward to. You hear people whinge and bang on here, saying there's nothing to do. But if you put your mind to it, you can achieve what you want. We couldn't pull that festival off anywhere else in Australia, with the amount of people that attend and the volunteers. That's all thanks to Pirate.

Pirate has some irritating habits. When he rings, he can keep you on the phone for ages without achieving anything. And if you accidentally get trapped in the car with him, something that should take 20 minutes ends up taking, like, three hours. He's always got to see someone about something. You can't take him anywhere because he knows too many people. When we landed in Bali on a tour, a guy yelled out "Pirate!" before we even went through customs.

I think of him as my brother. We disagree on things but always work through them. Like putting the stage together at The Black Wreath headquarters. I did most of the work because I'm the carpenter. We used awesome recycled timber. Once I was done, Pirate said, "Should we put carpet over it?"

PIRATE: Joe is Mr Favour. He just can't say "No" and is always helping people. I'm concerned he'll burn himself out. He's a great carpenter and a solid bass player. When we went on tour to Bali, our original bass player pulled out at the last moment and Joe stepped up and learnt all the material in a few days.

I moved to Alice Springs from Melbourne when I was about six; my dad worked at Pine Gap. Alice was a strange, quite rough place to grow up, with social problems, violence everywhere, and heaps of racists and bigots.

I first met Joe at art class in high school where we were both doing really dark stuff. He was drawing aliens and skulls and I had depictions of foetuses and weird surrealist characters. I was full of teenage angst and really angry. Joe and I were rebellious arty types – outcasts, really – and into heavy metal. So we started hanging out, listening to loud music.

I liked breaking things: household items like DVD players. Some sort of anti-materialistic philosophy, I guess. I also loved the sound of things breaking. We'd hang out in a room at a friend's place that we called The Germ – because it was so messy – covering it in graffiti from floor to roof, smashing stuff, and throwing each other into the walls. We've outgrown all this and are now respectable people with full-time jobs. But it's still a cathartic hobby of ours, and at the festival in 2016 we got the crowd to smash up a couch after our set. You're pumped up on adrenaline with the audience in a frenzy.

I come up with ideas but don't have the skills to see those things through. So I'll call Joe and he'll say, "That's a big f…ing job." And I'll say, "Yes, that's why I called you." He's super-skilled and is Blacken's site manager, putting in the stage and all the infrastructure.

He's more keen on drinking on Thursday nights and I prefer Fridays. His rationale is that, if he gets drunk, he can struggle through Friday and feel fresh for the weekend.

I didn't pick the name Pirate. People started calling me that when I was the singer in a band called Angry Pirate and used to drink a lot of rum. I'd ring someone and say it was Nick and they'd go, "Who?" And I'd go, "Okay, it's Pirate!"

The happiest I've seen Joe is at the opening of The Black Wreath in November 2011. We had four bands smashing it out to a room full of people. It's a soundproof venue and studio and Joe built the bar and stage. He couldn't stop grinning because we'd both been building it for 10 months. Another time we were in Berlin, visiting all these dedicated metal clubs. We never had that growing up in Alice, just hotels and little sporting clubs. That's why we decided to build our own here and today young people can come to concerts and get involved.

I've dedicated my life to metal. This is the most exciting and high-energy extreme outlet for me. The best thing about Alice is the close-knit community. There's always people willing to support you. We lift each other up that way.

To read more from Good Weekend magazine, visit our page at The Sydney Morning Herald, The Age and Brisbane Times.