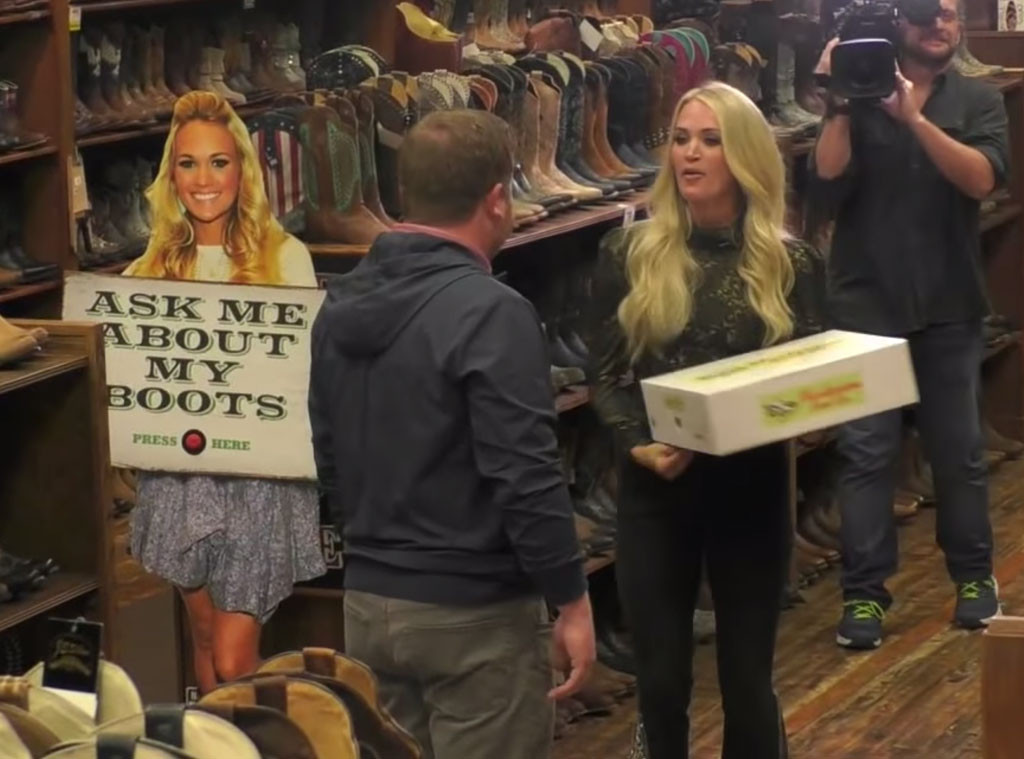 Maybe next time she’ll think before she pranks!

Carrie Underwood fans got a treat on Tuesday night’s Jimmy Kimmel Live when the “Cry Pretty” singer went incognito for the show’s “Undercover Sing” segment. After setting up hidden cameras in a Nashville boot shop, Carrie—set to host the 2019 CMA Awards on Thursday—waited in the back to surprise customers with a serenade.

Singing to the tune of her hit “Before He Cheats,” Carrie kicked things off when three customers began scanning the aisles of cowboy boots. “Right now, we got three ladies who wanna buy some cute boots to go line dancing,” she sang over the loud speaker. “Right now, one lady has purple hair. She’s the punk rock one, gonna get some boots now.”

The ladies quickly caught on to the prank. “These girls are coming from Virginia,” Carrie continued before going to the floor to meet the shoppers. “Virginia is for lovers, lovers of boots. This lady is laughing because she knows that I’m singing ’bout her and her boots.”

Next up was John, a friendly shopper that really wanted some boots. “John is holding onto his shoes,” she sang. “If he doesn’t get boots, he’ll have the blues. Take it from me, Carrie Underwood.”

Taking things up a notch, Carrie then asked John to do a dance. “If you do a dance for me,” she began. “You’re gonna get those cowboy boots for free. So start moving and shake your derrière.”

But alas John’s simple booty shake wasn’t enough for the Grammy winner. “Dance again and don’t you stop,” Carrie belted out. “In your cute blue sweater top. I promise those boots will be on me.”

And that’s just the beginning.

Watch Carrie prank the shoppers in the hilarious video above!

How Kacey Musgraves Followed Her Arrow to Become a Music Superstar