Home » Music » Why the Cadillac Three Are Nashville's Most Uncompromising Band

The Cadillac Three’s Jaren Johnston has his arms above his head like he’s in the middle of a tricep extension at the gym, except he’s gripping a small axe instead of a dumbbell, staring down a target with laser focus. Johnston, alongside his bandmates Neil Mason and Kelby Ray, are gathered this Tuesday morning at an East Nashville axe-throwing establishment (yes, that’s a thing), and Chelsea, the resident hurling-sharp-things-against-the-wall expert, is coaching Johnston through his first official chuck. He smirks at Mason, who is his assigned competition, and lets the thing fly. “Let ‘er rip,” Chelsea says.

The axe misses the target by about a foot and hits the wall with a peculiar sort of thump. Johnston looks back at Ray, waiting for his turn while sipping a pre-noon beer, and shrugs. “Must be something with the axe,” he says, retrieving the fallen weapon and getting ready to swing again, rubbing his hands together for a minute to warm his palms. Chelsea evaluates his form, which looks solid. “You just have to let go,” she says, “and follow through.”

And with that, he takes a swing and slices the axe right into the target. Let go and follow through — that’s advice to which Johnston can relate. To make it as a band for 15 years without a hit single or a sound that conforms easily to a particular genre (the Cadillac Three are just as much country as they are hard rock), you need that certain balance of fortitude, consistency, and surrender. You let go of some dreams (for TC3, that’s a hit single on country radio), but you follow through anyway, all the way to a fourth record.

It’s the week before the release of the Cadillac Three’s new album, Country Fuzz, and we’ve chosen to throw axes on this particular morning because it feels suitably on brand. “It’s country and it’s fuzzy,” Johnston says. “It’s a big-ass country thing to do, throw axes at wood.” None of the band members have ever tried this specific pursuit before, but they are fairly serious about pool, to the point where Ray and Johnston once carried their own personal cues, and they get down with plenty of pre-show ping-pong.

But being here at an axe-throwing hall in the middle of East Nashville, around the corner from an apartment where Johnston lived as a “poor kid from Inglewood,” tells more of the story of the Cadillac Three than any activity designed for tourists and bachelor parties in search of an adrenaline boost.

“This used to be the garage for the auto college next door,” Johnston says, though it’s nearly unrecognizable now. All three members of the band were born and raised in Nashville and went to local public schools (save for Johnston’s stint at a religious one, of which he was kicked out for fighting too much). “That, across the street, was the shitty gas station where you could get killed, and we used to go to the daycare at the church before the Walmart came,” Johnston says after passing the axe to Ray and returning to his beer. His Western-inspired sweater, which he thinks “looks like something Kevin Costner would wear in Dances With Wolves” is slung over the chair next to him. “Now it’s just bars, up and down.”

Unlike many of their peers — including some colleagues they’ve written songs for or with — the Cadillac Three have developed more like a hungry rock band than as an aspiring country singer, one who rolls into Music City with little live experience under his belt and is eager to subscribe to the formula for radio success. Instead, under the names American Bang, the Cadillac Black, and finally the Cadillac Three, they made playing live a priority, taking gigs around Nashville every chance they could.

“That was our whole thing when we got started,” says Mason, rounding up his bandmates to take a break from hurling axes. “We just slapped posters literally anywhere you could find a wall. That was just always our mentality.” They were just as country and just as fuzzy then as they are now, straddling the same line between mainstream Music Row — Johnston and Mason could easily rest on their songwriting careers alone, scoring hits for Jake Owen and Frankie Ballard, among others — and scrappy rock & roll. 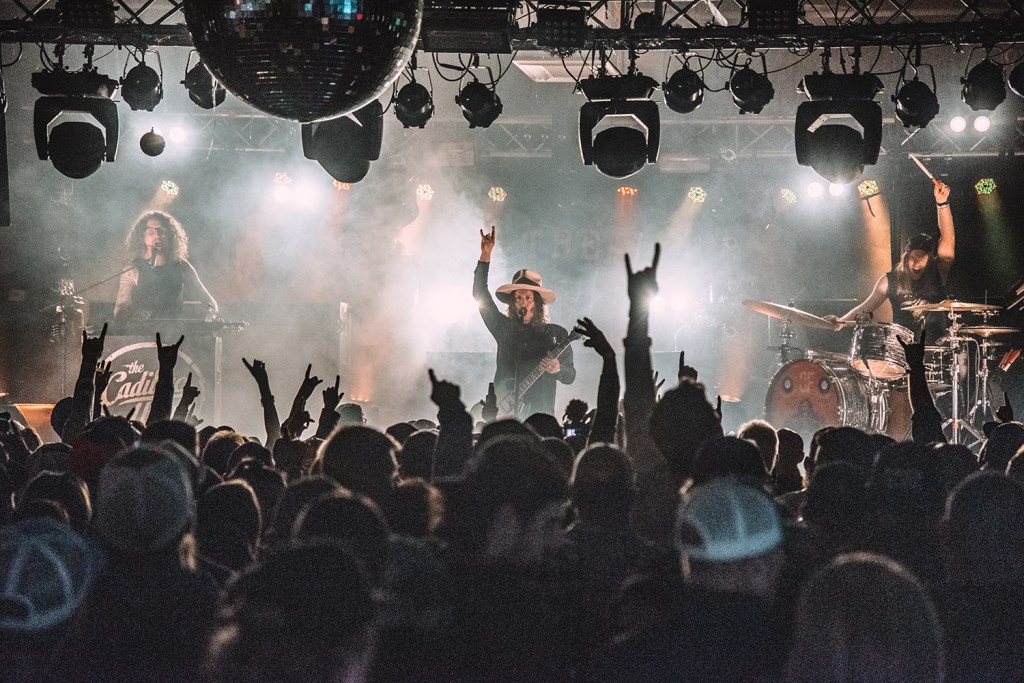 Country radio, it seems, considers the band to be too much of the latter. Their debut single “The South,” which featured country-radio bros Florida Georgia Line and Dierks Bentley, and the beautiful dashboard ballad “White Lightning” were both criminally overlooked, despite becoming two of their most popular songs with fans. As born and raised Nashvillians, the lure of a hit song is intriguing to the group (Johnston has promised to buy them all Cadillacs if it ever happens), but not enough to make them sacrifice their identity. If anything, on Country Fuzz, they double down on who they are, coming out with 16 Southern rock tracks that get funkier, louder, and even a little prog. They lean as deeply as ever into being hard-to-define country music, and have even debuted a Country Fuzz merch line, from which they’re all wearing a little gear today.

The curious thing about the Cadillac Three is that, in concert, songs like “White Lightning” do sound like hit singles — the trio’s dedicated fanbase yell the words back to them in a huge, collective chorus. With their second show at Nashville’s Ryman Auditorium coming up in March and consistent sold-out tours abroad (“There are rednecks everywhere,” quips Mason), they are building something sustainable by focusing not on the ephemeral boost of a Number One, but on communing with their fans.

“I feel bad for artists who are in this town and it’s the only thing they have,” says Johnston of acts who achieve fleeting radio success. “They get a hit or a Top 10, but they can’t sell out their hometown because it happened so fast. It can ruin careers. Those artists get thrown into the game really quickly and they never recover once they have the hit everyone wants and the label is happy. In a sense, I’m really glad ‘The South’ died at [Number] 32, because it made us want to fight harder.”

Like their friend Kip Moore, the Cadillac Three are building their empire with hard tickets, not by spins, and cementing their legacy with consistency and not self-indulgent experimentation. “We want to be a band you want to be in,” says Johnston. “We just so happen to get to be in it ourselves.”

Mason nods. “There is a big difference between having a Number One, and having a Number One where people connect to who you are,” he says. “Some artists, the Number One happens and the fan base carries over. Other times, the radio only embraces the song. In our case, we’ve had to go out and do it in a way where we are winning over each person, one at a time.”

Country Fuzz doesn’t sound like it’s trying to be intentionally or mischievously against the grain, but it does feel like it was made explicitly for their fans. Put simply, this is an album that doesn’t chase trends. They splice in some White Zombie on “Slow Rollin’,” a little Seventies funk on “The Jam,” and crank out their signature swamp on “Back Home.” The only song they didn’t have a hand in writing on the album, “Back Home” could actually score some airplay — more likely, though, if it were sung by some clean-cut any-bro with a good-Georgia-boy twang, and Mason’s Ralph Molina-inspired playing was replaced by digestible canned drums.

But the Cadillac Three, who took two and a half years to make the self-produced Country Fuzz, aren’t about to make any such concessions.

“It’s every bit of dirt you could put on something — and get away with,” says Johnston, before picking the axe back up and letting it fly. This time, it hits its mark.

How Taylor Swift Helped Selena Gomez Get Over Justin Bieber

What Are Some of V's Favorite Songs? Here Are Music Recommendations From the BTS Member