At the age of 92, Frederick Wiseman, the creator of long documentaries, has made a short fiction feature. This begs the question of whether his “A Couple” marks a break from a style established over nearly 60 years, or whether it is a continuation in every way, bar genre technicalities. Wiseman is known for his unobtrusive long takes, naturalistic observations, meticulous focus, and gentle humanism. Faith and patience is required of the viewer as he uses a method comparable to mosaic-building to, piece by piece, assemble a bigger picture of people, places, or institutions.

“’A Couple’ follows a long-term relationship between a man and a woman,” reads the film’s logline. This concept is distilled down into episodes of monologue assembled from diary entries by Sophia Tolstoy, wife of the legendary Russian novelist Leo Tolstoy. Their relationship is entirely constructed through her eyes, with his part in things conveyed through the impression he has left on her soul. This asymmetry feels fitting and even righteous, considering that — until now — history has only heard from him.

Although the two films are formally world apart, there are thematic comparisons to be made here with Björn L. Runge’s “The Wife”: There is a special kind of neglect reserved for the wives of “great men,” argue both films. Sophia quotes her husband, saying, “A true artist puts the best of his life unto his work. This is why his work is beautiful and his life is pathetic.” How it feels to be the prime collateral damage of a life deemed “pathetic” is the objective of Wiseman’s portraiture here and, by the end, he has created a devastating and essential rendering of this exact scenario.

Words are the principal story building blocks here, and not just any words, that distinctly ornate and soulful mode of eloquence that defines 19th century Russian literature. It is clear what attracted Leo to Sophia so that they married when she was 18 and he was 34. “A Couple” unfolds at a point in their relationship arc when over 30 years have elapsed since their marriage and they now have children. Sophia (Nathalie Boutefeu) is wandering around an idyllic and lonely garden that is the French island Belle-Île off the coast of Brittany.

Wiseman opens with a shot of waves rushing over black rocks, rolling backwards and then crashing into white spray. Eventually, he introduces a solitary figure in a black-fringed shawl adorned with bright flowers. Then he returns to establishing shots of trees, blossoms, and flowers. Wiseman is meticulous, even in miniature. What would be B-roll to someone else is the material to him.

The intention is to thoroughly convey that Sophia is sequestered in a paradise lost. She is privileged to be in sumptuous settings at the same time as she is atrophying in isolation. To have spacious grounds is a great luxury, but given too much of it, people lose themselves. When Wiseman shoots Boutefeu within a wide shot amidst nature, she is just part of the scenery, a mass of mobile color, like the bright pink rhododendrons or the white lilies. For contrast, he also shoots her trying to write letters against a roughly-hewn stone wall lit by a lantern at night. Here she is in close-up, her careworn face attempting to express what has been happening to her in this marriage. 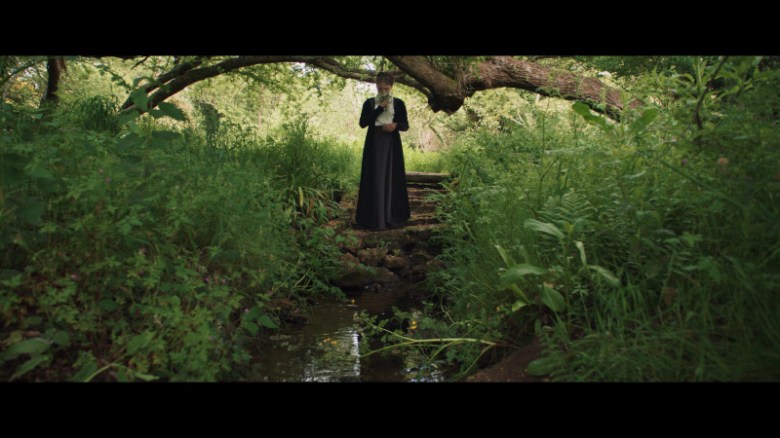 “Your power has crushed my life and my personality as well,” she says. Still, she remains passionately in love with her husband, even if she dares not express it directly to him any longer. Boutefeu is credited as the writer of “A Couple” and it is Boutefeu who brought Sophia’s diaries to Wiseman after the pair worked together on the Emily Dickinson play “The Belle of Amherst.” She has sculpted the raw material of the diaries into an arc that works to peel back the emotional layers of the marriage. The dramatic stakes here are the question of: What did Leo do when he plucked a bright 18-year-old from her life and put her in the gilded cage labeled a “Great Man’s Wife.”

“A Couple” is Wiseman working to bottle a human soul. His customary forensic treatment is in evidence, even over the course of just 64 minutes, through what he chooses not to show. Leo is the mold that set the clay of the woman we see before us. Her extreme youth and inexperience at the point of their marriage reverberates through 54-year-old Boutefeu’s use of a guileless, little girl voice. She was almost a child bride, and this information invites us to guess why Leo chose her. What did he want from her? Perhaps her impressionability was the draw, perhaps it was her love of letter-writing.

It is a testament to the seamless knitting together of the diaries that the extent of Sophia’s identity crisis is slow to emerge. The range of her feelings for him leave us in doubt as to the riches of her soul; however, it is only gradually that a picture of a mercurial marriage emerges from her passions and confusions and laments. Long timelines are elegantly compressed in a way that makes them sensible, even in recollection. There is a tragic power to her clarity around his slowburn neglect. He ignores their children too. Decades of disillusionment come to the fore in dense poetic language, and Wiseman holds them amidst naturalistic footage of the garden, like foie gras on a bed of lettuce.

There is Ophelia-esque imagery as she stands beside a moss green stream, exploring options that include suicidal ideation. The dream there is to leave him to take responsibility for the life he propagated beyond the page. “I reproached you for ignoring our children,” she says. The only out she can imagine now is self-immolation, at least in fantasy. The reality is too much to bear and yet she bears it sufficiently to articulate it. “I mustn’t show you I love you as before. That would be humiliating,” she says, asking “Should the pleasure of sacrifice be stronger than the pleasure of living?”

To answer the opening question as to whether this is a departure or a continuation for Wiseman: It is a continuation. “Un Couple” is pure-grade empathy for a woman defined by her proximity to a man whose legacy is safe as far as the eye can see. Wiseman has made a vocation out of filming what is right in front of him, and he applies that schematic to a dead woman whose words are all that remain. Her husband did not see her, but we will.

“A Couple” premiered at the 2022 Venice International Film Festival and opens at New York’s Film Forum in November.

Spoilers: Sharon faces terrible guilt as she has Sam killed in Corrie?