On Tuesday’s episode of The Bachelorette, Clare Crawley admitted to suitor Chasen Nick that she felt “invisible” in high school and never attended prom.

“I never went to prom, nobody ever asked me!’ she shared. “Nobody even knew who I was in high school.”

However, shortly after the episode aired, one viewer took to social media to call BS on Clare’s claim, sharing photos of her husband attending a formal high school dance with the Bachelorette herself.

My husband took @clarecrawley to senior prom, @clarecrawley you went to prom. #bachelorette #clarecrawley #senior ball #1999 #hothusband Note: she went to all girls school he went to a all boys school call it want you want, Senior Ball or Senior Prom, it took place in the spring.

Clare fired back at the claims after a commenter tagged her saying, “@clarecrawley you’ve been exposed.”

“Lol actually not,” Clare wrote. “You do know there is more dances in high school that are NOT prom? Turns out it’s just someone digging up old photos. (why she keeps her husband’s old dance pics I’m not sure) I went to a new school senior year and in fact DID NOT go to prom just like I said. 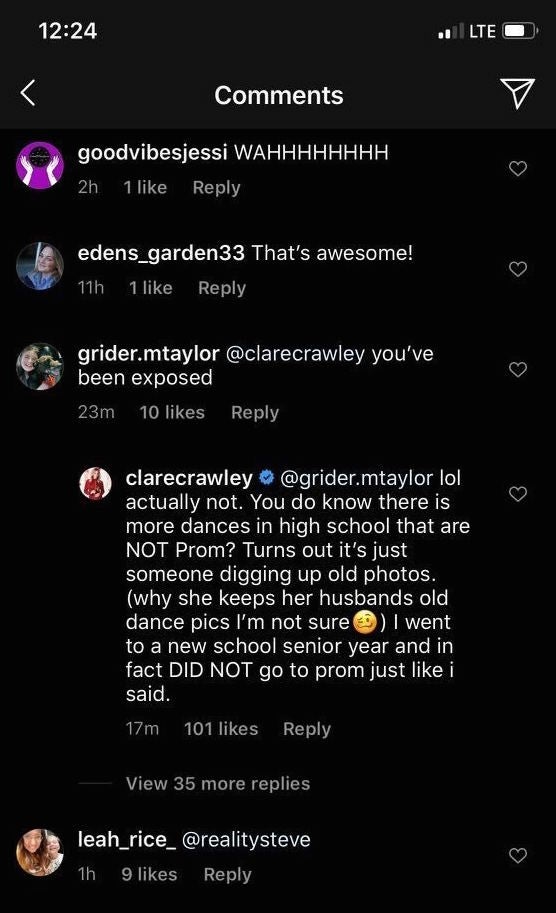 The viewer later added to her caption to clarify, “Note: she went to all girls school he went to a all boys school call it want you want, Senior Ball or Senior Prom, it took place in the spring.”

If promos for the upcoming Bachelorette episodes are any indication, the prom controversy won’t be the only drama headed Clare’s way this season. In upcoming episodes, the hairstylist’s instant, “electric” connection with suitor Dale Moss appears to be called into question by Clare’s other contestants — who wonder if the two were in contact before filming began.

Clare was in a unique situation this season, due to the coronavirus production shutdown. Her suitors were announced just before filming was set to begin, but then the cast and crew was sent home in the early days of the pandemic, allowing Clare and the men to have internet and phone access once again.

Harrison told ET that Clare did look up some of her contestants online — some of whom were later recast — but she insisted, both on the show and to ET, that the only suitor she had been in contact with prior to filming was Blake Moynes, whom she praised on the premiere for taking the risk to reach out to her when her mother was hospitalized.

“Blake was the only person that messaged me, the only person I had any contact, talked to, any sort of communication with [ahead of the season],” Clare told ET. “We’re given these rules to respect, the process of it all, and I definitely, 100 percent, respected the process. What he did, and the reason he did that, I also really respect.”

Clare and Blake even shared the first kiss of the season, but her heart certainly seems to be with Dale — who of course received the coveted First Impression Rose. However, when speaking with ET last week, Clare played coy on her current relationship status, saying only, “I’m very happy.” She wouldn’t share whether or not she was currently engaged or in love, but did say, “I mean, I feel like there’s so much more to it.”

In a recent interview with ET, Harrison admitted that allowing a Bachelor or Bachelorette the chance to research or contact their potential suitors ahead of filming might become a part of upcoming seasons.

“[Clare] admitted to me that she started looking through and getting an idea of what these guys stood for who they were — not a terrible idea, and maybe that’s something we incorporate into the future of this show,'” he noted.

The Bachelorette airs Tuesdays at 8 p.m. ET/PT on ABC. See more from Clare in the video below.

Celebrity Hunted 2019 – when does it start and who are the contestants? – The Sun