A review of “The End of the World,” this week’s Big Little Lies, coming up just as soon as I hire a child psychologist who dresses up as Little Bo Peep…

The title “The End of the World” most literally refers to Renata and Gordon‘s daughter Amabella‘s panic attack in the wake of lessons in second grade about climate change, sustainability, and what kind of planet she and the other kids might inherit from their parents. But the episode is packed with glimpses of the adults’ emotional worlds falling apart, even as the kids are understandably more focused on the physical state of things.

Renata and Gordon continue to reel and argue over his arrest and the ensuing blow to their fortune. Their daughter’s panic attack isn’t exactly a welcome distraction, but it gives them something else to yell about for a while instead of Gordon’s expensive toys. It’s no fun for Warren — who bitterly refers to all the second-grade moms as “Shakespearean” after Renata chews out him and Mr. Perkins for the climate change lessons — but for the Kleins, at least their anger gets to briefly be directed outwards. Still, Gordon notes that Renata was angry and distant long before this current financial calamity. He doesn’t know what really happened on the night Perry died, but his assessment of the change in Renata and how it’s affected Amabella feels unnervingly correct. 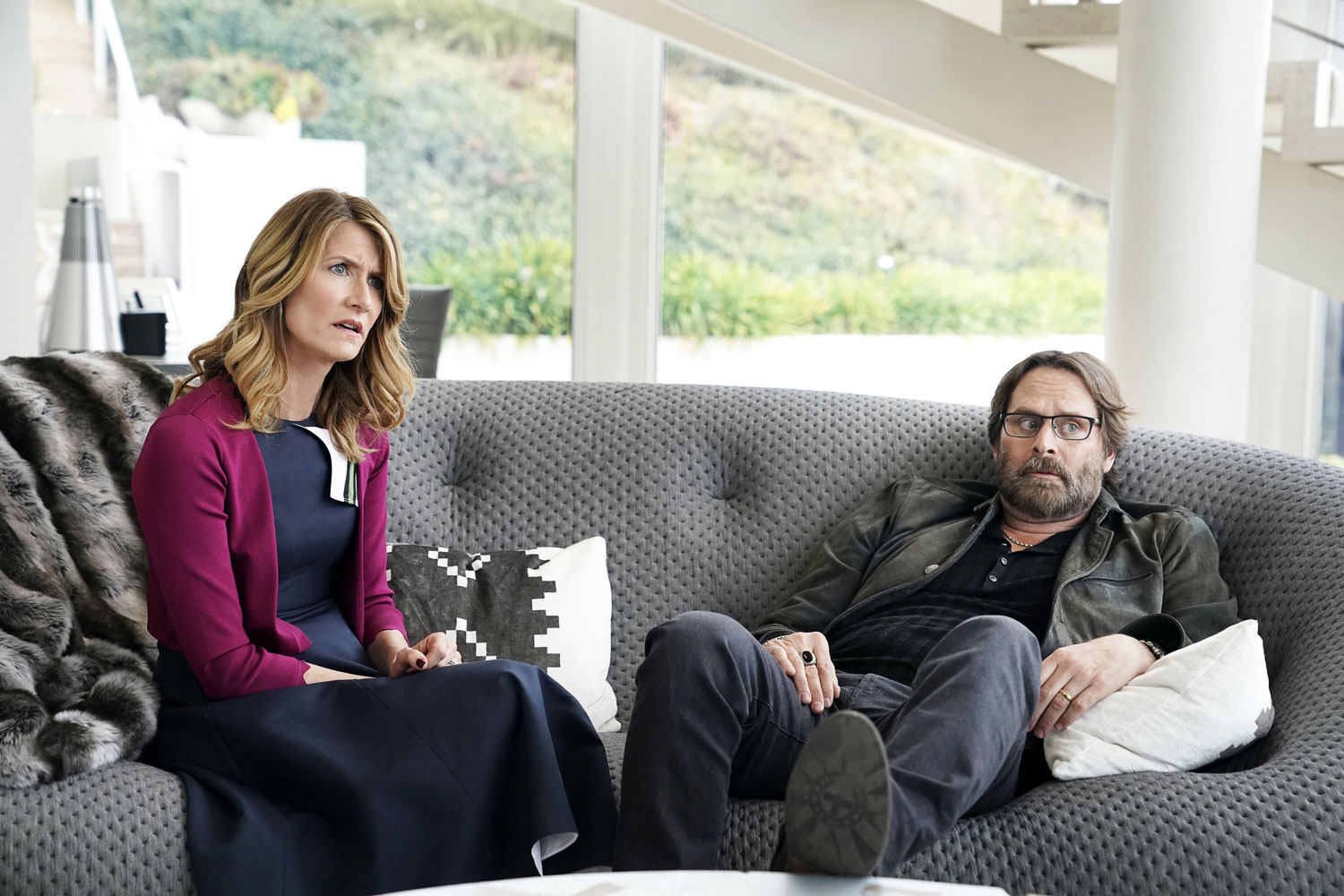 Perry’s ghost continues to haunt most of the women. Bonnie is spending too much time staring at the ocean (even by Big Little Lies standards). Jane enjoys a nice date with Corey, but she shuts down when he tries to kiss her, apologizing afterwards but not explaining that she has PTSD from her sexual assault. Mary Louise softens towards Jane after seeing the obvious physical resemblance between her late son and Ziggy, but she remains Perry’s number one cheerleader, relentlessly prodding Jane to say nice things about him even after hearing a graphic description of the rape. (It’s Mary Louise’s soft-spoken maternal quality that makes the moment so horrible to watch. We see when she deals with Madeline and others that she can be just as abrasive as the second-grade moms. But here, she thinks she’s acting kindly even as it’s unbearably cruel for Jane to have to listen to this PR campaign on behalf of her attacker.)

Mary Louise isn’t the only one trying to cling to Perry’s good qualities. Celeste laments how colorless life feels without her abusive husband, and in a particularly confrontational session with Dr. Reisman, she argues that she was a better mother with him around. Reisman tries to steer Celeste into thinking of herself as a combat veteran — “You miss the war, Celeste!” — but in the episode’s unnerving final scene, we see Celeste masturbating to a video message Perry once sent her from a business trip. The show never shies away from this emotionally fraught aspect of their marriage. On the one hand, Perry was a violent abuser. On the other, violence was a component of their sex life that both spouses enjoyed. Celeste hated many of the things Perry did to her, but she can’t — especially now that he’s no longer there to hit her — hate the totality of him. She still has an emotional and sexual attachment to him. These feelings aren’t healthy, but they are real.

Reisman also winds up performing couples counseling for Madeline and Ed (*), and wounds both spouses with her understanding of things they can’t admit to themselves let alone to a stranger like her. To Ed’s surprise, she’s not willing to cast blame entirely at the feet of his cheating wife, noting the blurry line between being easygoing and being emotionally checked out of his own marriage. And she’s able to extrapolate from the college imbroglio with Abigail that Madeline has a lower opinion of herself than might appear obvious to the outside world. Still, even a scripted therapist with Lt. Columbo’s gift for understanding the foibles of the rich and powerful can only make it so far in an opening session. It’s not until Madeline is talking with Celeste later that we get to another root cause of the affair: that as a girl, Madeline walked in on her father having sex with his mistress and was sworn to secrecy by him. She was taught how to tell big lies when she was too little to shoulder such a burden.

(*) Is this a reward to Robin Weigert for turning a bit part into one of Season One’s most indelible performances? Or just an efficient bit of storytelling, since of course Celeste would recommend Reisman to her best friend, and we know from her early sessions with Celeste and Perry that Reisman treats both couples and individuals? Either way, more Weigert is always a good thing, here and anywhere else on TV.

And though Madeline was less connected to Perry and his death than Celeste or Jane or Bonnie, she’s the one who has the episode’s most spectacular meltdown. At an impromptu school assembly to discuss the kids’ anxieties — and the parents’ complaints about the climate change lessons — Warren passive-aggressively invites Madeline to address the room, “because you’re a beacon among us.” What is meant as an indulgence of the pushiest parent instead leads to a public self-immolation. Madeline, racked with pain about the affair, the way Ed seems to be reveling in his ability to be cruel to her, the situation with Abigail, and the obvious pain that her friends are in over Perry, launches into a monologue about the evils of the world and how grown-ups lie to children about them. “Most endings to most stories fucking suck,” she admits. “Let’s just get real. There aren’t a lot of happy endings for a lot of people.” Soon, she’s tearfully unpacking the lyrics to “The Rainbow Connection,” pointing out that the most beloved Muppets song of them all is actually a lot less saccharine than it seems, as it asks questions like, “Who said that every wish would be heard and answered?” (In a nice touch, she doesn’t get the words exactly right. Knowing her daughters’ musical tastes, she likely hasn’t heard it in a long time.)

As Madeline unravels, she briefly sees Ed as the only person in the auditorium, and the expression on his face is not a kind one. She is pleading with everyone to share the whole truth with their kids. But we see throughout the episode that the whole truth doesn’t sit well with adults. Mary Louise and Celeste are both reluctant to consider it about Perry. Jane is worried (despite Bonnie’s encouragement) about how Corey will view her if he knows it about her. Renata is closing herself off from her husband and daughter. And Madeline has seen what happened when Ed got a fuller picture of the woman he’s married to.

To paraphrase our pal Kermit, they’ve heard it too many times to ignore it: There’s something they’re all supposed to be. But they’re not. And the thing that connects them isn’t a rainbow, but something much darker.