[Editor’s Note: The following review contains spoilers for “Big Little Lies” Season 2, Episode 7, “I Want to Know,” including the ending of the Season 2 finale.]

When HBO ran the preview for the “Big Little Lies” Season 2 finale, there was a juicy little line at the start: “The lie is the friendship.” In that context-free clip, it sounded like Celeste was implying the friendship itself is a lie, but midway through Episode 7, when she says it to Madeline while trying to assuage her guilt, the line indicates these friendships were built on the lie, for better or worse; that this makeshift group of friends only really exists because they lied to cover up manslaughter.

This sort of switcheroo happens all the time — trailers tease a troubling scenario to build up anticipation, and then the final product isn’t quite what you expect — but the telling point about this pivotal moment, which sets up the group turning themselves in as the season comes to a close, is David E. Kelley’s fundamental misunderstanding of Season 1’s ending. It wasn’t the lie that brought them together; it was fighting back against Perry — it was defending each other from the many bad men of the world, instead of fighting those battles solo. The friendship isn’t a lie, nor is it built on a lie. The lie was a mistake — a mistake forced in to allow Season 2 to happen — but the friendship is built on survival, loyalty, and sheer human decency.

Of course, that doesn’t fit into Season 2’s story — where the group has to be fractured in order to come back together again — so of course it’s simply jettisoned instead of reworked, reckoned with, or otherwise acknowledged. Ultimately, the contentious follow-up season offered plenty of spectacle, but it couldn’t deliver a cohesive story with believable, compelling development. Even the courtroom scenes seemed ridiculous, ripped from another series and smacked onto this one because how else could a mother and her mother-in-law throw down? Much of the finale — well, most of Season 2 — is built around sounding smart instead of conveying emotional intelligence and building characters who are allowed to carry it, shifting “Big Little Lies” from a savvy, well-told mystery into a story that refuses to acknowledge the answers it already provided.

Just look to the characters and where they ended up. No, not jail, but before that. Madeline (Reese Witherspoon) gets to renew her vows and keep her family well before she agrees to fess up to the murder. How we’re supposed to be happy for Ed (Adam Scott) when he re-proposes to his wife while she’s still lying to him in that very moment is incomprehensible. Their re-coupling only works if Madeline tells him what’s going on with her, and she wasn’t prepared to do that. She just wanted him back, well, because she wanted him back. 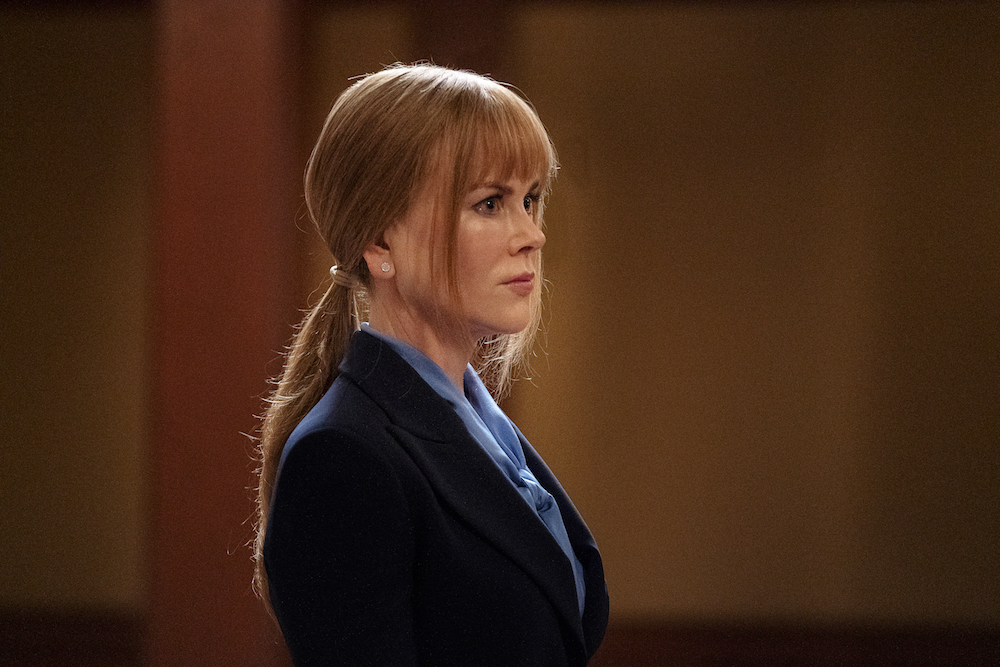 Jane (Shailene Woodley) gets back together with the guy her son oh-so-creepily says she should be with, and Iain Armitage stressing that “be” will haunt me for a lifetime. That Jane is able to overcome her trauma and find happiness in a physical, romantic relationship is great, but it’s far from a massive, well-earned arc. Nor is there really anything to her dude, who’s name I already forget and won’t be bothered to Google — he does not matter, which is fine since Jane does matter, but there have to be more compelling ways to explore her healing process.

Celeste (Nicole Kidman) gets to keep her kids. That’s it. Yes, she deletes the videos of Perry, so she, too, can be seen as moving forward post-trauma, but these are little baby steps compared to the self-destructive tendencies she was coping with before. There’s nothing in the episode that reckons with the implication that her sons still see violence as a viable option, or that they may turn into their father. That door feels purposefully left open for a potential Season 3 — as does Mary Louise leaving Monterey, while remaining on pretty good terms with her remaining family.

Renata (Laura Dern) dumping her husband is an episode overdue, and her bashing his train sets was an inevitability since they were first shown. But Dern is so good it just works. Look at her Starbucks scene with Mary Louise, and listen to her rework the writerly word “wrought” into a weapon — in anyone else’s hands, it would’ve sounded ridiculous, but Dern has been able to instill Renata with so much rage it’s impossible not to sit back and enjoy her unleash it. Sure, it’s predictable, and obviously she would’ve walked out on Gordon (Jeffrey Nordling) last week after the nanny incident. But let’s watch her bash some trains. Why not? (Bonus points to Meryl Streep, who’s also working overtime to make bad writing sound interesting, for picking up Renata’s Starbucks order. So funny, and such a Mary Louise move.) 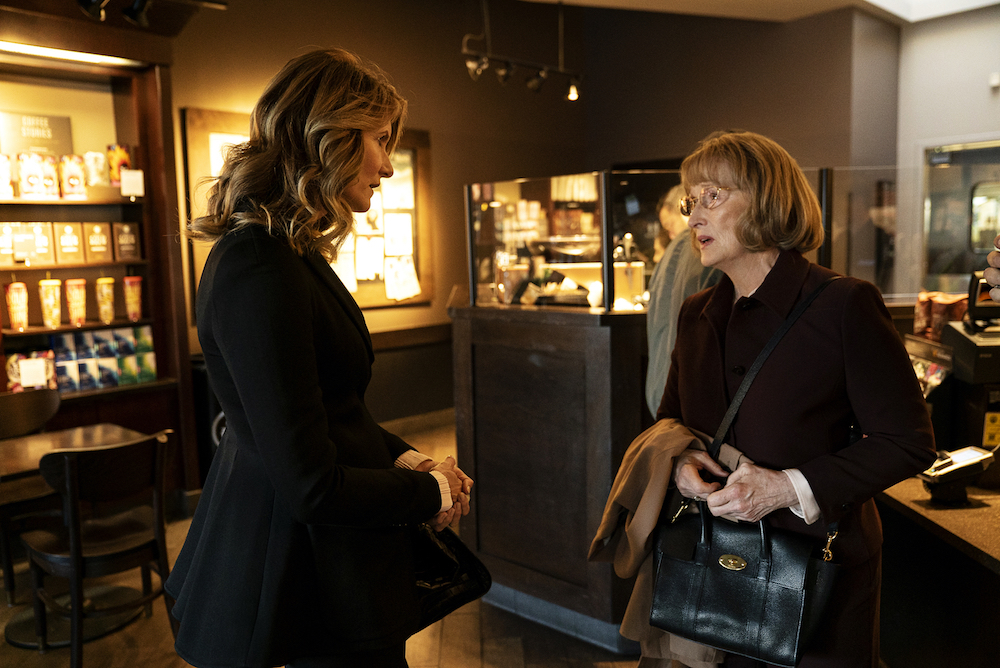 Finally, we come back to Bonnie. After spending six episodes using dreams to fake-out the audience — She killed her mother! …no, she didn’t. She confessed to the murder! …nope, another fantasy — the finale gave us two more misdirects. First, she didn’t kill her mother… again. When she picked up that pillow, it was so she could sleep next to her mom, not smother her, and then later on, when she says she finally has to tell Nathan something, she doesn’t confess to the murder, she says she never loved him. Honestly, Bonnie could have said about 10 different things in that moment, and they all would have been as believable as what she did say. That’s how little we actually got to know her this season, despite watching her go on long walks and talk about “the lie” over and over again.

When the group meets at the police station and marches in together, it’s meant to be seen as their only option. After a season of torturous melodrama (for them — it was pretty fun for us), the lie is eating them up, and they have to make it right. One might be able to argue they’re telling the truth to set a better example for their children, or even that they deserve to be punished, if not through sheer karma — as almost happened with Madeline losing Ed — than by the one true power in this world: the law. (Remember: David E. Kelley wrote this.) But those loose lessons have to sought out by the audience. The series does little to justify them, instead leaving their ultimate fate open-ended, probably in the hopes of getting renewed for Season 3.

If that happens, people will watch. This group of actresses is so talented that they can make even the most dunderheaded scripts entertaining. Perhaps they can even steer things back in the right direction, delivering a season where we don’t spend seven episodes watching women get punished for doing the right thing. But that seems unlikely given the actors aren’t the problem with Season 2 — the man (or men) shaping the episodes, misunderstanding the message, and generally contorting everything to fit his outdated vision was the problem. For all those flashbacks to Perry’s death, shown over and over to kick off each new episode, not once did there appear to be another option. He was strangling his wife, and hurting her friends. Bonnie had to push him. That’s the truth. Their friendship isn’t a lie, and it’s not built on one either. So why are we pretending it was?

“Big Little Lies” is now available to stream in its entirety on HBO Now. Season 3 has not yet been renewed.

Rick and Morty season 4, episode 5 promo: What will happen in Battlestar Ricklactica?