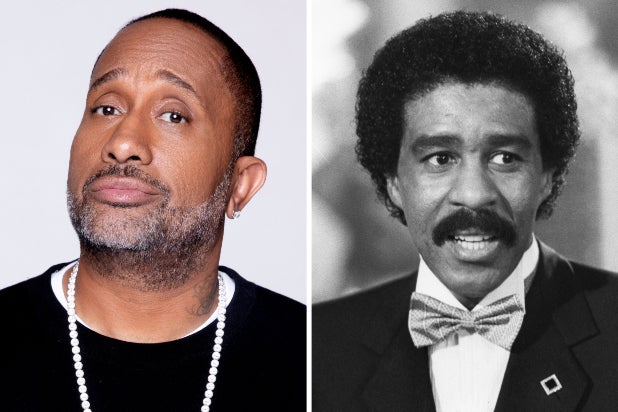 Kenya Barris will write, product and direct a biopic about legendary comedian Richard Pryor at MGM, the studio announced on Monday.

The film lands at MGM following a competitive bidding war with multiple studios involved. Jennifer Lee Pryor and her Tarnished Angel and Tory Metzger for Levantine Films will produce alongside Barris and his Khalabo Ink Society. Adam Rosenberg will serve as executive producer.

“The way Pryor did what he did — with truth and specificity that was somehow self-aware and self-deprecating, and said with an unmatched level of vulnerability – that was the power and impact of his work,” Barris said. “Pryor had a voice that was distinctly his and, in many ways, comedy since then has been derivative of what he created. To me, this is a film about that voice, the journey that shaped it, and what it took for it to come to be.”

Pryor added: “Having had a front row seat to much of Richard’s life, I am excited that the mystery of his genius is finally going to be explored and Kenya Barris is the perfect person to do it. Richard and Kenya are creative brothers.”

Pryor was the first ever recipient of the prestigious annual Mark Twain Humor Prize, and he has been celebrated in the world for his live comedy. He appeared in almost 50 movies, headlined the series “The Richard Pryor Show” and “Pryor’s Place,” and wrote for shows including “Sanford and San,” “The Flip Wilson Show” and two Lily Tomlin specials — one of which earned him both an Emmy and a WGA Award. Pryor’s first screenwriting credit was “Blazing Saddles,” which earned him the WGA Award. His stand-up was chronicled in four films, and he has earned two platinum albums, five golds and five Grammys.

MGM Film Group Chairman Michael De Luca and MGM Film Group President Pamela Abdy added, “The NY Times has said of Richard Pryor, he was an ‘iconoclastic standup comedian who transcended barriers of race and brought a biting, irreverent humor into America’s living rooms, movie houses, clubs and concert halls.’ We couldn’t agree more. Along with our partners Kenya, Tory, Jennifer and Adam, we are incredibly excited to share Richard’s extraordinary life with audiences the world over.”

Barris, best known for creating the show “Black-ish” and “Grown-ish” and recently writing the screenplays for “The Witches” and “Coming 2 America,” is represented by CAA, Artists First and attorney Gregg Gellman. Pryor and Levantine are represented by Hogan Lovells.

'The Mandalorian' Delivers Its Best Episode Yet With "The Prisoner"