Cannes 2021: Plus, “Cow” director Andrea Arnold hints at “Big Little Lies” experience, and “After Yang” could be a highlight 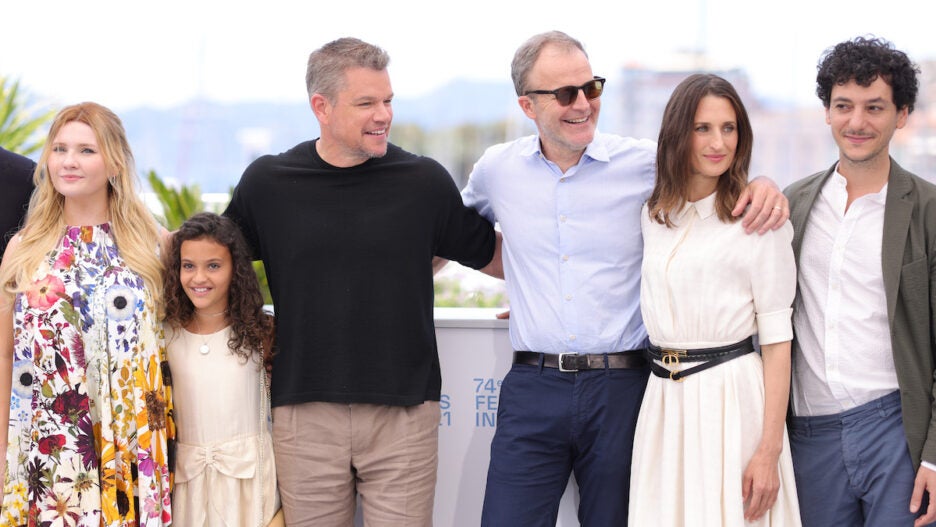 Matt Damon teared up during the lengthy standing ovation for his new film “Stillwater” following the movie’s Cannes premiere, and on Friday he got honest about why he cried in the moment, and why he chose to play a character who “of course” supported Donald Trump.

“He is who he is and he’s from where he’s from, and the movie has a lot of empathy for him, and so do we,” Damon said during Friday’s press conference. “These guys don’t apologize for who they are or what they believe. ‘Do you have a gun? Yeah, I’ve got two.’”

Damon’s character in “Stillwater” is an Oklahoma roughneck who travels to France and goes to great, dangerous lengths to rescue his daughter from a French prison. At one point he’s asked by his French companions whether he voted for Trump, and he says that he didn’t, but only because he was a felon in prison.

But Damon and “Stillwater” director Tom McCarthy explained they spent a good chunk of time in Oklahoma meeting with the “roughnecks” of the film who spend hours driving from oil rig to oil rig and back home. He got to know why they wear certain flame-retardant jeans over others and how that makes you walk. He explained every detail of understanding their culture was essential to getting the character right.

“We got so much guidance from the actual guys,” Damon said. “It’s a culturally very specific place, and a very different place from where he and I grew up. So these people were wonderful to us, and really helped us. I didn’t know when I first read the script how specific this culture was in Texas and Oklahoma.”

But Damon also took time to praise his co-stars, describing that after the first scene he shot with actress Lilou Siauvand, he realized she was the “Meryl Streep of 9-year-olds.”“She gave something different on every take, which takes decades to learn, but somehow she knows that intuitively,” he said.

As to why he finally teared up, he said he’s been to Cannes many times before, but the reality of returning to Cannes during the COVID-19 pandemic was unlike anything he had experienced before.

“We’re all forever changed by this year. It’s a very inhumane reality that we were asked to live in. That lack of human connection is a very inhumane, it’s not how we’re supposed to live. It’s scary and anxiety inducing,” he said. “All of these things, we’re not meant to be cut off from each other.”

Andrea Arnold’s documentary “Cow” won some high praise from critics following Thursday’s premiere, with some writing that it gives an empathetic portrait of animals that’s greater than anything you might see from a Disney cartoon, and it even features a sex scene that might be better than anything people hyped about Adam Driver and Marion Cotillard in “Annette.”

You can see some other reaction to “Cow” below. But she hinted at her experience directing the second season of “Big Little Lies,” saying that the eight years it took her to make “Cow” overlapped with shooting on the HBO series.

Arnold also danced carefully around the 2019 reports that “Big Little Lies” was re-cut without her knowledge, something that she has not spoken about and that the network has pushed back on. And though she declined to comment much beyond saying, “I learned a great deal,” she did reveal that she worked with five different editors on the show. And though she wished that she could have worked on “Cow” in the evenings after finishing the day on “Big Little Lies,” she was frequently exhausted.

“After Yang” Could Be a Highlight of the Festival

Making its premiere Thursday in the Un Certain Regard section is the second film from director American director Kogonada, his follow-up to the indie drama “Columbus.” That film has a lot of ardent supporters, so anticipation was high for those who are in the know. And it certainly got off to an auspicious start, with one of the film’s stars Jodie Turner-Smith showing up to the premiere in a ravishing ball gown complete with a massive train.

“After Yang” though is not quite a journey through rural Indiana but a sci-fi that earned some comparisons to Alex Garland’s “Ex Machina.” Collider said it’s the best film about A.I. in years, and Little White Lies said it’s “an expansive yet intimate portrait of grief and identity, and cements its writer/director as one of the most exciting new voices in cinema.”

See some of the other online reaction to the film below:

'Captain Marvel 2': Why Angelina Jolie Could Direct the Perfect Sequel