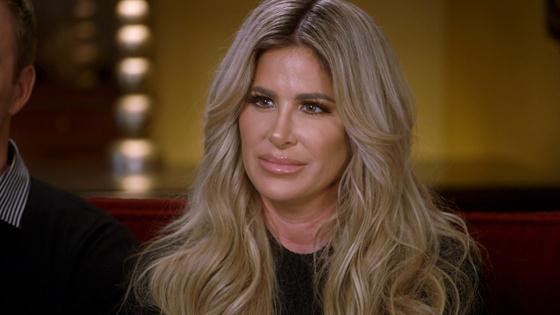 Andy Cohen likes to say Bravo’s Real Housewives franchise is like the mob. Even when a reality star leaves the cast, she’s still part of the family…and will likely return in some capacity.

At the first-ever BravoCon, Jill Zarin, Adrienne Maloof, Kim Richards, Caroline Manzo, Kim Zolciak-Biermann and Jeana Keough, original cast members from The Real Housewives of New York City, New Jersey, Orange County, Atlanta and Beverly Hills, assembled to discuss their time on the show and life since. Aside from Caroline, all have made return appearances in some capacity on the shows they once called home. What would it take to get them back permanently? Their answers? Pretty varied.

JILL ZARIN
Jill starred in seasons one-four of The Real Housewives of New York City and appeared in a guest capacity in seasons nine, 10 and 11. She revealed she did film for the upcoming season 12.

“I don’t think there’s anything,” Jill told E! News when asked what it would take for her to return full-time. “You know, it’s not a money thing, it’s not a Bravo thing, it’s not a cast thing. It’s just…the time has moved on. It’s not time anymore. I’m still friends with all the girls, so it makes sense for me to come back on when…it makes sense, and it made sense in this particular situation because something happened, it was the right time and moment, and then that was it. I don’t need anymore. They certainly don’t need any help on the show.”

CAROLINE MANZO
Caroline starred in seasons one-five of The Real Housewives of New Jersey and her own spinoff Manzo’d With Children for three seasons. She has not returned to RHONJ, but did confirm she had discussions about returning for the recently debuted season 10 until she decided against pursuing it.

“I don’t know. It would take a lot of thought and conversation and a Brink’s truck, so we’ll see,” Caroline laughed.

JEANA KEOUGH
Jeana appeared in the first five seasons of The Real Housewives of Orange County as a main cast member. In season six, she was a friend, then a guest in seasons seven, 10, 11 and 12. But she still has connections to the various women on the show.

“They just call me. That’s all it takes,” she said when asked what it would take for her to pick up an orange and be a full-time Housewives cast member again. “I think I’m just a little boring, you know? I’m a little boring.”

KIM ZOLCIAK-BIERMANN
Kim was part of the main cast for the first five seasons of The Real Housewives of Atlanta. She returned as a guest star in season nine and in a “friend” capacity in season 10. She also got her own spinoff, Don’t’ Be Tardy…, which is in its eighth season. So, what about a return to RHOA?

(E! and Bravo are both part of the NBCUniversal family.)