Cash in the Attic: Family surprised by record-breaking final profit

Cash in the Attic guests Vic and Janet will be left speechless in Monday’s episode of the Channel 5 show when they receive a whopping profit for a haul of rare 100-year-old bank notes. The couple were hoping to take their family on holiday but had no idea their rare collection would fetch a record-breaking amount.

Retired builder Vic came across the 1916-1918 banknotes when he was renovating a two-bedroom house 30 years ago.

He discovered a series of nine original white bank notes from over 100 years ago.

The Bristol-issued £10 and £5 notes are so rare, that the two experts are stumped when it comes to estimating their value.

Vic remarks: “I have been dying to know a little bit about these notes. I was a builder and bought a house in Beaminster. 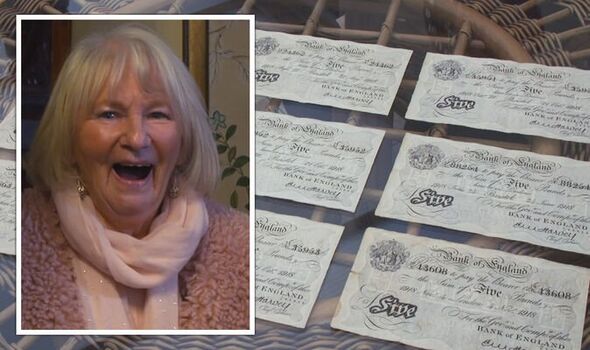 “And we were doing it up and I happened to walk beneath the stairs and there was a hole and I pulled this tin out (containing the notes). It was thirty-two years ago.”

The Cash in the Attic experts reveals eight of the notes were issued in the local mint in Bristol and one in London.

He says:  “To find one Bank of England white £5 note is unusual, to find this many, and the £10 note it’s unheard of.

Cash in the Attic: Valuator shocked by collection of old bank notes

“I’ve never come across this before. It’s absolutely incredible.”

Cash in the Attic veteran Paul Hayes is asked how excited he is at the lot and says: “On a scale of 1-10, it’s 11. I have never seen nine Bank of England white notes in the same place at the same time.”

The married couple discovers at auction that one buyer, in particular, is determined to get their hands on the rare notes.

The first note sells for a staggering £8,000 and each of the notes sells for a four-figure sum.

Meanwhile, the three £5 notes with consecutive serial numbers sell for £16,000 as one lot.

The President of the International Bank Notes Society purchases the entire collection.

Janet had originally signed up for the show with the hopes of securing £3,000 to take 11 family members on holiday.

The couple are told they have made a record-breaking profit of £51,489.