Warning: This post contains spoilers from Episodes 6 and 7 of Cobra Kai Season 5.

John Kreese may be behind bars, but that doesn’t mean he’s been silenced. Not by a longshot.

In Episode 6 of Cobra Kai‘s fifth season, the jail-bound sensei continued working whatever angles he could from the inside. While maintaining his connection with his “granddaughter” Tory (who’s been working as his mole inside the dojo), Kreese had an open line to what’s been happening on the outside, helping him influence the conflict between the dojos. But when he attempted to manipulate the prison system by “playing the good soldier,” his prison-assigned psychologist didn’t buy it, thwarting his hopes for a positive recommendation and early release.

In another therapy session, Kreese cycled through repressed memories as he appeared to be speaking directly to his lost love Betsy, young Johnny, Terry Silver and even Captain Turner. Then after confronting his lingering anger and raw emotions, Kreese went back to his cell and finally let loose on his jail mates. “You don’t know me very well,” he told them before delivering a hefty karate beatdown to everyone who’d underestimated him and stolen his Jell-O. (Hey, that matters when you’re behind bars!)

Below, TVLine talks to Martin Kove to break down the Kreese-centric episode, including his relationship with secret agent Tory, feelings toward former student Johnny and why a major loss from his past still haunts him.

TVLINE | With Kreese stuck in jail, how is he going to figure into the conflict with Terry Silver?
MARTIN KOVE | He’s got information from his mole, who is a loyal soul, and he’s putting it all together. He has to get his revenge because he’s been violated so deeply by Daniel and Johnny. But they come in second. The major violation is what Terry Silver is trying to do. There’s no integrity there. It’s just commercialism. He’s creating fast food and that is not what Cobra Kai was about 35 years ago when they were in Vietnam. It’s almost the same principle when Miguel got hurt. Johnny violated the code of Cobra Kai, that mercy is for the weak, and Miguel showed mercy. He ended up losing and getting hurt. From Kreese’s point of view, Johnny violated the integrity of Cobra Kai. 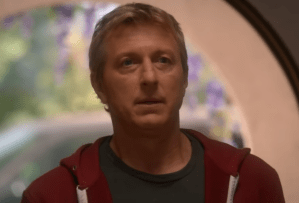 There are only two things that [Kreese] really loves: He loves Cobra Kai and he loves Johnny Lawrence. Johnny violated that element of Cobra Kai, so Kreese at the end of Season 3 had to take over. It wasn’t his plan from the beginning. He just wanted to share in the success of the All Valley Tournament. He was very happy being an assistant. It’s the same thing with Terry Silver. Terry will get his for violating what we all care so much about: survival and Cobra Kai.

TVLINE | Kreese is still in very close contact with Tory. Can you tell me a bit about what bonds these two together?
Tory had the same problem with her parents, and grew up the same way he did. He sees that as an adult. When he visits her and sees exactly what’s going on and how she’s protecting her mother and taking jobs, he identifies with that because his father was an alcoholic, and his mother was very similar to her mother, incapacitated from almost a voluntary standpoint. And honestly, when Kreese first saw Tory, he didn’t think she was much of a martial artist. Then as things evolved, she’s become this wonderful martial artist and terrific athlete, as you see in all of these episodes. (These kids don’t get a lot of time to perfect their work and they all look terrific.)

And the way [the writers] leaned her into being sympathetic and respectful of John Kreese is wonderful. This show is written with a lot of perception and they conceive everything a year and a half before the season even begins. When I signed on, I wanted him to be more vulnerable and emotionally conscious, with lots of texture and colors. And they’ve done that as the seasons have gone on, and especially this season. People all over say, “You know, we used to think John Kreese was a villain, but now we really feel sorry for him.” That’s what I’m shooting for as an actor. 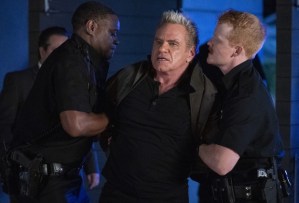 TVLINE | In Episode 6, we see Kreese imagining his lost love Betsy. How much of that loss still weighs on him?
I create a lot of backstory whenever I’m doing a show. When you create a backstory and you reread it and then the camera’s rolling, you know why and when and how these things affect you as a human being. Not just affect the character, but the actor. So it was a catharsis for me. I loved that scene. It’s my favorite scene. [Co-creator/co-showrunner] Hayden Schlossberg said, “It’s the best acting I’ve ever seen you do. It’s Emmy material.” I like the high-level emotion, contrary to what I’m popular for. I’m popular for being cold and steely and tough, but that’s not what I’m about.

What happened with [the] Betsy [storyline]: John Kreese stays in your body no matter what anybody says. Some [actors] keep [characters] in their souls forever, some keep them in their souls for a few months and they can shake it. Kreese came up in my relationship with my lady, and when I was making those scenes, I was pulling on the unhappiness I had with my relationship, and all of that — especially Betsy — was real to me. And so I was able to cry and all that because I was pulling on stuff that was happening to me in real life at that given moment. It was all personal and I love the fact that the writers could write that way. The success of any TV series is the writing, and our guys stayed right with the quality of work from Season 1. That’s what turns an actor on. That’s why everybody wants to stay working on this show. 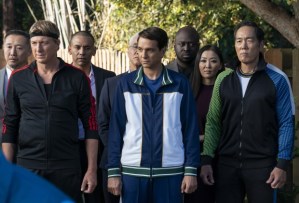 TVLINE | Johnny and Daniel wind up getting some info out of Kreese — that Silver’s plan involves the Sekai Taikai tournament — but they ultimately dupe him. Is Kreese going to be out for revenge or is there any chance these three might end up on the same page one day?
I think both. I think the revenge game is first and foremost with Terry Silver, to get Cobra Kai back on track. [The dojo’s] supposed to have exclusivity. It’s going to be open season on Silver, and John Kreese will get his revenge. [However,] I don’t think he could ever hurt Johnny, and unfortunately, Johnny has been hurt enough by the image he put Kreese in as his father-figure, and then of course, all the things that have gone down in the last four or five years.

TVLINE | What does it mean to you to still be a part of this clearly thriving franchise?
As an actor, it makes me feel very fortunate to be a part of it. I’m dying to see the maturation of it. I’m dying to see how all of this concludes. It’s got to be so creative and so interesting because when this show came out, people were afraid that if they watched Cobra Kai, “Oh, my God, it’s a take off on Karate Kid. They’re going to mess it up! It’s not going to be that dream movie I loved so much in 1984.” People were afraid of that. It’s like a religion, you know? These cats write really well and as long as we keep the writing up, and Billy [Zabka], Ralph [Macchio] and I stay alive, you’ll have the legacy built-in.