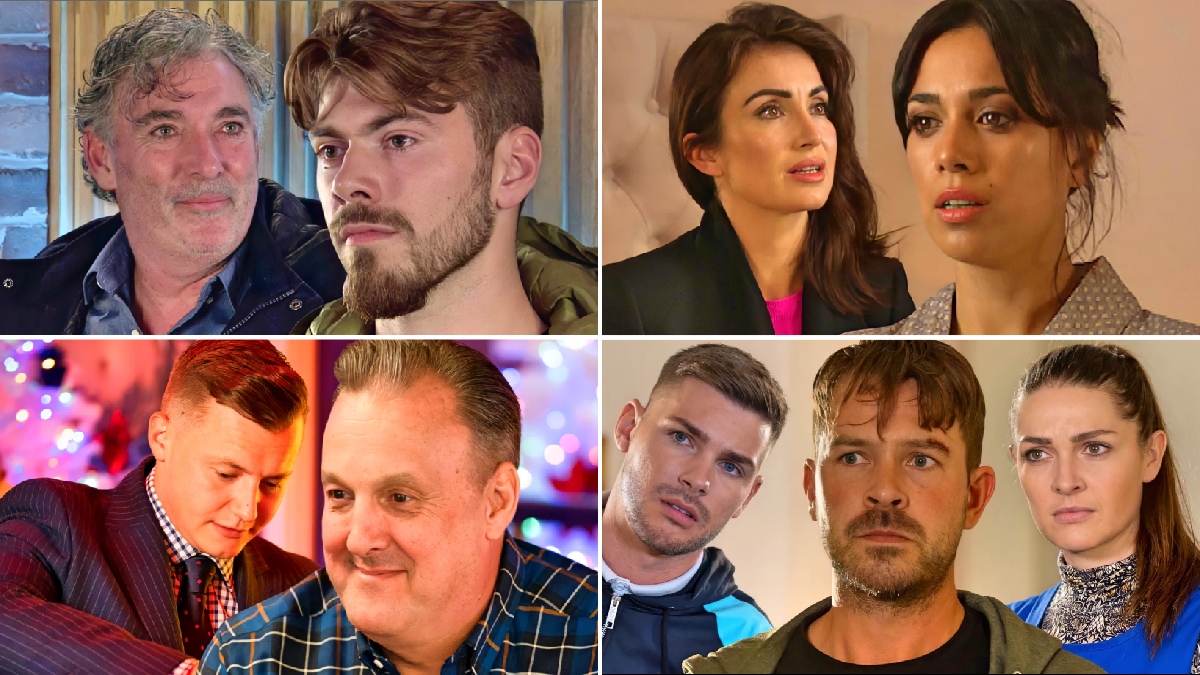 Huge revelations and big decisions are made in the soaps next week.

Curtis Delamere’s world is rocked in Coronation Street by the arrival of his dad Neville, who Emma Brooker thought was dead! Awks.

Priya Kotecha, meanwhile, decides to face her fears with some help from Leyla Harding in Emmerdale, as she looks at her back for the first time.

Aaron Monroe cruelly spikes dad Harvey’s drink in EastEnders ahead of his date with Jean Slater, while Darren Osborne is on the brink of being rescued in Hollyoaks, after several familiar faces end up in the hotel in which he’s being held against his will.

Christmas is approaching, but the nights are anything but silent in the land of soap, and if you’d like a little taster of what’s to come, then keep reading!

Curtis wants a small wedding, explaining that his mates and family are abroad. Emma, however, plots to track down his family and invite them. Curtis gets wind of her plan, and he’s not happy! He takes a trip to the hospital, telling Emma the consultant is confident his condition can be managed, but he gets a shock when Neville, his dad, arrives on the cobbles! The very same Neville who he claimed was dead.

Ryan discovers what Zeedan is up to at the restaurant, and he soon tells Alya, who rails at her brother for destroying their business. Elaine reveals she wants to sell her share in Speed Daal, forcing Zeedan to suggest they up their game and pitch the food van at the Christmas market if they’re to buy her out. But the food van vanishes – with Hashim’s dirty cash inside! Hashim, furious, tells Zeedan to burn the restaurant down and claim on the insurance. The restaurant is subsequently engulfed in flames – and someone is inside. But who?

Daniel’s attempts to wind Daisy up backfire when he leaves her hurt. They subsequently row, and Daisy ends their relationship, before proceeding to go out with footballer Ashley. Summer, meanwhile, gives herself a makeover to look like Daisy, but Daniel fails to notice. After school, Daniel offers Summer a lift home, but Max films their exchange on his camera.

Priya’s anxieties about her body come to the fore, as she goes through her wardrobe. She tells Leyla she still hasn’t looked at her back, and Leyla gently encourages her to confront her fears. Priya and Leyla are shocked into silence by the sight of the scars on Priya’s back. Afterwards, Priya stands silently staring at her reflection in the mirror.

Dawn leans in for a kiss with Billy, which he initially reciprocates before pulling away. Mortified, Dawn dodges Billy in the aftermath of their kiss, but Billy tracks her down, insisting she listen to what he’s got to say. He explains that he wants to be with her, but wants assurance from her that she feels the same after their messy past.

Belle plots to reunite Tracy and Nate. Nate begs Tracy for another chance, and while she appreciates his efforts, she’s not sure. Before long, Frankie utters her first word, ‘Dada’. Nate is overjoyed but Tracy’s mood shifts as her old doubts about her parenting resurface.

Aaron slips some vodka into Harvey’s beer, encouraging him to drink up. Mila eventually realises what’a going on and stops serving Aaron, as Harvey gets drunker by the minute. Jean arrives – but what will transpire?

Nancy and Peter ask the Stuart and Rainie to take part in a transformation programme at the gym, before and after shots included. Rainie encourages Stuart but a bitter Peter pretends to offer the last spot elsewhere, but Rainie catches him out. At the gym for his photoshoot, Stuart panics when Peter tells him to take is top off and runs out.

Denise gives Kim some happy news: Pearl’s been offered a scholarship! But is all as it seems? Jack doesn’t reckon so. Kathy puts her foot in it with Kim, who then opens up to Jack and he encourages her to look to the future. She visits the scrapyard to find some closure and sees Howie. She pleads with him to talk to the police and Howie admits he was threatened not to talk – and when he gives a description Kim realises it’s none other than Phil!

Sienna and Ste enlist Leela’s help for their first big cleaning job, which just so happens to be at the very same hotel where Darren is being kept prisoner! Luke, meanwhile, decides to search for his missing friend, and thus accompanies Sienna and Ste. Will they cross paths with Darren?

Misbah is shocked to find out about the new ‘evidence’ in her case against Ali, and feels a sense of relief that Ali felt guilt towards what he did, but her hopes of a trial are shattered when she finds out the evidence was forged. Will the Maaliks come clean?

The McQueens are hit with another blow when Tony has a devastating announcement: they’re getting kicked out before Christmas!