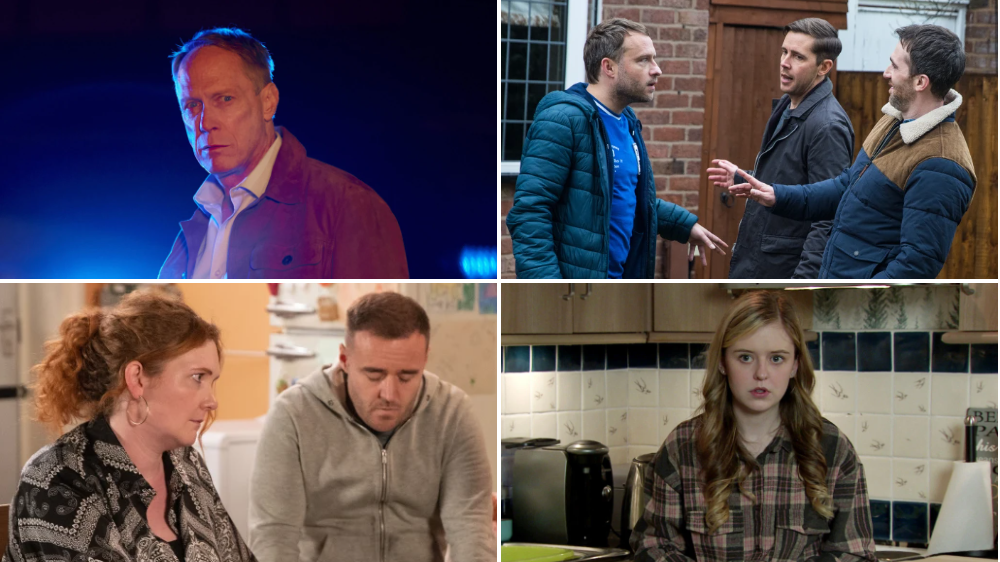 It’s long been accepted that Coronation Street is a dangerous place to live, but next week violence is everywhere, with three characters potentially set to die.

Stephen Reid (Todd Boyce) is a man on the edge, and when Teddy finally discovers the truth about what happened to Leo.

Sealing himself as another Corrie multi-murderer, Stephen kills him; but will he be caught this time?

Summer Spellman (Harriet Bibby) is also in a serious situation when she collapses while being held hostage by unstable Mike.

But the tables turn when Mike himself is left to die on his doorstep after a beating from Paul Foreman (Peter Ash).

No matter where you look next week, death is all around. Here’s what you can expect, in our day by day guide.

Aaron and Billy are worried that they can’t get hold of Summer. Aaron heads over to Mike’s house but Mike says Summer has gone shopping with Esther. Aaron leaves but is suspicious.

Mike finally unlocks the nursery door, but he’s horrified to find Summer unconscious. Suddenly Esther arrives and demands to know what on earth’s going on.

Esther calls an ambulance while Mike spins her a tale about Summer trying to back out of the surrogacy plan and how he detained her in the hope he could change her mind.

In the hospital Aggie overhears Mike giving a false name for Summer and she contacts Billy. Billy and Paul arrive and demand some answers.

Sam finds Hope in the café listening to her John Stape cassette. Hope explains that by hearing her Dad’s voice, she hopes to get to know him better.

She is devastated when back at home the tape unspools. Tyrone manages to sort it out but when he presses play he and Fiz are horrified as John Stape’s voice fills the room.

Sam explains how Hope listens to the tape of her Dad in a bid to get to know him. How will they react?

Leanne’s furious when Jacob fails to show up for work. Guilty Nick keeps his counsel.

When Amy reveals that Jacob has gone and they broke up because he’s drug dealing again, Leanne’s furious whilst Simon reckons Amy’s had a lucky escape.

When Carla finds out from Leanne and Simon that Jacob is drug-dealing again, she’s surprised and dismayed in equal measure.

When Stephen finds Rita struggling with some bags for the charity shop, he offers to take them in Audrey’s car for her.

Rita’s grateful whilst Jenny’s impressed at his kindness. At No.1, Daniel takes delivery of another bunch of flowers and glancing at the card, demands Daisy tell him who Justin might be. Daisy messages Justin the DJ and tells him to leave her alone once and for all.

Billy, Paul and Aaron are furious when the police officer tells them that Mike and Esther have accused Summer of lying about being pregnant in order to extort money from them in exchange for the baby.

Todd and Paul are horrified to find Mike at Summer’s bedside. As Mike hurries out and angry Paul goes after him. As Mike approaches his front door, he finds himself confronted with Paul and Todd.

Paul sees red and shoves him hard. Mike falls, hitting his head on a plant pot. Todd and Paul stare at his motionless body, horrified. Has Paul killed Mike?

In the Rovers Stephen confides in Gail that he’s worried Elaine might be reading too much into their friendship. Teddy overhears and parks himself at Stephen and Elaine’s table.

Elaine’s miffed at the intrusion, but Stephen’s secretly grateful. With Elaine gone, Teddy explains to Stephen that he overheard his conversation with Gail and thought he’d come to his rescue.

Stephen’s grateful and offers to get the drinks in but panics when Teddy suddenly remembers something about the accident.

Damon suggests to Nick and Leanne they should all come up with some new ideas to improve business.  Leanne’s won over whilst Nick’s wary.

When Ryan reveals that according to his mate in Ibiza, Damon is a known drug dealer and once put a rival club owner in hospital, Nick’s worried sick.

Nick confronts Damon and asserts that he won’t allow drugs in the bistro. Damon spells out that he’s no choice unless he wants Leanne to find out where the money came from.

As Daisy and Daniel draw up a list of wedding guests, Daisy reveals that all her friends are fellow influencers as she’s lost touch with her childhood friends.

Daniel vows to secretly track down her old friends and invite them to the wedding. Jenny reckons it’s a lovely idea. But will Daisy feel the same?

Fiz and Tyrone decide that it would be good for the girls to have a pet to look after. Tyrone and the girls return from the pet shop with Cilla the chinchilla. Fiz is unimpressed.

Fiz and Tyrone watch as Hope bonds with Cilla the chinchilla, optimistic that it could be a new beginning as she’s clearly smitten with her new pet.

In the Rovers, Elaine confides in Tim how she leant Stephen £12k and since then he’s cooled towards her. Jenny’s ears prick up whilst Tim’s horrified. In the café, Stephen Teddy agrees to abandon his trip and Stephen is relieved.

But when Billy says something to Teddy it triggers a memory and as Stephen heads out of the factory, Teddy approaches and revealing that he now remembers everything, accuses Stephen of having done something to Leo.

Teddy grows angry, revealing that he remembers every word of their conversation before the accident. Stephen leads Teddy into the factory, suggesting they can talk inside.

In the factory office, Teddy accuses Stephen of doing everything he can to stop him going to Canada because in truth he killed Leo in a bid to have Jenny for himself.

When Teddy vows to report him to the police, Stephen whacks him over the head. Stephen has killed again…

When a delivery man calls in with another bouquet for Daisy from Justin, her heart sinks and she puts a post on social media warning other women about the DJ.

When an angry DJ Teativo calls at the Rovers and demands Daisy take down her damaging post, Daisy’s horrified to discover she targeted the wrong person and has no idea who Justin is.

Michael calls at No.5 and handing Gemma £60, asks her to mind Glory for the day.

As Gemma shoves the cash in her wedding fund tin, she can’t believe her luck and decides she is going to offer BSL-friendly childminding services.

Fiz and Tyrone return home hoping for an afternoon lie down, but the mood is broken when they discover the house smells of chinchilla poo.

Where's the $15 Billion Congress Approved to Save Entertainment Venues?