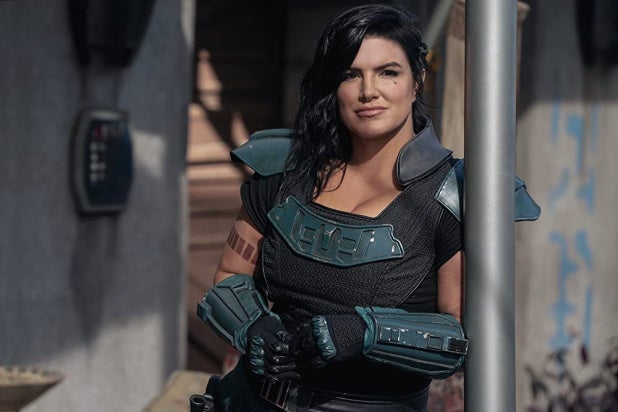 He added during the investor call that the company stands for universal values and that, “we seek to have not only how we operate, but the content we make, reflect the rich diversity of the world we live in.”

Carano was dropped from “The Mandalorian” after the actress posted comments Lucasfilm said it considers “abhorrent” on her social media.

The former MMA fighter played Cara Dune on the series for the first two seasons of the hit Disney+ show.

“Gina Carano is not currently employed by Lucasfilm and there are no plans for her to be in the future. Nevertheless, her social media posts denigrating people based on their cultural and religious identities are abhorrent and unacceptable,” said a Lucasfilm spokesperson in a statement to TheWrap.

Carano came under fire last month as the hashtag #FireGinaCarano trended over an Instagram post comparing being Republican today to being Jewish during Nazi Germany.

“Jews were beaten in the streets, not by Nazi soldiers but by their neighbors…even by children. Because history is edited, most people today don’t realize that to get to the point where Nazi soldiers could easily round up thousands of Jews, the government first made their own neighbors hate them simply for being Jews. How is that any different from hating someone for their political views,” wrote Carano.

In an interview with conservative pundit Ben Shapiro, Carano acknowledged that there are significant political differences between her and Mandalorian headliner Pedro Pascal and that he has done things that she’s disagreed with, referencing a tweet Pascal sent in January of Texas Sen. Ted Cruz’s office phone number following the U.S. Capitol attacks. But she said that Pascal never let those differences come in between them while they were filming the hit “Star Wars” Disney+ series.

“I adore Pedro. I adore him. I know he’s said and done some hurtful things. I don’t think posting anybody’s number on social media is OK, ” she said. “But we had an agreement after we realized we were a little bit politically different. We had an agreement that, first and foremost, you’re a human being. And you’re my friend first.”