Home » TV & Movies » Exclusive: 'On My Block' Star Julio Macias Reflects on the Show's Ending and Saying Goodbye to Oscar/Spooky

*MAJOR SPOILERS FOR SEASON 4 OF ON MY BLOCK BELOW!*

Shortly after On My Block‘s fourth and final season went live on Netflix, I hopped on what would be my last Zoom call with actor Julio Macias about the series. For the past few years, we’ve talked about the show and his character Oscar aka Spooky at length. And now, here we were, as he said goodbye to the very series that made him a household name.

Julio opens up to Cosmopolitan about Oscar’s fate, how the role changed the way he approaches his own future, and how a last-minute decision helped turn Oscar’s final scene into one that fans will remember forever.

Cosmopolitan: How have the last 24 hours been since the finale came out?

Julio Macias: I’ve tried to distract myself so I went to watch Venom: Let There Be Carnage yesterday with a friend. I’m following what everyone’s saying on Twitter and Instagram, and it’s really rewarding to see how people are reacting. There’s a lot of love for [On My Block] and it’s hard to say that I knew that fans were going to love this season. But I love seeing the reactions like, “Yo, they did my man wrong. He got his life together.” And to have it coupled with, “Great job, Julio Macias. I can’t wait to see what you do next,” is very rewarding.

Cosmo: What’s the biggest lesson you’ve learned from this experience?

JM: I’ve been acting since I was eight years old, but it wasn’t until I was around 16 when I told my parents, “This is what I’m gonna do.” Being in the industry, I was so worried or focused on the craft of acting I didn’t realize that part of it is encouraging your fans to follow your work. Being on this show exposed me to such an incredible fan base. I’m so so thankful and grateful for it. I also got married and during the first season, I was very immersed in the character that it spilled out into my personal life. Later on, it showed me that I needed to find a healthier way of doing this if I were to keep going. 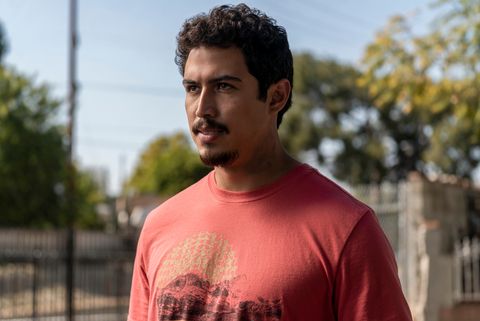 Cosmo: Just as Oscar was growing into a different person, you were also learning about yourself.

JM: That’s very much how it feels. I learned my own understanding of empathy. So much has happened in the last five years. I wrote this little blurb to Oscar, kind of like a goodbye letter. “Thank you for giving me the strength to play you truthfully, tragedy and all.” This character taught me how to stand up for myself, how to embrace my community the way that I had never done before. Learning how to accept and understand Oscar’s background, and maybe not condoning it but understanding it with empathy, really expanded my understanding of what it is to be Latino in the United States.

Cosmo: That’s also very interesting considering the fact that many actors probably wouldn’t have taken on a role like this because Oscar started out in a gang.

JM: There was a sense of hesitancy at first. Before I booked On My Block, Carlos Santos, J.J. Soria, who are from Genetefied, David Castañeda from The Umbrella Academy, and me talked about this. I even told my agent that I don’t want to go out for these roles because they’re not layered. But something that I learned is that we are all one community and how we express our frustration with society comes in different forms. Being in a gang is a form of protest. Do I condone that type of protest? No. Can I understand it empathetically? It’s a tough conversation, and there’s no right way to look at it.

When I read the beach scene with Cesar in the first season, I was like, “Yo, that’s, that’s interesting. That’s deep. That’s different.” Even after, when I physically morphed myself as Spooky, the amount of times that I got pulled over by cops just by looking like him was insane. I was treated like a different person. It was something that I never really thought about until I was playing him. By just shaving my head and walking around in a certain way, people were scared of me. Now when I do receive auditions to play gang members or anything like that, if it’s just about the intimidation, then someone will take on that role. But it won’t be me. I’m not scared to take on another role like that or whatever you would assume to be a stereotypical Latino character as long as the character is layered.

Cosmo: In our last interview, we wondered whether it was really possible for Oscar to leave the Santos for good.

JM: I think we see a little bit of that answer in this season. When I speak to veteranos who have gotten out, they’re at an arm’s length, but they’re not [completely] out. Even when they speak ill of the activities that they do, they try to explain it and not just trash talk it. It’s a very tough layered conversation.

I think what Oscar did in this fourth season was very selfish in a way. Everything that he had done before, even joining a gang, he did for his brother and because he had to be the father figure. He had to hold the fort down and secure the neighborhood. Me and Diego [Tinoco] had this conversation and said, “Of course, Cesar went into the game.” Because that’s the only thing his brother—his father figure—has been preaching to him for years on end.

It might not be a popular opinion and I’m happy that he got his happiness while he had it, but it’s selfish. He’s like, “This might come back to bite me in the ass. In the best of circumstances, I’ll go to jail. In the worst of circumstances, my kid’s gonna grow up without a father.” Happy is not the right word, but I’m happy that what happened to him happened to him once he got out instead of going down in a blaze of glory robbing a bank. It gives the audience the emotional depth of losing someone who you didn’t think that you were going to mourn. “Why am I mourning this bad man? This gangbanger?” It’s because he’s a human being. Cesar is going to have a better life now and Isabel is going to have a tough time raising that kid. I think that kid is gonna grow up resentful, but hopefully proud of what her father did at some point. 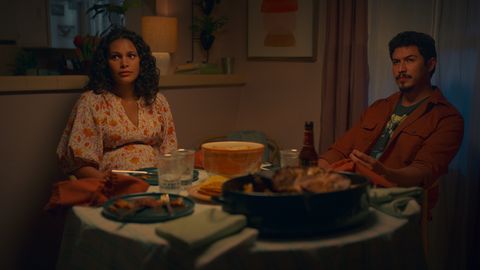 Cosmo: Oscar is smiling at Cesar as he dies. Was that a choice that you made as an actor? Or was there a specific reason that was decided by the writers or directors to do that?

JM: They gave me full range. The only note that was given was how to place my legs. There were lines written and then there was a discussion of what he should say, but co-creator Lauren Iungerich asked, “Why do you need to say anything?” A classmate kind of mentioned Life Is Beautiful, when the father sees his son looking and he’s playing soldier so that’s the last memory he has of his father even in the Holocaust. I wanted Oscar to let Cesar know that life is still good and beautiful. “I love you and thank you for being here with me. There’s no need for revenge. There’s no need for pain. Smile, because it’ll be okay.” When Cesar looks back, even at this traumatic memory, I hope he giggles and thinks, “That man that was smiling at me? That was my brother. Not the facade that he had to put on for me.”

Cosmo: This show is incredibly honest in its portrayal of this kind of life. Do you think there could have been an alternative where Oscar was still alive?

JM: There is an argument to be said about why do we keep showing violence on brown bodies? And why can’t we have the happy ending? Why can’t we live out our lives? I 100 percent back that up, but I always told Lauren that there had to be a consequence for Oscar. We couldn’t let him be a role model. Whether it was jail or this. It’s the harsh reality of this particular character. That doesn’t mean that that’s the reality for everyone that lived this life. We do see instances of making it out with Chivo and Ray who were in the Santos, and Jamal and Monse’s dad who were affiliated with the Prophets at some point. I think we need to sit in that pain, understand it, and hopefully transfer that feeling to what we see in our daily lives. Don’t clench your purse for no reason. Don’t step aside because you’re assuming something you know. These people are our people.

Cosmo: Even in his death, as we see with the mirror scene, Oscar is still serving as a father figure to Cesar. How was it filming that final moment?

JM: A discussion was had of, “Is it gonna be Spooky that comes back? Or is it Oscar?” That scene for me was definitely the toughest one in all four seasons. It felt like this one scene that connected me, Oscar, Cesar, and Diego. It felt like our characters and ourselves as people were connected. I saw Diego grow and he asked me so many questions in the first season. But by the fourth season, I’m thinking, “Man, you don’t have nothing to learn from me.” I don’t think that there was a single take that I did where I could hold my own. 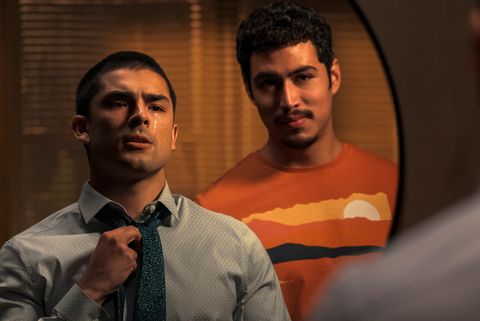 Cosmo: Does it feel like you’re now officially closing a chapter in your career?

JM: It feels like a transition more than a beginning or an end. I still audition just like everybody else, but the roles that are offered to me are so interesting now. We’re in negotiations for a couple of different projects, but all of them have come with this sense of, “We know you can handle this character.” Oscar was a big responsibility and there’s no coming back. I could only be so lucky to get another opportunity to play a character that, in my mind, people are going to remember for quite a while. I created something that people love and will remember.

Cosmo: There is a spin-off happening. Even though we won’t be seeing you in it, what would you like to share with the cast members of Freeridge?

JM: Trust your instincts. If something feels off and you would want to do it a different way, do what the director and the writers tell you because they’ve crafted this show, but then ask them, “Can I try one this way?” You never know how that one way will spark an idea.

Make it your own. There’s no need to try to copy us or try to live up to the original. Be your own thing. That’s what fans are gonna love: the genuine representation of you.

Cosmo: Any final messages to the fans?

JM: Thank you from the bottom of my heart. You have changed my life in ways that you can never fully understand. From my work to my personal life, you have helped me grow into the man that I am today. And I hope that I can continue to engage with and entertain you. Know that if my career goes up, it’s because of you and if I ever stand on any stage accepting any kind of accolade or award or anything like that, it’s because it started with you guys.