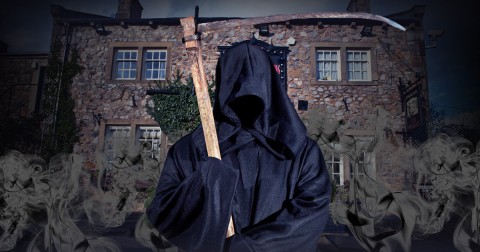 Another Emmerdale exit has aired in the form of Al Chapman (Michael Wildman), who was killed tonight by Cain Dingle (Jeff Hordley).

Al’s final scenes of course had to be alongside Cain, who discovered his affair with Chas (Lucy Pargeter) last night.

In a barn on Moira’s (Natalie J Robb) farm, Cain told Al that the shotgun he had in his hand was just for show and placed it down, ready to get his revenge via his fists.

However, when his enemy made another arrogant and awful comment, Cain made a beeline for the gun and when tonight’s episode opened, we established he got to the weapon first and managed to shoot Al in the chest.

With Al’s body on the floor, Cain froze, only to be interrupted by Kerry (Laura Norton), who had been a short distance away from the barn when the gun went off.

Kerry was horrified and had the emergency services called, which caused Cain to run back home and say his goodbyes to Moira and their children, fully aware of what would come next.

As Cain and Kerry headed to the police station for questioning, the news of Al’s death slowly started to circulate around the Dales, leaving Chas to hide how the ordeal has really impacted her.

Al made his arrival to the Emmerdale village in 2019 and since then, he became a character who wasn’t particularly liked among the residents and fans of the ITV soap.

Often when characters exit, tears are shed but this is Al Chapman – a character who was smug, self-centred and treated women poorly. He started affairs, broke people’s hearts and enjoyed inflicting pain on others, leaving us with the conclusion that actually, few will miss him.