Right-wing publisher Daily Wire, which is entering the film business, is fast-tracking Carano’s Western thriller ”Terror on the Prairie“

WEST HOLLYWOOD, CALIFORNIA – OCTOBER 19:Actor Gina Carano of Lucasfilm’s “The Mandalorian” at the DisneyGlobal Press Day on October 19, 2019 in Los Angeles, California. “The Mandalorian” series will stream exclusively on Disneywhen the service launches on November 12. (Photo by Alberto E. Rodriguez/Getty Images for Disney)

Gina Carano is set to return to a film set for the first time since her dismissal from the “Star Wars” Disney+ series “The Mandalorian,” as right-wing publisher The Daily Wire prepares to launch its film division with a fast-tracked production of Carano’s Western thriller “Terror on the Prairie.”

Directed by Michael Polish, the film follows a family of pioneers who defend themselves from a band of vicious outlaws on the prairies of Montana. The film also stars MMA fighter Donald “Cowboy” Cerrone, standup comedian Tyler Fischer and Nick Searcy (“The Shape of Water”). 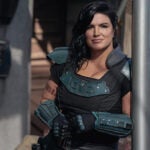 The film is scheduled for release next spring on The Daily Wire, where it will be made available to subscribers.

“With the precariousness of the current Hollywood landscape and the remarkable overreach by its ruling class, we made the tough, but prudent choice to ride further out into the wild west to make movies on our own terms,” said Sonnier in a statement. “The Daily Wire has given Gina and our team all the support any producers could ask for. Now, we must go make them proud by producing something that is truly great.”

“Terror on the Prairie” is the first project to come from the partnership between Carano and the Daily Wire, which was announced just two days after Carano was fired over social media posts in which she compared being a conservative in Hollywood to being Jewish during the Holocaust. Carano played Cara Dune, a former Rebel soldier adjusting to life after war following the downfall of the Galactic Empire.

Shortly after her dismissal, The Daily Wire posted an interview between Carano and Ben Shapiro in which the actress condemned Disney for firing her.

“I’m not the only one that’s ever been bullied by this company, and I know that so deeply,” she said. “They’ve been all over me and they’ve been watching me like a hawk. And I’m watching people on the same production and they can say everything they want, and that’s where I had a problem. I had a problem because I wasn’t going along with the narrative.”

Mamma Mia 3 with new ABBA music ‘will happen, there’s meant to be a trilogy’ says producer