It started with a simple question: Why aren’t there more films about Black superheroes? For director Gina Prince-Bythewood, that query opened her journey into directing “The Woman King” and entering the highly rarefied space of being a Black female filmmaker making a big-budget blockbuster that centered on a Black story with a Black woman as its star. Superheroic to boot.

“I’ve always seen myself here, but the industry has not seen me here,” Prince-Bythewood said in a recent interview with IndieWire. “[My whole family] loves Marvel movies. We go to all of them, and it was maybe two years before ‘Black Panther’ came out, and my older son said to me, ‘Why isn’t there a Black superhero?’ And at that moment I was like, ‘I keep saying I would love to do that for you, so let me stop saying I would love it, and do that.’ So what steps do I need to take?”

Prince-Bythewood set out to carve her own path toward a Black superhero movie. In 2017, the former “A Different World” writer — best known for her character-driven films like “Love & Basketball” and “Beyond the Lights” — returned to television to direct the pilot of Marvel’s short-lived Freeform series “Cloak & Dagger.”

Not only did that allow Prince-Bythewood to add “Marvel director” to her resume, but she got to direct her first Black superhero — actor and rapper Aubrey Joseph portrayed the teenage Cloak. “I got to show [my son] a superhero that looked like him,” the filmmaker said. “Once you’re in that world, that’s that first step.”

Prince-Bythewood was then picked to direct Marvel’s Spider-Man spinoff, “Silver & Black,” which would have made her the first Black woman to direct a studio-produced superhero film. The film was ultimately scrapped, but it continued to show off Prince-Bythewood’s evolving sensibility as an epic-minded filmmaker. 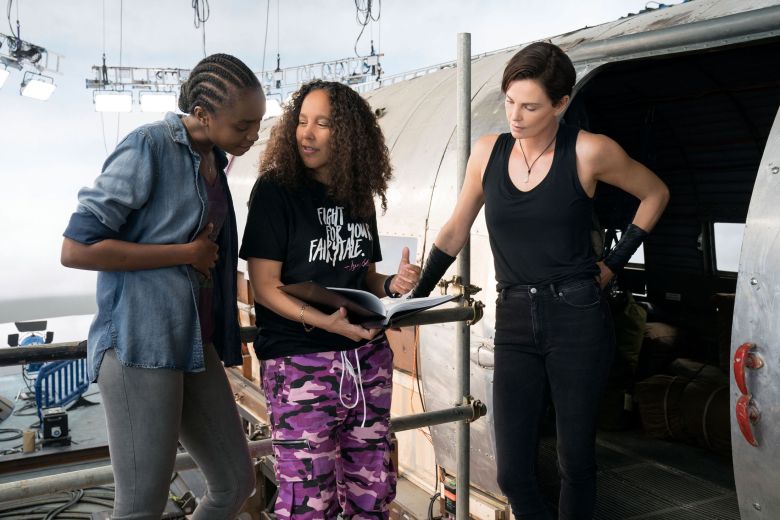 “That was a year and a half of my life and I learned a tremendous amount,” she said. “Even just being attached to that then led to ‘The Old Guard.’ It’s not even irony. What is it? The hellishness of it is, you can’t get in the room if you have no action experience. But how do you get action experience?”

It’s a sticky Catch-22, and one that “The Woman King” producer Cathy Schulman faced when it came to selecting a director for her long-gestating historical epic. In 2015, actor-turned-screenwriter Maria Bello pitched her a story about the Agojie, an all-female warrior unit that protected the West African kingdom of Dahomey for centuries. Schulman loved it; Hollywood was slow to follow suit.

“I think it’s easier to repeat what’s already been done than to forge new ground, and I think it’s because the studios and the financiers, everybody, they’re suffering through the crowded marketplace and how to do something that can stand out,” Schulman told IndieWire. “Then they make the mistake of thinking, ‘If I do what has been done before, it’ll stand out.’ But if you think about it, that’s kind of an oxymoron. It doesn’t make any sense. You’re better off to do the thing that’s different.” 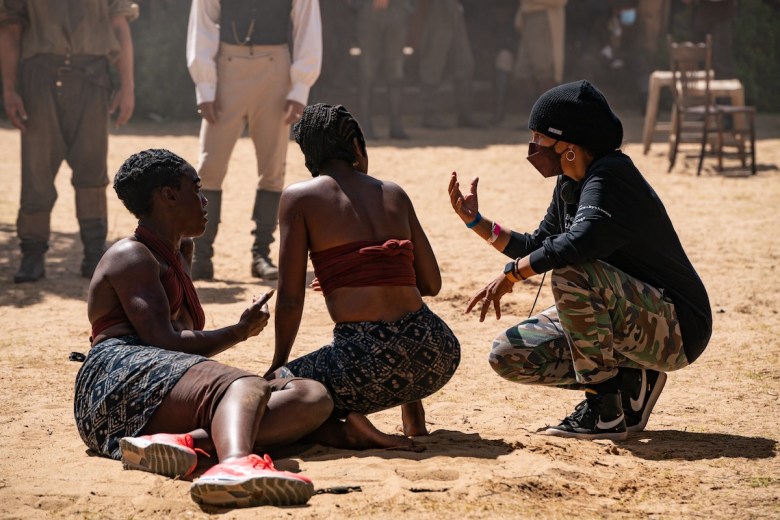 Lashana Lynch, Thuso Mbedu, and Gina Prince-Bythewood on the set of “The Woman King”

So how do you prove you can do the thing that’s never been done before? When Schulman and Sony locked in Viola Davis to produce the film and star as General Nanisca, Prince-Bythewood was in post-production on her Netflix superhero hit, “The Old Guard.” The director knew “The Woman King” was the next step she wanted to take.

“This was a big, epic script, a big epic story with big set pieces, and I needed to show them that I could do that,” Prince-Bythewood said. “I’ve been very deliberate in my choices in my career. And I told them, ‘I feel like everything I’ve done up until this point has made me ready to do this film.’”

Schulman also saw Prince-Bythewood’s careful choices at play and was thrilled by her earlier work, especially the more emotional entries. “First and foremost, she’s like a team captain, hence ‘Love & Basketball,’” Schulman said. “The idea that we were going to do a movie about a platoon, essentially, and that we wanted to differentiate each of the people in that group and also make sure their interpersonal relationships were interconnected, that was obviously a given with her former work.”

Prince-Bythewood had show she was up to the challenge of directing a sweeping historical epic for a major studio like Sony, with a relatively modest budget of $50 million, so she invited them to see her work. “The Old Guard” was her most action-driven entry yet, and she knew it showed her prowess with a seemingly new skill set.

“She invited us, Viola, and Julius [Tennon, Davis’ husband and also a producer] and I, to see ‘The Old Guard’ in the editing suite,” Schulman said. “We were like, ‘Wow, she really kicked some serious butt on this action.’ Any fears that may have existed about the sort of size of this endeavor were instantly removed. She became the right target and she also really reacted to it in a personal way.” 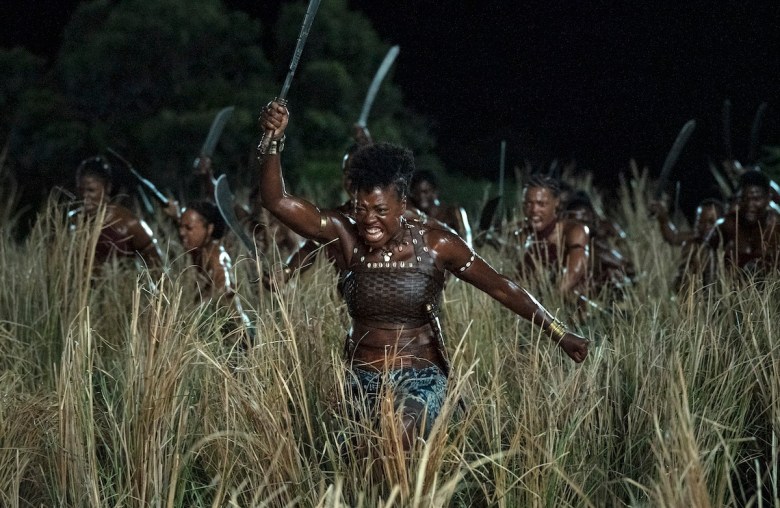 Davis was impressed, but she also gravitated toward the emotion Prince-Bythewood wanted to bring to the story. Part of the film follows young Agojie recruit Nawi (rising star Thuso Mbedu) as she navigates a complicated relationship with Davis’ Nanisca when they discover a link that goes beyond their warrior aspirations. For Prince-Bythewood, who was adopted as a child, it was a personal revelation.

“By the industry standards, it helped to see ‘The Old Guard,’ certainly,” Davis told IndieWire. “But for me, everything was about the first meeting with Gina at JuVee Productions, me and my husband’s production company, where she talked about the story of Nawi and Nanisca and related it to her own story. She just couldn’t hold back, this strong woman. If you see Gina, she definitely carries herself like a woman who’s very aware of her strength. To see her openly weep, that’s what did it for me.”

Prince-Bythewood’s confidence impressed everyone. “In that first meeting, I knew my connection to the story,” Prince-Bythewood said. “I knew everything about these characters, my athletic background, who these women were, how to tell the story. And then, I had the swagger of, I’ve just done this action, let me show you. After they saw that, then that was it.”

The director was hired to direct the film in 2020, and set out to make it on location in South Africa in November of 2021. In just the third week of shooting what was already a tight production, the rise of the COVID-19 omicron variant shut down production until January 2022. 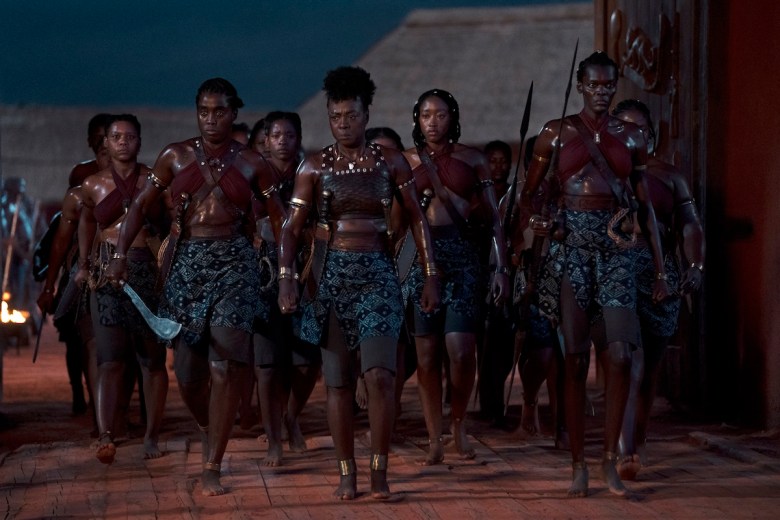 “This has been a really long journey. That was the toughest shoot in my career, but also the most joyous,” Prince-Bythewood said. “I felt like every day I was just barely making it, because of the [short] number of days, and then we got shut down. I remember talking to my husband and I was like, ‘I feel like I’m just surviving and not thriving.’ On that break, I said to myself, ‘You are in a position here that you’ve dreamed of, to be on set with this level of talent. If I don’t come out of this process having enjoyed this, taking it in, then what am I doing this for?’”

That changed her thinking — or perhaps more accurately, reminded her why she pushed so hard for the film in the first place. The warrior spirit that guided her, that fight, was the very thing she had shown Davis, Tennon, and Schulman and got her the job in the first place.

“I’m telling you, when someone is motivated by their heart and their passion, whatever that project is, they protect it, they nurture it, they honor it,” Davis said. “That’s a passion I personally want to see. Those are the people I want to see on my team. [Seeing that in Gina] made her not just badass; that made her Agojie.”

Sony will release “The Woman King” in theaters on Friday, September 16.

The truth about Sinbad’s recent stroke