When he tried to figure out how to get the audience invested in his postapocalyptic sci-fi drama, Clooney remembered the hospital show he once appeared on 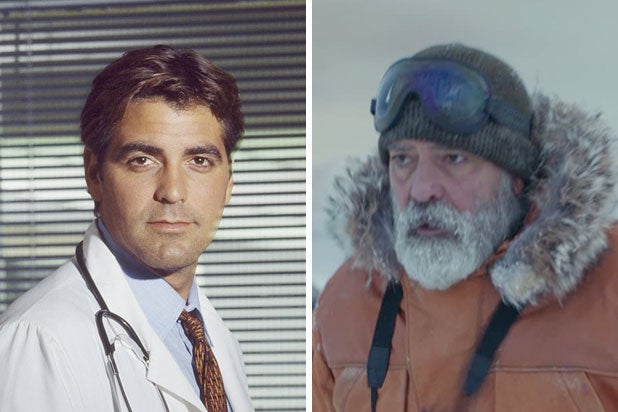 George Clooney has come a long way since his breakout role as the hard-partying, womanizing pediatrician Doug Ross on NBC’s  1990s hit “ER.” But the actor-turned-filmmaker said he drew on lessons from his work on the medical drama while directing and starring in his new sci-fi epic, “The Midnight Sky.”

The movie, set partly in outer space and partly in the frozen expanses of the Arctic, is by far the biggest and most ambitious of the seven movies that Clooney has directed. Based on the novel by Lily Brooks-Dalton, it takes place about 30 years in the future, when an unspecified calamity has threatened to make Earth unlivable and a team of astronauts is returning from a scouting mission at a potentially inhabitable moon of Jupiter.

In addition to directing, Clooney plays a key role in the earthbound scenes as a terminally ill scientist named Augustine Lofthouse who’s remained behind at an Arctic base that he thinks is deserted until he encounters a young girl, Iris (Caoilinn Springall). He’s driven to contact the returning astronauts, who include David Oyelowo, Felicity Jones, Kyle Chandler and Demian Bichir, to tell them not to come back to Earth — but they’re experiencing their own problems, including the unexpected pregnancy of Jones’ character.

Clooney acknowledged that it was a challenge to keep audiences invested in both storylines. “It was always a trick,” he said. “Because you’ve got basically two movies. One half is ‘Gravity,’ the other half is ‘The Revenant,’ and they’re bouncing back and forth.”

He felt on surer ground with the Earthbound scenes. “I knew that emotionally, we were going to be fine on my side, because it’s a guy and a little girl that he’s protecting,” he said, noting that this is where his experience on that NBC medical drama factored into his preparation. “I played a pediatrician on ‘ER,’” he said. “I was a womanizer, I was a drunk, but as long as I was nice to kids and looked out for kids, the audience would be like, ‘Oh, he likes kids!’ So I knew that our stuff was going to be protected.”

For the scenes in space, Clooney said he wanted to make sure audiences “root for them (in space) along the way, but you can’t just have them sit there and give exposition after two years in the ship together. They can’t talk to each other about their whole lives, because they would have done that already.

He added, “So you had to find things in the moment that caught you up emotionally. Sometimes it was the fun things — sometimes it was the guys singing “Sweet Caroline.” Sometimes it was giving each other s—. And sometimes it was how good they perform under stress. I kept talking to the guys about it: ‘Listen to those black-box recordings of planes that are going down. Those pilots are just matter of fact. They don’t panic.’ So we really focused on making sure that these guys were professional at all times.”

Even in those space scenes, Clooney said he drew upon his “ER” days for inspiration. “When we did ‘ER,’ what separated us from other hospital shows was we never sat around and felt sorry for ourselves,” he said. “We just kept doing job after job, case after case after case after case. And that the overwhelming feeling at the end was, ‘Wow, they’re really accomplishing something.’ But none of us would ever say, ‘We’re really doing great work!’ That was the feeling we had on this, which is to constantly keep everybody doing their job and nobody panicking. You tend to rally around people like that.”

Emmerdale: Bob Hope's blunder explained as he applies for a dating website to make Wendy jealous