“Therapy doesn’t have a target audience,” psychologist Brooke Taylor insists. “Everyone can benefit.”

The good doctor is right about the wide-ranging value of mental health. Scripted dramas about therapy, however, tend to have a very specific, niche audience — particularly when they are dramas like In Treatment, which are about therapy and nothing else.

The original run of In Treatment, based on the Israeli drama Be’tipul, lasted for three seasons on HBO, from 2008 to 2010. The focus then was on Gabriel Byrne as Dr. Paul Weston, a brilliant, devoted therapist who was better equipped to address the problems of his many patients than his own. Each week featured a handful of episodes depicting Paul’s sessions with various clients (played over the years by a murderer’s row of actors including Blair Underwood, John Mahoney, Alison Pill, Hope Davis, and Irrfan Khan), and concluded with an episode where Paul sought counsel from his own therapist (Dianne Wiest in the first two seasons, Amy Ryan for the third). The structure essentially made each episode into a two-character, one-act play, and brought out the best in its remarkable ensemble. As the grieving father of Underwood’s character, Glynn Turman gave one of the single most powerful performances in television history, and others, like Mahoney and Khan, weren’t very far behind him. Tying it all together was Byrne, who made the art of listening as riveting as any monologue delivered by his co-stars. But the audience for two people talking about their emotional problems for a half-hour at a time was small from the start. When Byrne decided to walk away after those three seasons (a remarkable run, since each showrunner quit after a single year due to the intense workload), HBO didn’t push back or try to retool the show around a new doctor.

Everything on TV is micro-targeted these days, though, and revivals are all the rage in an attempt to cut through the clutter of 500-plus scripted TV shows per year. Thus, yesterday’s low-rated critical darling is today’s splashy sequel series, with three-time Emmy winner Uzo Aduba (Orange Is the New Black, Mrs. America) stepping into the therapist role. Brooke, we learn early on, is a protégé of Paul’s, and the new season — officially referred to by HBO as In Treatment Season Four — is structurally and thematically very similar to its predecessors, even as Brooke herself is in many ways quite different from her mentor.

Again, the first three episodes per week(*) have Brooke working with a patient: Eladio (Anthony Ramos), a home health worker feeling isolated during the Covid pandemic; Colin (John Benjamin Hickey), a white-collar criminal who has court-mandated therapy as a condition of his parole; and Laila (Quintessa Swindell), a teenager whose imperious grandmother wants her to prepare for life in college. And rather than go to her own therapist for each week’s concluding episode, we instead see Brooke discussing her problems with her friend Rita (Liza Colón-Zayas), and occasionally with her boyfriend Adam (Joel Kinnaman).

(*) HBO tried lots of different ways to schedule the show in its original run, across multiple HBO channels and On Demand. The primary approach this year involves two episodes (Eladio and Colin) debuting Sunday nights at 9 and 9:30 PM, and the other two (Laila and Rita) Mondays at the same time.

The patients are meant to reflect issues Brooke is dealing with in her own life, which we learn about bit by bit through their sessions, through occasional scenes unrelated to them, and especially through those week-ending conversations with Rita. Brooke presents herself as far more polished than the rumpled Paul: Aduba is always impeccably styled, fitting beautifully into the gorgeous ranch house in L.A.’s Baldwin Hills section from which she temporarily runs her practice. It’s a house designed by her celebrated architect father, whose recent passing has sparked multiple crises at once for her, ones we can see her working through while trying to stay focused on each patient. Colin, the most combative of the trio, even unwittingly calls her out in one episode, saying, “Come on, doctor. It’s kind of about you, too.”

For the dozen or so people who remember the Byrne seasons, Brooke’s patients, and the relationships she has with them, will also feel like echoes of Paul’s. There’s some emotional transference going on between her and Eladio, much like Paul had with his initial patient Laura (played by Melissa George), though there it was about misplaced sexual desire and here it’s about Eladio’s hunger for a mother figure. Colin’s struggle to crawl out from the wreckage of his old tech mogul life evokes the professional calamity that Mahoney’s Walter was dealing with in Season Two, while Laila recalls elements of the many kids that Paul helped over three seasons. This is also a clear point of demarcation between our heroes: Paul was always most in command of his therapeutic powers with children and teens, where you can see Brooke going through a lot of trial-and-error to connect with her new young charge.

That building of relationships, and the many starts and stops Brooke has as she figures out how to deal with each person in her life, is where a lot of the fun comes in what would otherwise risk being a dry, navel-gazing format. Though Brooke is dressed to the nines, she can sometimes seem like a modern-day Columbo, with the patients often underestimating her powers of observation until the moment when she uses a seemingly innocent remark of theirs to unlock a new mystery about them. The Colin episodes in particular have this energy a lot of the time, and are not coincidentally the liveliest episode most weeks. 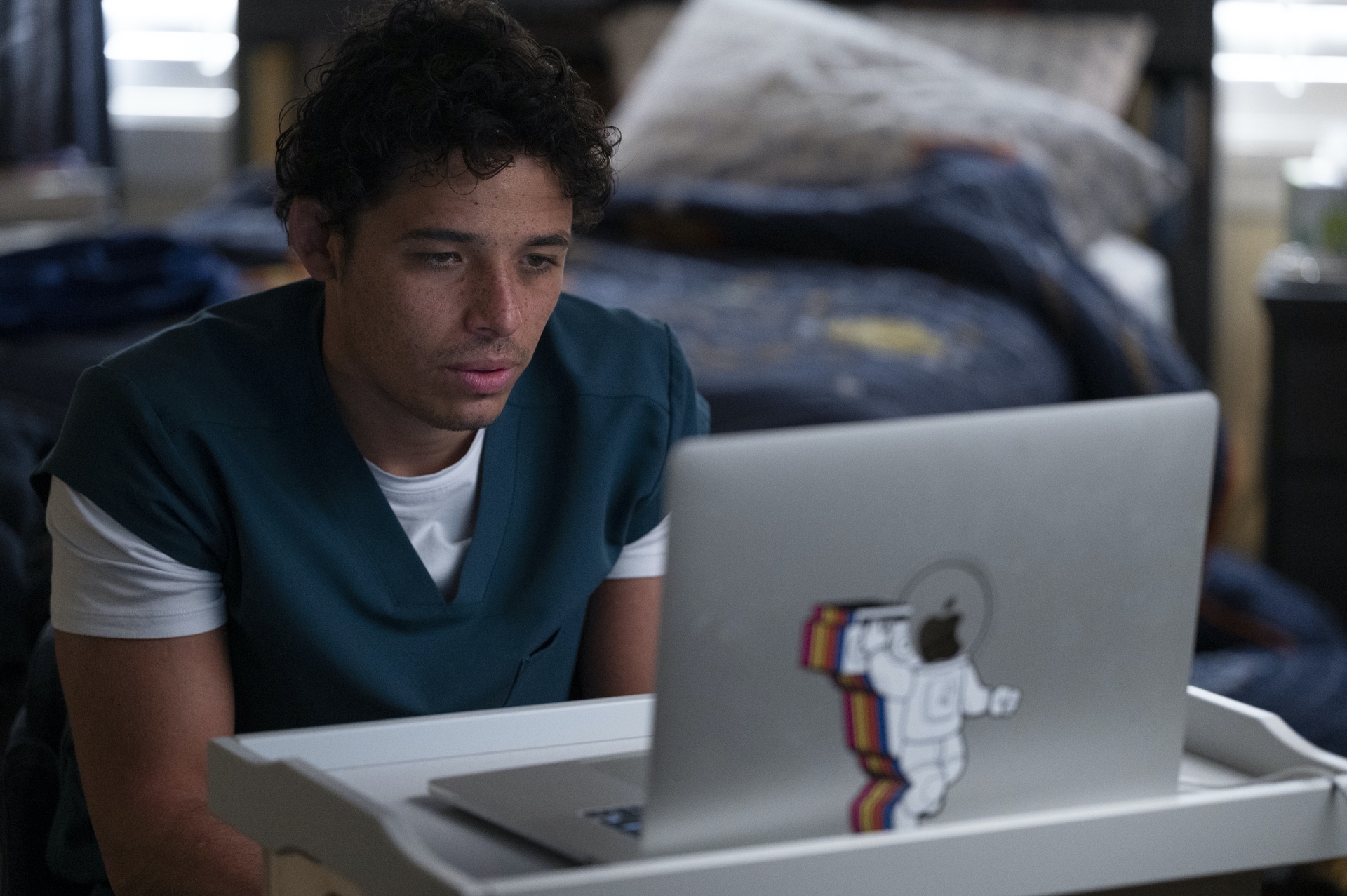 Anthony Ramos is electric in his episodes, and Eladio is the patient most urgently in need of help — other than perhaps Brooke herself. But because they’re video chatting or talking on the phone while he stays with the wealthy employers who are paying for his treatment, it dulls some of the edge the show usually gets from putting two actors in a room together for 20 minutes. Still, their inability to meet in person — and Eladio’s difficulty finding relief from what sounds increasingly like a hostile work environment — becomes part of the tension in their relationship, and it feels appropriate to see Brooke practicing at least some telemedicine during the pandemic. (The Covid details in other episodes are spottier, though, as if having each patient hand Brooke a copy of their vaccination card largely absolves the writers from dealing with how quarantine might be impacting their emotional problems.)

The Laila episodes can be hit or miss, as if she’s more a symbol for Brooke’s problems than a three-dimensional character in her own right. (The shifts in tone from session to session with her are also far more jarring than when Colin is a jerk one week and trying to be nice the next.) And the ones with Rita and Adam can sometimes be too blunt in how they address Brooke’s own emotional turmoil: “I know how to hold my patients’ pain,” Brooke tells Rita, to which Rita replies, “And who holds your pain?” This is perhaps meant to illustrate the difference between a civilian and a trained psychologist, but their conversations can feel clunkier, despite the strong rapport Aduba has with Colón-Zayas.

But then, the very structure of In Treatment lends itself to some episodes, and patients, being more engrossing than others(*) — and not always the same ones for one viewer to the next. Because the show is ultimately the therapist’s story, and important details can be revealed with any patient at any time, it’s not one where the audience can just pick and choose which characters to watch. You have to go in with the understanding that, just as Brooke won’t hit psychological pay dirt in every session, In Treatment will not be thrilling every time out. But when it is — when, say, Brooke figures out the exact right buttons to push to get Colin to admit something he’s been in denial about all session, or when Brooke starts dropping her professional boundaries while talking with Eladio — it can make the more sluggish parts feel very much worth it.

(*) The exception: Season Two, where all four patients (plus the Byrne/Wiest episodes) were fantastic, and I would be hard-pressed to elevate one over the others.

And just as the original show was mainly an excuse to have these remarkable acting duets between Gabriel Byrne and friends, the revival more than earns its money as a showcase for one of TV’s great discoveries of the last decade. Aduba was just a guest star in the first season of Orange, playing a relatively minor character on a show with an enormous cast. But her physicality and magnetism cut through instantly, as did her mastery of the show’s sometimes messy balance of comedy and drama. (Due to a quirk in the eligibility rules for Orange over the years, she and Ed Asner as Lou Grant are the only actors to win both comedy and drama Emmys for playing the same character.) And the loose-limbed expansiveness with which she played Suzanne (a.k.a. “Crazy Eyes”) was nothing like the fiery way she embodied trailblazing presidential candidate Shirley Chisholm in Mrs. America, which in turn bears almost no resemblance to how tightly controlled she is as Brooke, even when Brooke herself is wildly out of control. Like Byrne, Aduba knows how to make Brooke’s silent reactions as noteworthy as her dialogue and speeches, and the gradual peeling of her onion proves an even worthier endeavor than the work Brooke does with Eladio and the others.

Yes, you sometimes have to sit through a lot of chatter that goes nowhere as Brooke regroups and tries another approach. But even those seeming dead ends have value. When Eladio apologizes for going off on a tangent, Brooke assures him, “It’s all relevant.”

Is In Treatment still a niche show a decade after Paul Weston disappeared into a crowded New York sidewalk in the Season Three finale? Yes. Is it still a great show? Absolutely.

The fourth season of In Treatment premieres May 23rd on HBO and HBO Max. I’ve seen the first four weeks’ worth of episodes (out of six total).

How Brandi Passante Got Her Start On Storage Wars