Given the clamor surrounding “It Chapter Two,” there really wasn’t much the cast and director could say about the upcoming movie, even after sharing the new trailer and three new scenes to an enthusiastic Comic-Con crowd. But during Warner Bros’ hour-plus ScareDiego panel in San Diego, director Andy Muschietti and cast members Jessica Chastain, James McAvoy, Bill Hader, James Ransone, Jay Ryan, Isaiah Mustafa, and Andy Bean kept circling back to a central theme of the upcoming film: childhood trauma.

“There’s a lot of emotion in the movie,” Hader said. “It really was about childhood trauma — all of us growing up together [with it]. It wasn’t just this awesome scary movie, which it is, but it also has a really beautiful story to it.”

“As much as ‘It Chapter One’ is a movie about friendship and the power of unified belief, the second part is more about trauma,” Muschietti said. “We will discover things that we didn’t know about The Losers — [things] that started in that summer of 1989. That event cemented their paths from [when they were] young to adulthood, making their behavior pathological and recurring. So some of the things that you’re going to see in ‘Chapter Two’ are things we don’t know about The Losers, and the event that started it all happened that summer. The reason why we didn’t see it in ‘Chapter One’ is they don’t remember.”

The scenes shared with the audience supported that idea. One lengthy sequence sees the group reuniting for the first time since they grew up, including a moment when Mike (Mustafa) talks about how his friends memories may have been affected by leaving town. The second scene extends a scene from the trailer, where Bill (McAvoy) gets trapped in a hall of mirrors with Pennywise (Bill Skarsgård) as he tries to protect a kid. The last scene shared was deeper into the movie, and even though there were no significant spoilers in any of the clips, moderator Conan O’Brien asked the audience (on behalf of Warner Bros.) not to share too much about what they saw — so that’s really all that can be said until the movie is out.

“It Chapter Two” picks up 27 years after the events of the first movie, and the new story centers around the grown members of the Losers’ Club returning to their hometown of Derry, Maine after It/Pennywise returns stronger and crueler than ever. Each of the main characters has suffered a different kind of trauma from their experience with the killer clown, as McAvoy said Bill was struggling with “survivor’s guilt” as an adult after what happened to his little brother, Georgie. 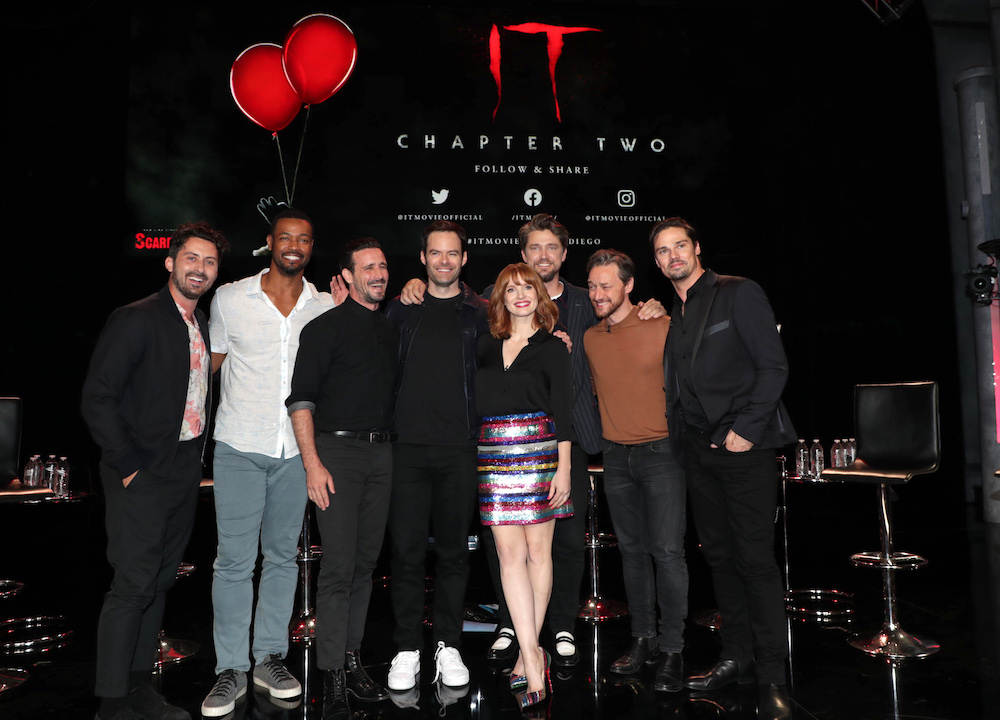 “The crux of Bill’s character […] is guilt — the guilt he feels about Georgie. He feels like it’s all his fault, and that’s his journey really,” McAvoy said. “I think [childhood trauma] is something that every single character in this movie has to deal with, and each and every one of us had to do our own specific research. Specifically for me, it had a lot to do with survivor guilt and that survivor complex. But the trauma they suffered and the consequences of that trauma might be different for each person.”

The cast said they mainly used the original film to master the various physical tics and mannerisms established by the younger actors. Each child star also wrote a letter to their older selves and shared it with the adult actor, which multiple people on stage described as very sweet. But the shoot itself wasn’t easy. McAvoy said he ended up with tendinitis for six months after shooting and pulled muscles in both of his legs. Hader said he had “dreams” of Muschietti asking for one more take time and time again, even after the director knew they got the shot. (Muschietti admitted to this, saying he still wanted options in the editing room.)

But Chastain may have had it the worst. When asked about her earlier statement about the vast amounts of fake blood brought in for the film, she confirmed the number of gallons used in one record-breaking scene: 4,500. O’Brien said that’s a world record, and it turns out that’s partly at Chastain’s request. The scene in question, which takes place in the film’s third act, originally required the actress to be covered from the neck down in blood.

“When Andy first talked to me about the scene, I thought it was really smart and brilliant,” Chastain said. “But when he said the blood is only going to come up to your collarbone — ‘Don’t worry, it won’t get on your face’ — I was like, ‘If we’re going to do it, let’s do it.’ I love horror films. I love ‘Carrie.’ And I said, ‘Let’s make ‘Carrie’ on steroids.”

Little did she know what that would mean for her daily routine.

“So before every take, there are wind turbines everywhere and I’m literally in a kiddie pool filled with blood, pouring buckets of blood on me,” she said. McAvoy added that the blood had to be “freezing” — because if it got too hot, the sugar would ferment and create a horrible stench — so Chastain was covered head-to-toe in smelly fake blood for “every shot of the third act,” her director said.

You’ll be able to see for yourself if it was all worth it, when “It Chapter Two” hits theaters nationwide September 6.