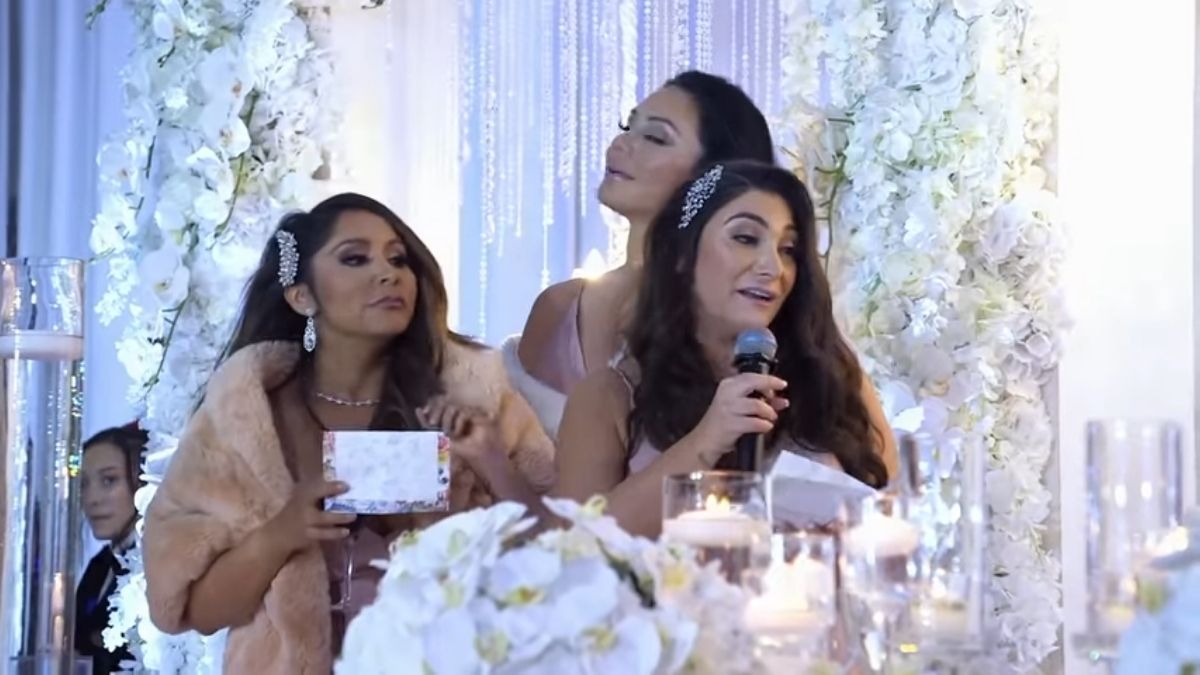 The premiere of Jersey Shore Family Vacation season four is just days away.  In honor of the premiere, the boys of the house; Vinny Guadagnino, Ronnie Magro, Pauly “DJ Pauly D” DelVecchio, and Mike “The Situation” Sorrentino, otherwise known as “RSVP” got together to recap the infamous wedding speech at the dramatic Season 3 finale.

Vinny started off by referring to himself as the “king of wedding speeches.” He said, “I killed it at Mike’s wedding. I was funny, I was charming, I was heartfelt and basically, the girls did the exact opposite and it went horribly wrong.”

Vinny was the first to offer his advice and he started by saying, “You gotta start off with a joke that makes everyone laugh and puts everyone at ease.”

The clip showed Deena and the girls making jokes about the wedding being Angelina’s third engagement and how it took her three attempts to finally film with them again and they said, “third time’s a charm.”

Pauly chimed in and said, “I’m like hiding my head under the table…the crowds reacting and I’m like…they’re not getting their jokes!”

Vinny added, “I respect that the girls tried to tell a couple of jokes but that’s where everything went sideways.”

The girls’ speech went on as Deena said, “You’re the lice to my hair.”

Snooki added, “You’re the fly to our sh*t”

But things really took a turn for the worse when the speech got to Jenni’s part, and she said, “You’re the dump to our island.”

The entire room started to boo and Pauly joked, “I think where they went wrong was to insult the island when the entire island shut down to be at this wedding.”

Vinny added, “Once you make fun of the Staten Island dump that’s not good…gotta know your crowd.”

Fans will recall that immediately after the speech, Angelina stormed out and told producers that the girls ruined her wedding.  The backlash became so bad that it eventually caused Snooki to make the decision to part ways with the show.

On her podcast, It’s Happening with Snooki and Joey, Snooki announced her departure and said, “I just need to remove myself from the show because I don’t like the direction that it’s going in when it comes to the drama and just the cattiness. I just can’t do it.”

Following Snooki’s announcement, JWOWW took to Twitter and wrote, “I watched my best friend quit because she couldn’t handle the stress. I stayed up so many nights hearing Deena cry over being called names she didn’t deserve. All while Angelina basked in the attention she was given.”

The girls have continued to be at odds with one another since Angelina’s wedding.  The new season will be the first time they have all been together since the infamous speech.

As if the tension won’t be bad enough, throw in filming during a pandemic and quarantine restrictions, and we have a recipe for what’s sure to be an interesting season.

Tune in this week to watch the drama and find out if the girls are able to move on from the wedding drama.

Batwoman Sneak Peek: Alice Hopes Her Big Kill Will Reunite Her and Kate