Julia Roberts may be one of the most famous people on the planet, but there’s no doubting she’s managed to keep her marriage to Daniel Moder pretty under the radar over the years. The couple tied the knot back in July 2002 after meeting on the set of the movie “The Mexican” two years earlier. Roberts, of course, starred in the movie as Samantha Barzel alongside Brad Pitt’s Jerry Welbach, while Moder served as a camera assistant on the production team.

The twosome’s relationship has always been somewhat private, and their wedding was no different. Per People, Roberts actually invited guests to her New Mexico ranch on July 3, 2002 for an Independence Day celebration, only for the two to tie the knot the following day. A longtime friend told the outlet at the time that Roberts was “genuinely happy” and the two had “promised to take care of each other.” And that they certainly have.

On July 4, 2021, 19 years on from their wedding, the “Pretty Woman” actor declared her love for Moder once again and proved they’re still going strong by sharing a rare photo with her man to social media. Keep scrolling for the sweet snap and what Roberts is saying now about her marriage after almost two decades.

Julia Roberts is 'just getting started' with Daniel Moder 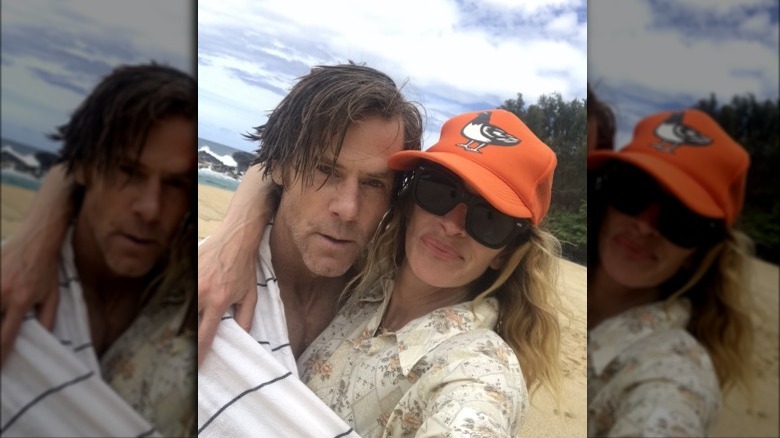 Julia Roberts showed off her love for her husband, Daniel Moder, on her Instagram account with a sweet selfie that appeared to celebrate both their wedding anniversary and Independence Day. The snap showed the couple at the beach as Roberts sweetly put her arm around the cinematographer.

Roberts, who previously dated Matthew Perry before finding longtime love with Moder, kept her eyes shielded from the sun with dark sunglasses and an orange baseball cap while Moder appeared to sport wet hair and a white top with thin navy stripes. “19 years,” she captioned the shot with a red, white, and blue heart, adding, “Just getting started!” Roberts also used the hashtag “#conwings” alongside a winking face emoji and tagged her husband’s account in the post.

The upload received hundreds of thousands of likes and plenty of praise from the couple’s famous friends. Rita Wilson — who celebrated 33 years of marriage to Tom Hanks in May — commented, “Happy happy anniversary! Gotta celebrate big on 20th!” to which Roberts responded, “we will come to your house!” Soccer player Jesse Lingard also shared praise, commenting with a red heart and heart eye smiley face.

Roberts and Moder have welcomed three children since tying the knot back in 2002. Roberts gave birth twins, daughter, Hazel, and son, Phinnaeus, in 2004, while they expanded their family to five in 2007 when they welcomed a second son, Henry, into the world.