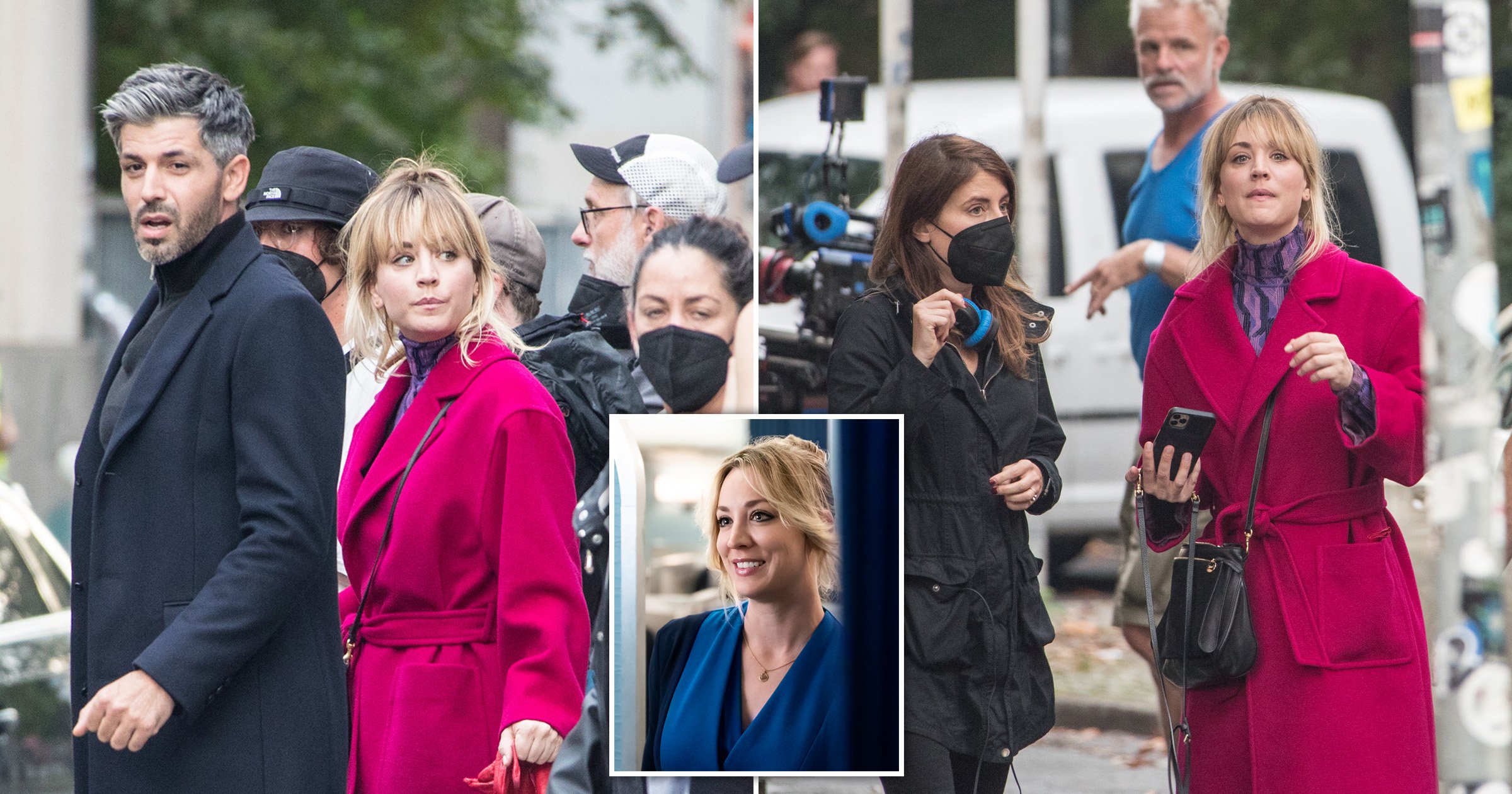 Kaley Cuoco has been spotted filming season 2 of her widely-acclaimed TV series The Flight Attendant, swapping the sunny skies of California for the cooler temperatures of Berlin.

Earlier this week, Kaley, 35, began production on the second season of the comedy-drama shortly after filing for divorce from her husband of three years, Karl Cook, 30.

In a post shared on her Instagram Story, The Big Bang Theory star shared her excitement over getting back to work, after season one of the show premiered in 2020.

In new photos of the actor captured on set in Germany, she can be seen wearing a hot pink trench coat, her hair styled in her character Cassie Bowden’s signature fashionably messy updo.

She accessorised her colourful outfit with a pair of burgundy heeled boots and red gloves, wearing a black pair of trousers and a geometrically patterned polo neck top.

In one picture, Kaley was pictured standing next to a man while surrounded by members of the crew wearing face masks, looking over her shoulder while gripping her gloves tightly.

In another image, she peered over a car window, a perplexed expression dawning on her face.

A behind-the-scenes shot showed Kaley deep in concentration while speaking to a woman wearing a mask, holding her phone in her right hand and wearing a black shoulder bag across her body.

The Flight Attendant stars Kaley as an alcoholic air hostess who wakes up one morning next to a dead body with no recollection of what happened the night before.

Kaley has received critical acclaim for her performance, earning an Emmy nomination among several other accolades.

It was recently reported that the actor asked the court to deny her ex-partner Karl spousal support after announcing their divorce.

According to documents obtained by People, she requested that spousal support be denied for both parties.

Her ex-husband Karl recently spoke out after their split, saying he was ‘dealing with some stuff’.

In a video shared on Instagram, he said: ‘Well it’s been a while since I’ve posted anything. Been dealing with some stuff. But let’s walk and talk, drink and talk.’

The Flight Attendant is available to watch on Sky and NOW TV.

‘This Is Us’: Why Did Kate And Toby Name Their Baby Hailey Rose Damon?

'RHOP': Monique Samuels Says Bindertime Stories Is a 'Summation' of Her Time on the Show