Home » Leslie Ash on lip fillers, life-changing injury and being back on booze as she returns to our screens after 'nightmare'

LESLIE Ash knows all about ordeals – spending years in and out of hospital, suffering a life-changing spinal infection and ending up on anti-depressants that left her numb.

Today the actress — famed for her roles in cult film Quadrophenia and Nineties TV sitcom Men Behaving Badly — reveals she is delighted to be making a return to our screens after more than a decade off. 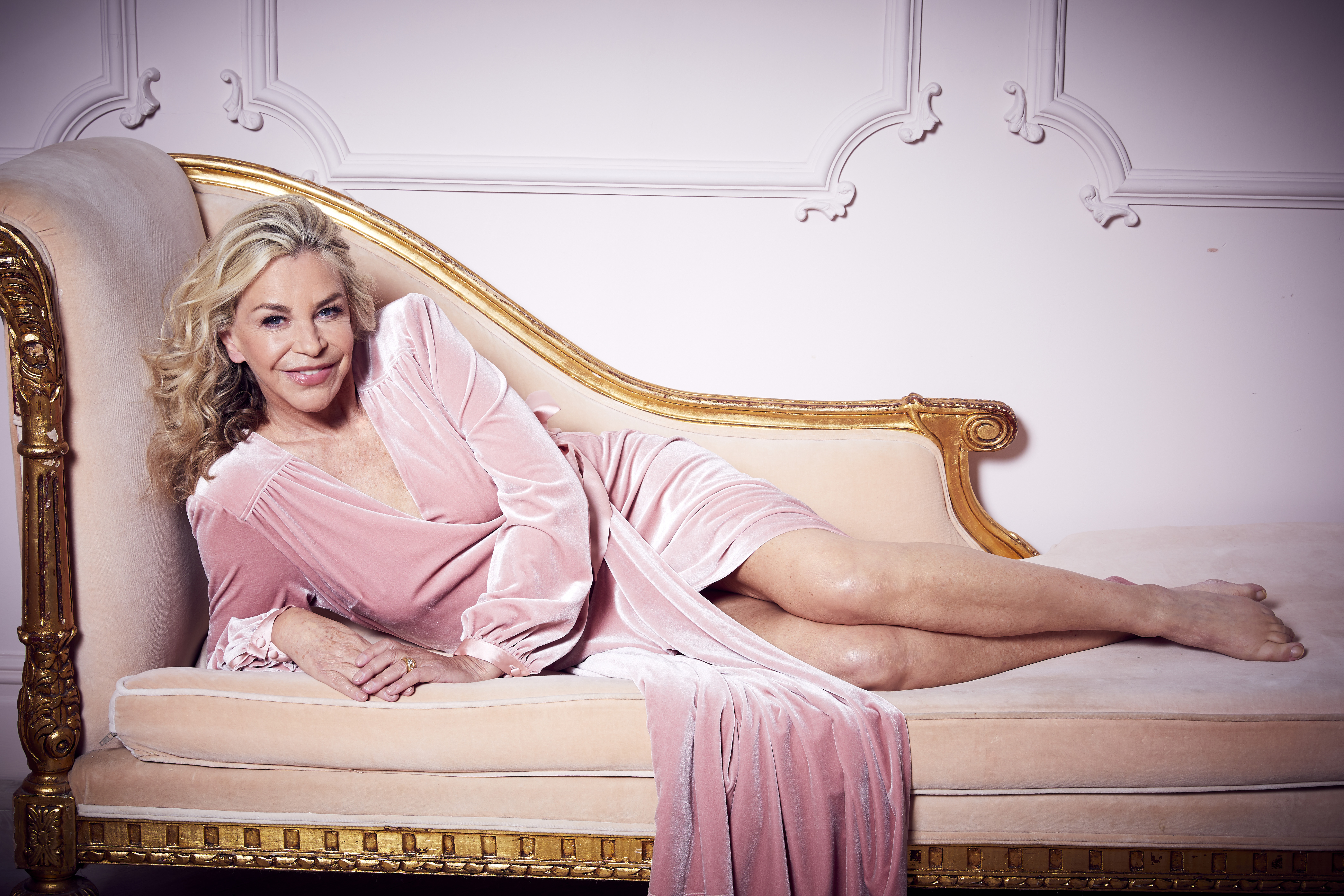 And Leslie, who starts her role in BBC1 daytime favourite Doctors later this year, hopes her troubles can help young girls avoid the perils she has been through.

Speaking about her lip enhancement which shocked many people 20 years ago, she said: “The only thing I’d say to people is: Do your homework.”

She also suggested her career prospects have been boosted by the pandemic — joking casting directors must have had their memories jogged about her talents while watching re-runs of Men Behaving Badly.

Leslie, 61, said: “I am overjoyed to be back on screen. I’m at my happiest when I’m working.

“I have been waiting a long time and been very patient and the world seems to have changed because of Covid — I’ve had loads of interest, which is fantastic.

“Maybe people are at home watching old episodes of Men Behaving Badly and that turns a light on.

“When I was in my 40s, I used to get angry because everyone going for the jobs was called Amanda.

“There was Amanda Holden, Amanda Redman and Amanda Burton, the other one in Silent Witness. I was out of work because of the Amandas!” 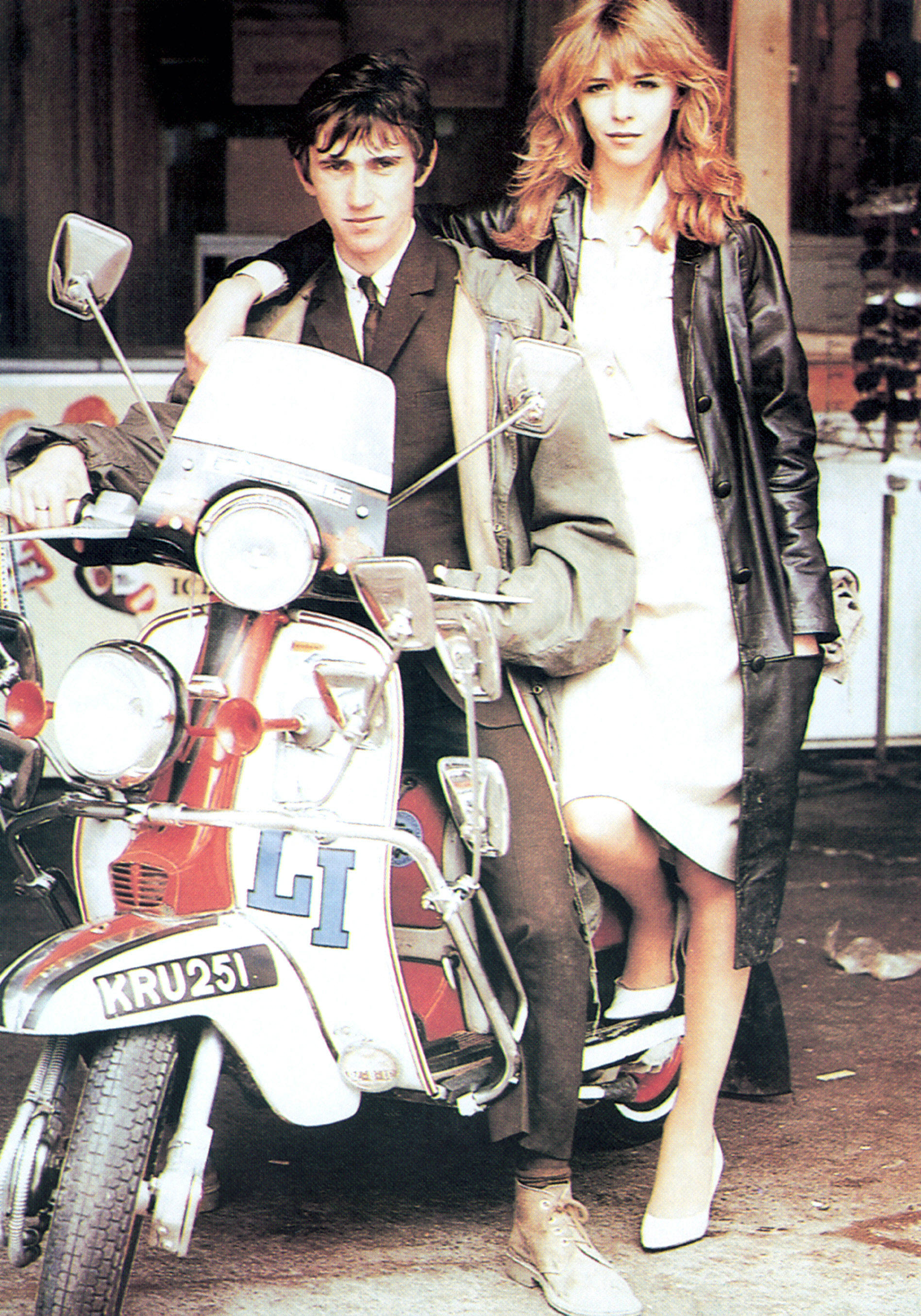 In an exclusive interview Leslie reveals how she has been left with a life-changing injury and sometimes needs a stick to walk.

But she has never been happier in her personal life after 33 years married to former footballer Lee Chapman.

Leslie shot to fame as Steph, the girl­friend of Phil Daniels’ Jimmy, in 1979 film Quadro­phenia.

But perhaps her most famous role was as Deborah — the long-suffering love interest of Neil Morrissey’s character Tony in Men Behaving Badly.

She said: “I hit the jackpot with Quadro­phenia and Men Behaving Badly.

“I love seeing Men Behaving Badly on Gold or the BBC. People say they are big fans. It was such fun — like being back at school.

"Neil was such a funny person to work with — they all were. The four of us were laughing all the time and taking the p*** out of people.

“It was like being in a band. We used to get really young fans in the audience. And it’s nice when someone comes up and says, ‘It’s Deborah from Men Behaving Badly.’" 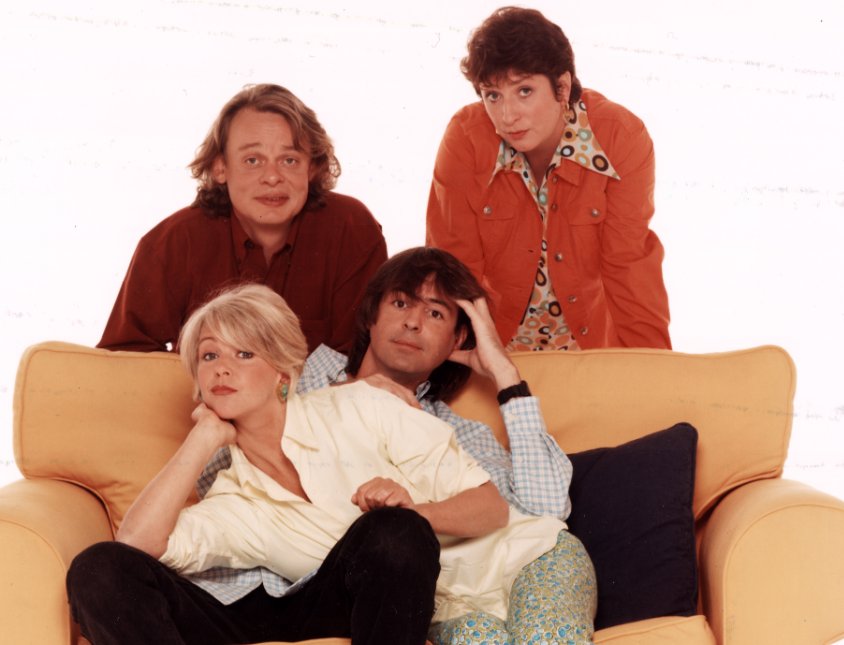 But Leslie being recognised by fans didn’t go down quite so well with her and Lee’s two sons, Joseph, 31, and 28-year-old Max.

She explains: “The kids hate it and if someone came up to me in Sainsbury’s for an autograph, Max would say to me, ‘Stop acting like Victoria Beckham’.

“If I watched them playing football he would make me sit in the car. He was so embarrassed.”

After the hit comedy ended in 1997, Leslie made appearances in ITV series Where the Heart Is and BBC medical drama Holby City. But in her 40s work largely dried up.

She said: “It was incredibly unfair. But because there are now more women writers, directors and producers we are really getting a good crack of the whip and it’s maybe going the other way.

“A lot of women producers will go out looking for women directors and for parts that are women-led. We are living in a really diverse world and I’m pleased that it’s changed because it was horribly stereotypical before.

In 2002, Leslie hit the headlines when a picture emerged of her after having botched lip fillers.

It’s nice when people come up and say: ‘Hey, it’s Deborah from Men Behaving Badly.’ The show was like being back at school.. all laughing and p***-taking

She insisted the photo had been tampered with but later admitted she had experimented with fillers.

She said at the time: “This ­­man-made plastic silicone has been ­inject­ed into me, gone into the muscles around my mouth and become hard. I had steroid injections which helped soften it a bit but it won’t ever go away.”

But Leslie’s health woes did not end there.

In 2004, having cracked two of her ribs falling off the bed during a sex session with Lee, she went to hospital.

There, she contracted a “deadly strain” of the MRSA superbug due to an abscess on her spinal column. It left her with a devastating injury.

Leslie was initially told she would never walk again, but she has managed to defy the odds and now only relies on a stick at certain times.

She said: “It was a nightmare. Twenty five per cent of my spine was damaged by the abscess I had on my back from the epidural.

“That happened to be the part that connects with my brain and gives me my balance. If I shut my eyes, I have no idea where I am. 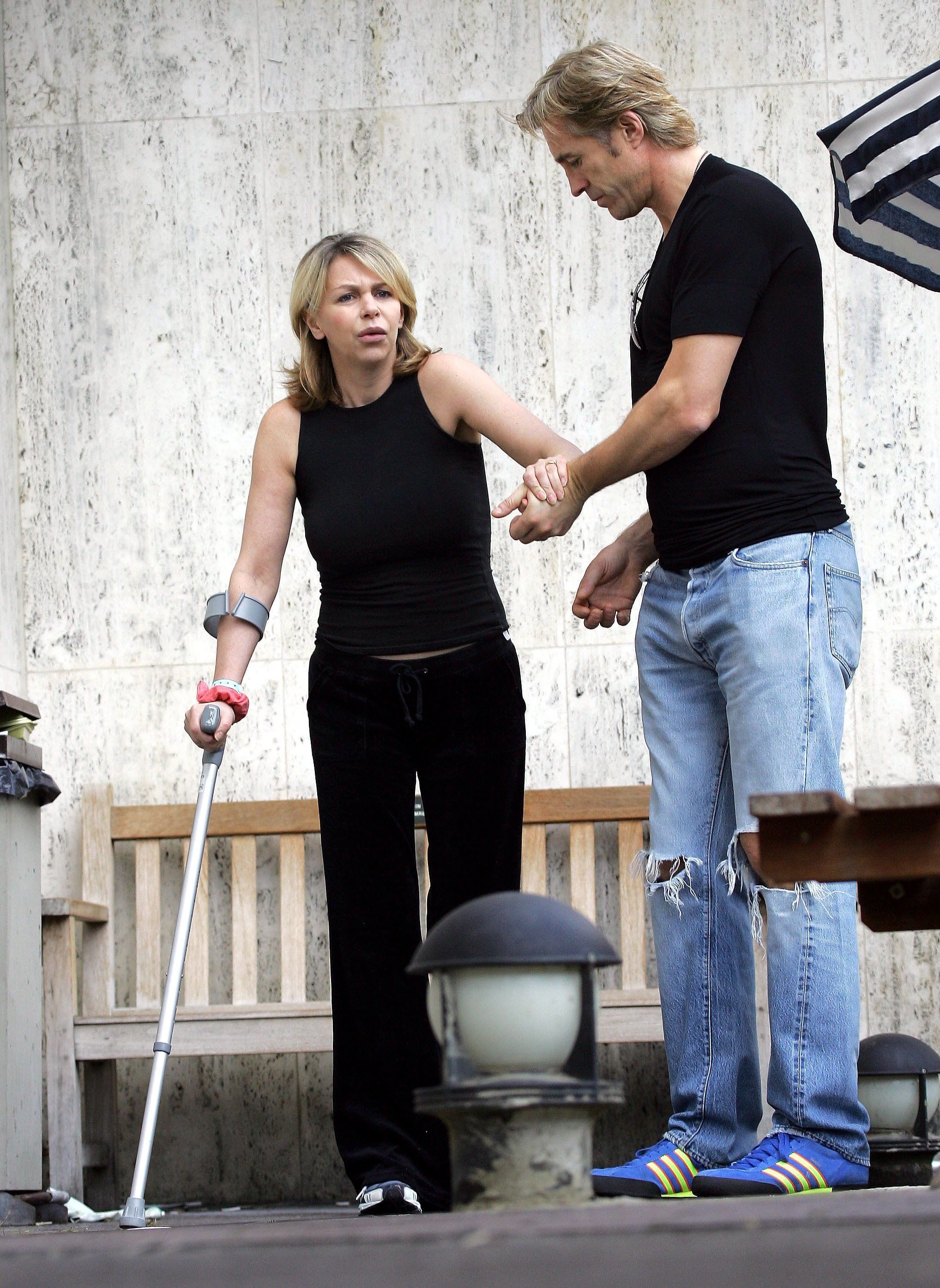 "If someone walks into me it wouldn’t take much for me to be knocked off my feet so I carry the stick as a warning.

She added: “I was in and out of hospital for 15 years and it left me depressed. They put me on anti­depressants for a long time.

“I wouldn’t advise anyone to go on antidepressants — work it out, talk to someone but don’t go on those pills because they just numb you.

“You don’t feel happy, you don’t feel sad, you are just in a zone. Then you find it difficult to get out of that zone.

“I was so frightened to come off them because I was using them as pain relief and worried I would be left really low and depressed. I’ve come through it now.”

Leslie, who has branched out by starting an online platform called Booksoffice where authors can showcase their novels with the help of actors, is delighted to be back on TV after an 11-year hiatus.

She will play Mary McRae in Doctors and does not fear stepping back into a hospital environment.

She said: “It’s strange because I’ve done Holby City and Where the Heart Is, where I was a district nurse, and now Doctors.” 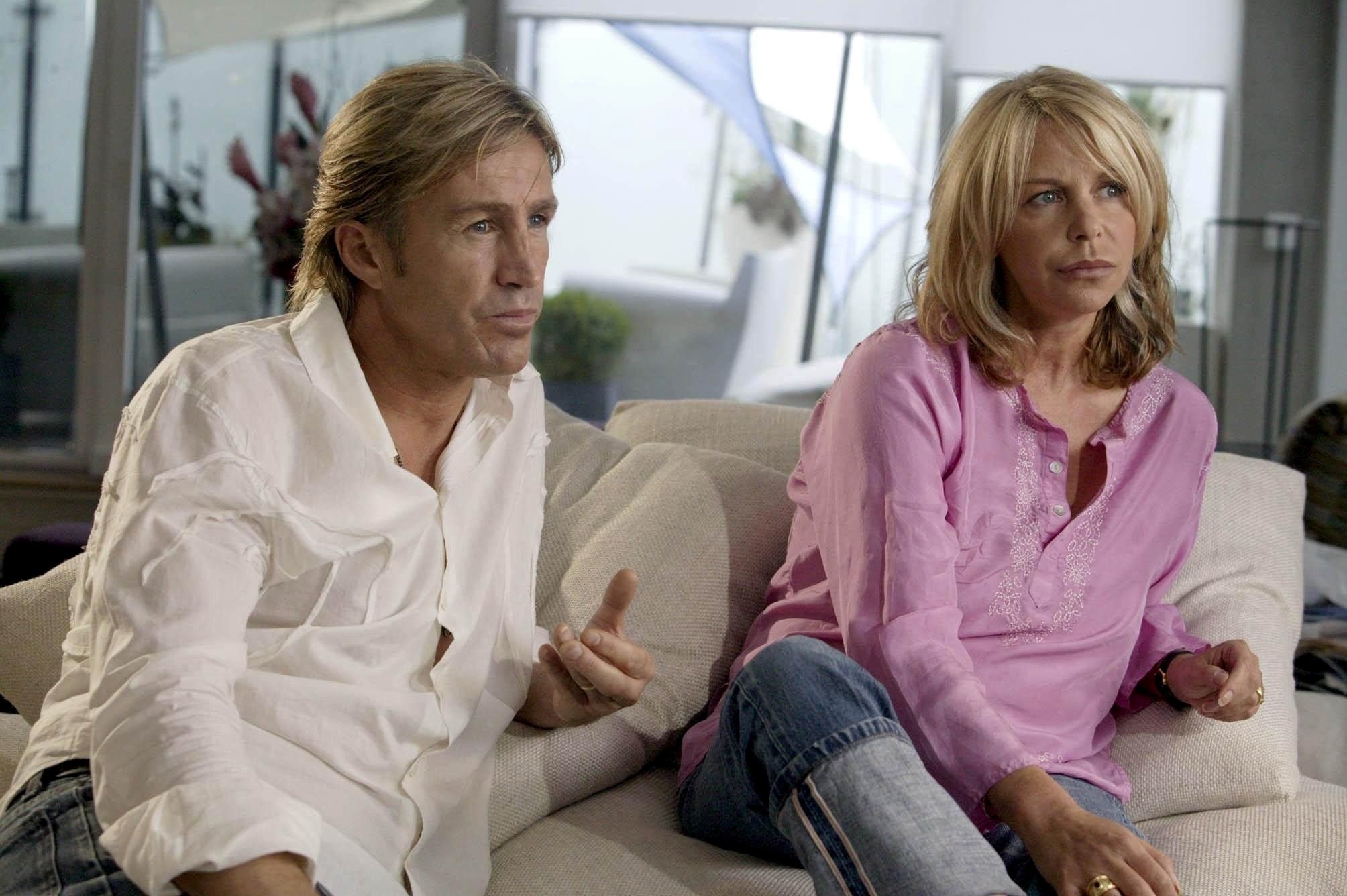 One constant has been her husband, ex-West Ham ace Lee Chapman, who she met when she was 26.

She said: “Without a doubt I found my soulmate. I think for anyone to have this longevity is unusual.

“I am running out of friends that are still with their husbands, actually.

“We are really proud of ourselves. We have a lot of fun and laugh a lot.

In my 40s I used to get angry that everyone going
for jobs was called Amanda. There was Holden,Redmond, Burton…I was out of work because of the Amandas!

“We are together 24 hours a day and if you can do that and not go crazy then you know you are good.”

“We do have fun, we have the same interests and love going out for dinner and have a passion for food and wine.”

Leslie, who was teetotal for several years, added: “I’m back on the booze and it’s lovely.”

She con­tin­ued: “We are entering into that time of our lives when we spend a lot of time at home but we also go to Ibiza a lot and we like travelling. 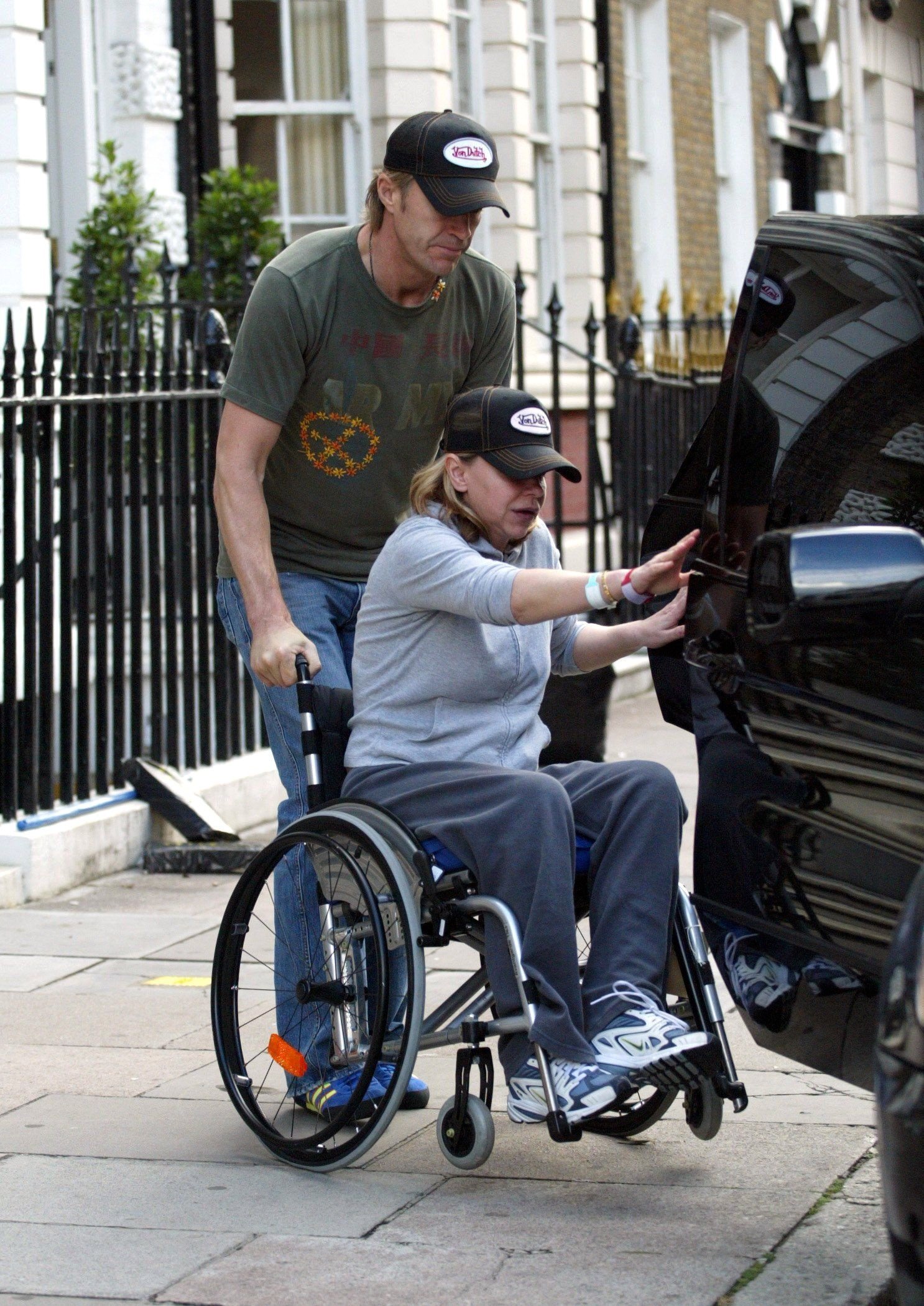 "We don’t go clubbing and I’m not a night person but I do like day-clubbing with a DJ and a nice boozy lunch.”

And Leslie reveals her husband has the same body he had when they met. 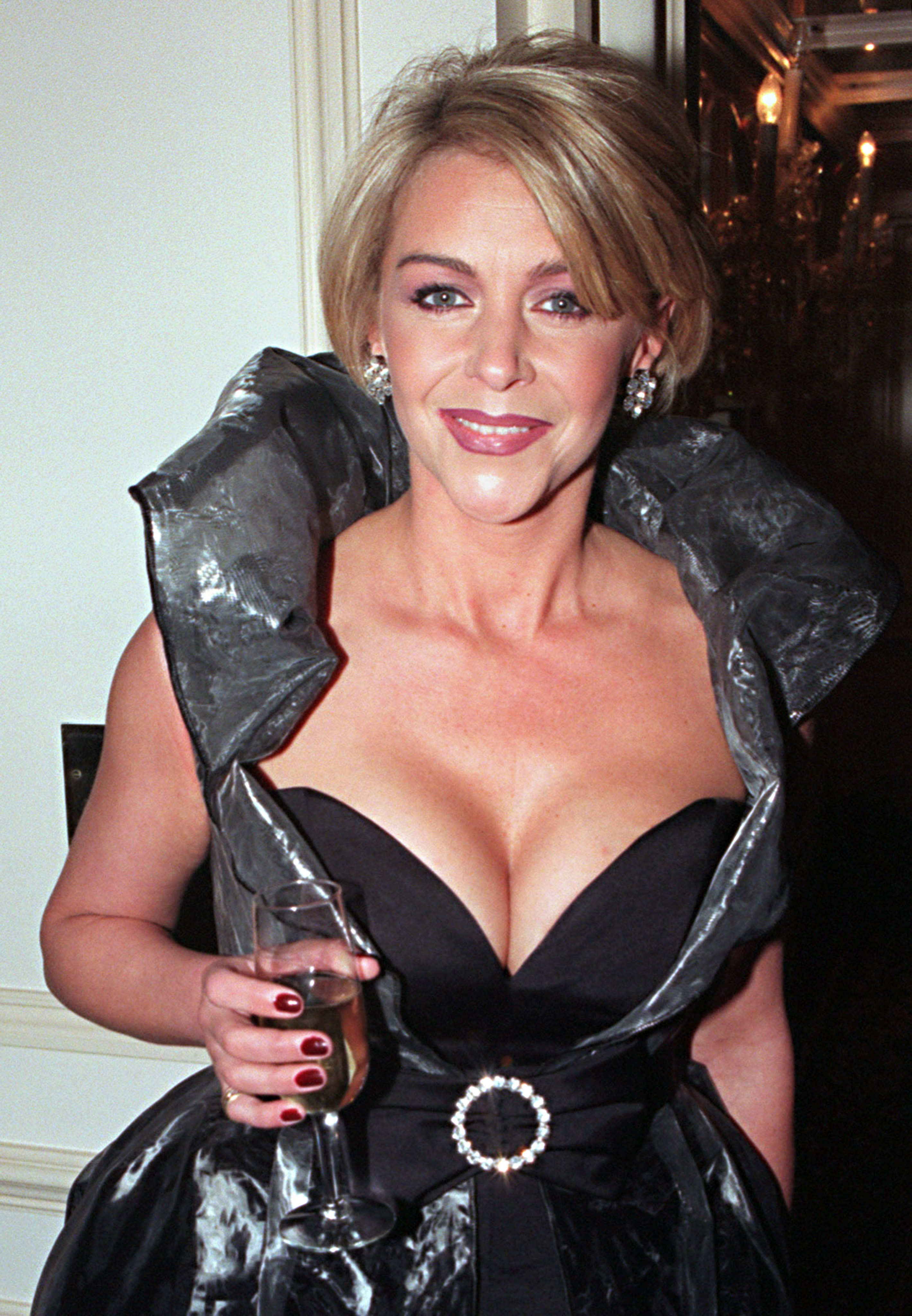 She joked: “It’s bloody irritating. Lee is exactly the same. He works out every single day and goes running every day. He looks, physically, exactly the same as when I first met him.

“He works hard — he’s always been an athlete and always will be. He’s got serious abs, and everything is where it’s meant to be.

“He watches what he eats and we don’t drink Monday to Friday and then enjoy ourselves on the weekend and that’s enough for us.”

The Crown season 3: Will Prince Charles, Diana and Camilla love triangle be explored?