[This post contains spoilers for Euphoria episode “’03 Bonnie and Clyde”]

You know how every few months, a new movie about a serial killer comes out and the actor who is playing said serial killer has to be like, “guys, I’m a serial killer. I’m not hot, okay?” Well, I think I have just stumbled upon another version of this problem. It’s called “help, I ship this couple even though they’re toxic because they have an insane height difference.” Yes, Maddy and Nate from Euphoria…I’m talking about you.

Maddy Perez (Alexa Demie) and Nate Jacobs (Jacob Elordi) are undoubtedly toxic. They make Gossip Girl‘s Chuck and Blair look like the sweetest, healthiest relationship you’ve ever seen. Despite this (and maybe because we’ve all been told millions of height-related lies on Tinder…), everyone’s obsessed with the fact that Nate towers over Maddy.

cant sleep knowing nate and maddy from euphoria may be toxic but they have the sexiest height difference out here pic.twitter.com/a75KRpCrUL

Alright alright Nate and Maddy’s relationship is toxic af but like wow have u ever seen a more beautiful height difference :’((( it’s so good pic.twitter.com/l9GWi94AE4

Because I know you want to know…Alexa Demie is 5’6″. That’s an extremely average height. (She’s two inches too tall to buy petite jeans. So no, she’s not even short!) Jacob Elordi is really the one putting in the work to serve us an impressive height difference here, because he’s 6’4″. He’s enormous! 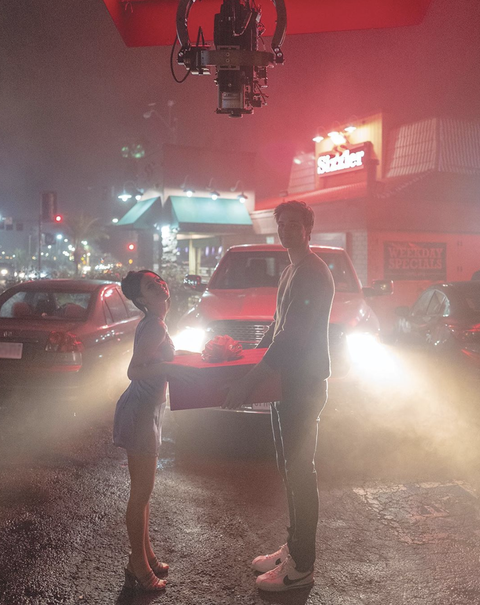 Anyway, having a boo tall enough to use your head as an arm rest is obviously something that people really thirst for. Sorry, but, I’m going to go ahead and destroy that fantasy.

For Nate and Maddy, the height difference is not just a cute little bullet point in a list of reasons why they’re total couple goals. (Especially since they are definitely not couple goals.) Instead, it’s a very physical representation of why their relationship is problematic. Nate is SO much bigger than Maddy, and although she seems to like that because she enjoys having someone to protect her…it goes from sweet to scary way too quickly. Yeah, Nate can beat the crap out of someone “for” Maddy, but he also straight-up abuses her. Having a 6’4″ boyfriend who can pick you up is fun and games until you realize he has a dangerous temper and violent tendencies. Nate already wants to control Maddy, and his size just allows him to do it physically, too.

I’m not suggesting that you should start swiping left on guys just because they’re over six feet tall. I’m just sayin’ that Nate and Maddy’s height difference is a big part of the reason you have such complicated feelings about their relationship.

Who is Kaye Adams' partner Ian Campbell? | The Sun