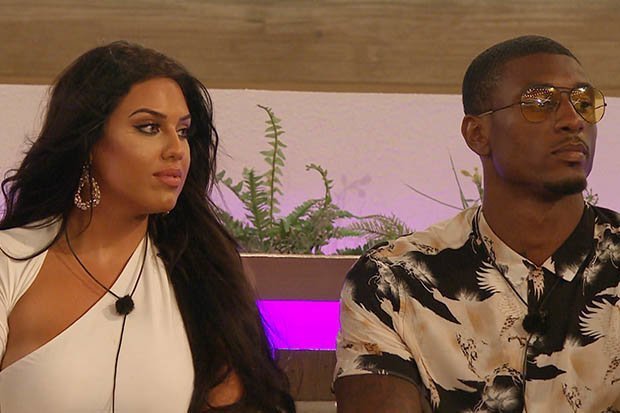 Fans of the ITV show have taken to Twitter in a storm of rage tonight.

Over the last couple of days, it appears Love Island viewers have taken a disliking to Anna Vakili after she “broke” Ovie Soko’s heart.

The professional basketball player has become a fast fan favourite and viewers were “distraught” after Anna dumped him to go back to Jordan Humes.

But tonight appeared to be the last straw for some fans as they begged producers to “kick” Anna out of the villa.

The contestants received a text to say it would be a double dumping and they now had to choose which couple went home, Amy Hart and Curtis Pritchard or Lucie Donlan and new boy George Rains.

While discussing it, Ovie begged Anna to save George so he “wouldn’t be alone in the villa” but the 29-year-old decided to save her pal Amy instead.

When it came to announcing which couple they had voted to kick, Ovie broke down in tears while a shocked Anna rolled her eyes at his outburst.

Viewers flooded to Twitter, one hit out: “Anna’s an absolute c**t, Ovie is genuinely upset and she’s rolling her eyes behind his back why couldn’t she have gone.”

Another said: “Did Anna just roll her eyes while Ovie cried? Kick her out now.”

A third wrote: “Boot Anna out right now. How dare she do that while he’s crying,” followed by a sad emoji.

Please refresh the page regularly to get the latest updates.

Reporters working on dailystar.co.uk will be working to source the latest information, reaction, pictures and video related to this story.

You can also follow us on Twitter @Daily_Star to get the latest news updates 24 hours a day.

Or download the Daily Star app for flash alerts on the biggest stories of the day.

The Truth About Karla Mosley

Who are Nick Kamen's ex-girlfriends? From Amanda de Cadenet to Tatjana Patitz