Good Morning Britain hosts Piers Morgan and Susanna Reid welcomed David Baddiel onto the show to discuss his new book but talk turned to the abuse he received online. Baddiel explained he felt “there’s a constant attempt to downgrade anti-Semitism” on social media with Morgan insisting more needed to be done to stop abuse online.

“One of the things that is very important for me to make clear is that for me, jewishness is an ethnicity not a religion,” Baddiel explained.

“It is a religion but the religion for me in this discussion is irrelevant because I’m an atheist but that would not have gotten me any free passes out of Auschwitz.

“But I’ve noticed that on Twitter there’s a constant attempt to downgrade anti-Semitism to say it’s not really racism, it’s religious intolerance.

“But the need to see Jews as an ethnicity is very important in this and I think that what social media has done really, for the first time, along with other things, has mobilised the sense that Jews are persecuted.” 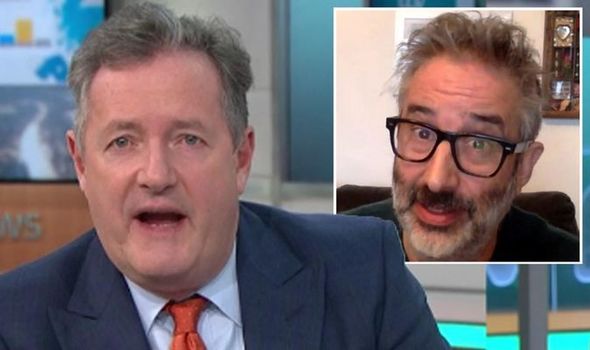 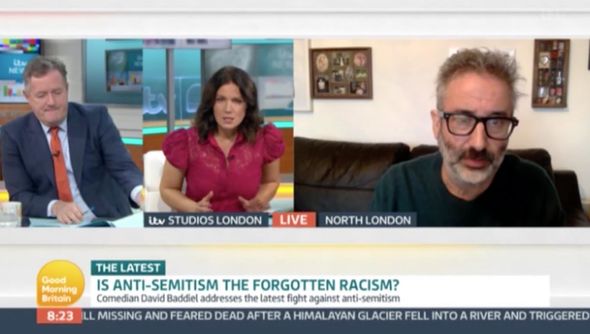 “Obviously this is happening to all minorities and social media is very responsible for that in general,” he continued.

“But I think that in the way conspiracy theory and everything else has been accelerated so massively by social media, it has really brought into focus how anti-Semitism always lie at the bottom.”

“Specifically on the social media issue, what should be done?” Reid asked. 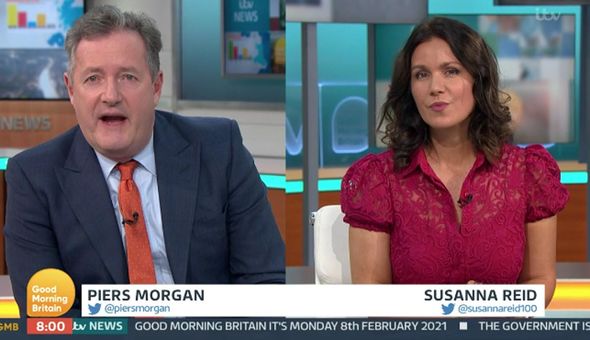 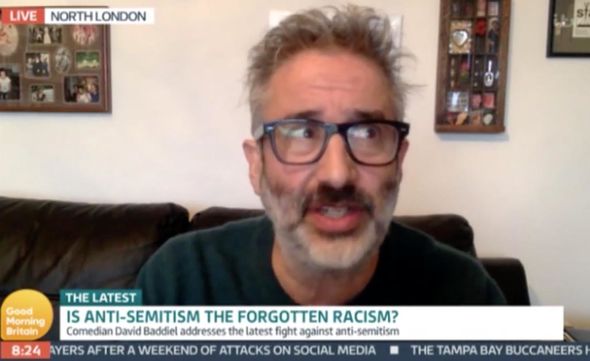 “What in your view would work on those who think it is okay, partly because they are anonymous they can get away with it, what’s going to stop them?”

Baddiel replied: “Well I personally think it is about the companies.

“I don’t know if you saw any of the documentaries about Holocaust denial that was on the BBC but in that documentary, I actually spoke to someone from Facebook.

“It was really hard to get anyone from Facebook to talk about it but I spoke to them and said, ‘You allow Holocaust denial on your site, that is a form of hate speech against Jews.’

“At the time they had this policy of like, ‘Oh no, well maybe it was historical error,’ and I told them, ‘No really, no one denies the Holocaust because they’re not sure if it happened or not. It’s always a form of hate speech against Jews.’

“To be fair to Facebook they have started a policy where they do ban Holocaust denial on the site.

“The point about that is it can be changed, they do have algorithms and they can work on it.

“Although I agree with Piers that you need to make it clear to individuals that this kind of abuse needs to be punished and have consequences, I think it starts with the companies and the companies have a lot of money and incredible monopoly of influence and I think they can do something about it.”

Morgan responded: “I agree with that but I also think the individuals should be held accountable.

“If you issued a lot of big fines to people who are doing this with impunity, I think that would be a major factor in deterring people. At the moment there is no deterrent.”

Good Morning Britain airs weekdays on ITV at 6am.

Escape to the Chateau: Who is Dick Strawbridge’s wife Angel Adorée? – The Sun