My Policeman, which had its World Premiere today at the Toronto International Film Festival, has its roots  in a novel by Bethan Roberts  which was actually based on a complicated love relationship between famed novelist E.M. Forster (A Room With A View, Howard’s End, Maurice), his male lover of 40 years, a policeman named Bob Buckingham, and Buckingham’s wife May Hockey who slowly came to realize her husband had a long standing affair with Forster, but even after he had suffered a series of strokes took care of the author in his later life so deep was their friendship. Roberts changed  the names and fictionalized it all for her book which is now the basis of Ron Nyswaner’s (Philadelphia) screenplay which explores the love triangle of three freewheeling friends in 1957 who each was hobbled by the mores of the time, repressing rather than expressing their own sexuality, even as the sexual desires and confusion hit a boiling point.

Bordering on a rather soapy premise, this is a high class production that keeps it upscale, if somewhat sexually graphic, all the way thanks to its Tony and Olivier Award winning director Michael Grandage and a sterling cast that has been split in two with the decades-spanning story employing three younger stars for the 50’s scenes, and three older veterans playing the same characters in the 90’s. It is a risky technique  that doesn’t quite pay off as the older and younger trios of actors don’t quite believably match each other, at least initially for me until I came to accept the casting ploy. 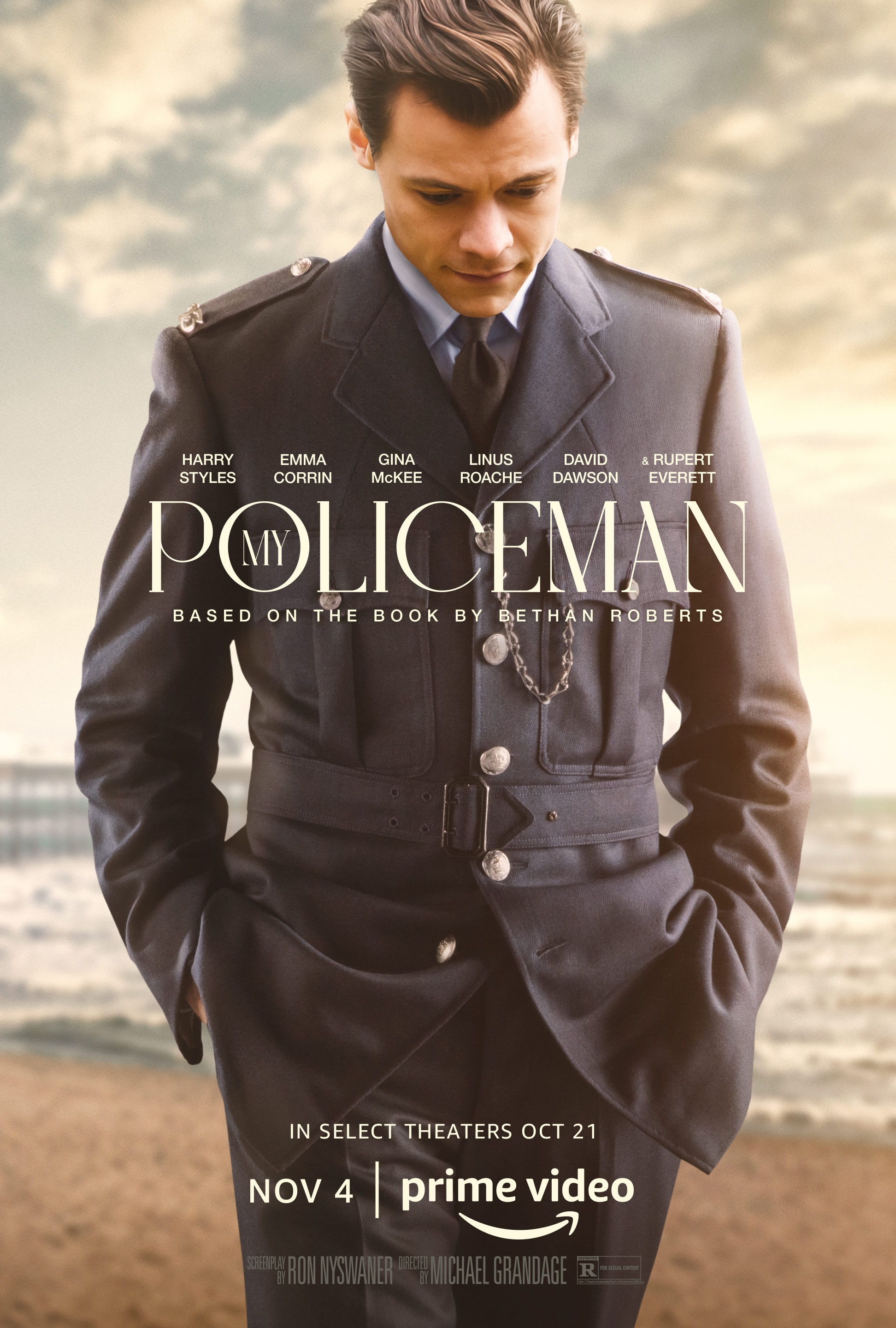 Plotwise Harry Styles in his second film of the festival season after last week’s Venice debut of Don’t Worry Darling, plays British policeman Tom who is befriended by lively museum curator Patrick (David Dawson), as well as a shyer school teacher Marion (Emma Corrin, also in a second fest movie this week after the debut of  Lady Chatterley’s Lover) who because of the times must contain her own growing sexual attraction to Tom. Eventually though, in the most proper of ways, Tom and Marion get married, not a loveless union but not a passionate one and one where Marion can’t seem to hold back her jealousy of the “friendship” between Tom and Patrick. With homesexuality illegal at the time, Patrick also has to watch himself but one day alone with Tom makes a move that leads to a very physical and steamy clandestine affair that both keep secret from Marion. It is a continuing game of deception even as Marion gets more increasingly frustrated, perhaps suspecting something but trying to win the kind of lover in Tom that just isn’t there. It certainly is for Patrick, and Dawson and Styles go for it with no holding back in a bedroom scene that leaves little to the imagination.

Meanwhile  as indicated by the beginning of the film things are different decades later and that is where we see the now much older and graying Marion (played by Gina McKee) arriving to serve as a caretaker to a wheelchair bound stroke victim unable to speak. Eventually we discover this is Patrick (now played by a pensive Rupert Everett). In one moment when she is alone in his room she finds a journal  that details his affair,the one she suspected, with her husband Tom who now is played by Linus Roache as a seemingly satisfied husband, long ago breaking away from Patrick once they were found out. The complications of what came before, the mutual agreement to move on and ignore what happened, and the need for closure provide yet another chapter still to be written for these three lives. 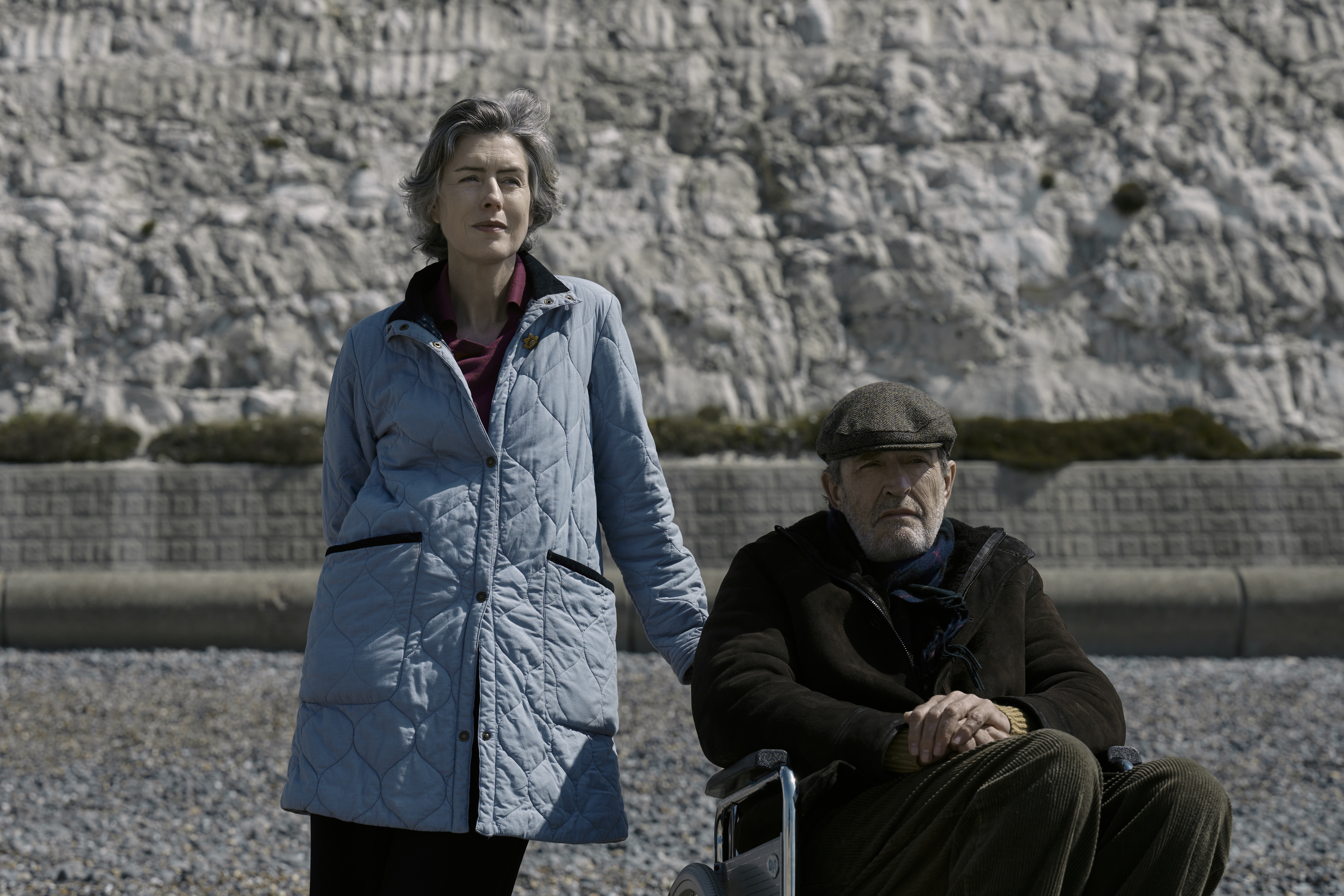 Between Don’t Worry Darling and My Policeman Styles is quickly proving himself to be the real deal as an actor, and he is very convincing here as a man lost in deception with his wife. Corrin made up in passion in Lady Chatterley’s Lover what is lacking in this subdued character who finally takes a stand but unfortunately so much time is lost between. Corrin certainly is showing lots of range these days.  Dawson is excellent in the sad position of simply being who he is in a time where being gay  is a crime. My how times have changed, but have they? With some openly  wanting to ban gay marriage again, My Policeman seems oddly timely in taking us back to darker days we thought were long gone.  Everett, McKee, and Roache are all fine as far as the contemporary scenes go but I actually wish they had aged up the younger trio of actors which might have made this all a tad bit more convincing.

It is a handsome looking production, and always kept my interest, but for me it doesn’t quite reach its full potential. Producers are Greg Berlanti, Sarah Schecter, Cora Palfrey, and Philip Herd are producers. Ben Davis provides some lovely cinematography, and the score by Steven Price is excellent. It will begin streaming on Amazon Prime beginning November 4, with a theatrical run starting October 21.

‘All The Beauty And The Bloodshed’ Takes Golden Lion; Acting Nods For Blanchett & Farrell

‘Rings Of Power’ Aftershow ‘Inside The Ring’ Episode 3: Settling The Score; Welcome To Númenor