Phillip Schofield, 58, was on hand to host the first civilian edition of The Million Pound Cube on Monday evening and he was joined by a pair of brothers who wanted to get their hands on some cash. After John managed to complete the first challenge on his own, he played with his sibling Adam in the second game. However, as tensions rose and the intensity hit fever pitch, the contestants turned on one another which led the ITV presenter to intervene as he sent the programme to an advertisement break.

The brothers were tasked with releasing a number of red balls from a cylinder container, which would then disperse themselves on the floor of The Cube.

Once the countdown had begun, the pair had to collect all the balls and place them back into their holding before time ran out.

Although this seemed like an easy challenge, the siblings had great difficulty in collecting all the little spheres after delegating themselves each a side of the perspex box to focus on.

John was blamed by his brother several times for missing the odd one, but the argument which led to a break saw one of the balls left on Adam’s side.

“We’ve got to work as a team in here,” the former told his sibling, adding “they had time” to get the last one. 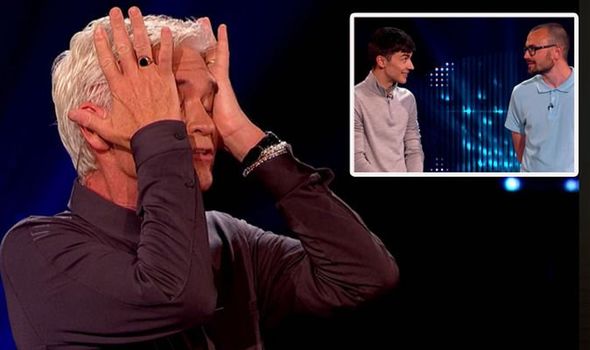 As the brothers continued to clash, Phillip could be seen outside the box nodding his head in agreement with the fact they needed to communicate more.

“This is what happens when you put brothers in The Cube,” the presenter joked, with Adam saying: “We’re no good at this.”

Picking up on the tension, the host thought it would be a good time to stop as he then told viewers watching at home: “We’ll be back after the break,” with advertisements beginning to play out.

Picking up where the game left off when the programme returned to screen, the siblings put their heads together one last time and managed to complete the challenge.