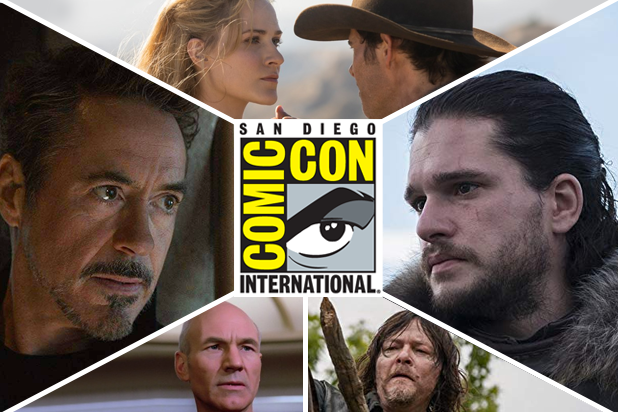 The latter experience is arguably the most anticipated of the week, especially for Marvel Cinematic Universe fans eagerly awaiting news about Phase 4.

But even the avalanche of MCU announcements sure to come from those panels can’t make up for the fact that film buffs will largely be hurting for new info at Comic-Con 2019.

While Paramount is kicking things off Thursday with a “Terminator: Dark Fate” Hall H panel, Sony, Universal and Warner Bros have decided to forgo this year’s event, which just so happens to be its 50th anniversary.

And with film studios scarce this week, television is picking up the slack.

SDCC 2019 is packed with panels for TV series, including HBO’s “Game of Thrones” and “Westworld,” CBS All Access’ “Star Trek: Discovery” and “Star Trek: Picard,” AMC’s “The Walking Dead” and “Fear the Walking Dead,” Netflix’s “The Witcher” and “Dark Crystal: Age of Resistance,” TBS’ “Snowpiercer,” Hulu’s “Veronica Mars” revival, Fox’s “The Orville,” “The Simpsons” and “Family Guy,” ABC’s “Stumptown” and “Marvel’s Agents of S.H.I.E.L.D.,” and The CW’s “Riverdale,” “Supernatural” and Arrowverse series — just to name a few.

But does the small screen’s domination this year portend a film famine at future SDCCs? Not necessarily, says Comic-Con International spokesperson David Glanzer.

“I don’t think it’s really a trend, necessarily,” Glanzer told TheWrap. “One of the things I think is honestly savvy on behalf of studios typically is that, well, we have very dedicated fans and very passionate fans, and I think there was a thought in some years past that you should come whether you had something worthy of promoting or not to those fanbases. So maybe something that isn’t quite ready, but at least if you got in there that would reap some dividends for you.”

While Glanzer says Comic-Con does not track how many film and TV studios are coming each year and if the numbers are down versus the previous convention, he notes “there is always an ebb and flow with film.”

“Some years are really big, some years are small,” Glanzer said. “Some years studios come, some years they don’t. It just really varies from year to year. I don’t think there’s really any underlying reasons except that entertainment in 2019 is very different than it was in the 1970s, when we first started.”

“And I think because there are so many television stations and so much off-network content now that there is a lot more to choose from on that side,” he added. “So I think a lot of those people are taking advantage of sharing those projects with the Comic-Con fanbase.”

SDCC is expecting more than 135,000 attendees at its 2019 convention, and those are the people Glanzer says studios and networks need to be thinking about when they decide to pass on panels.

TheWrap is in San Diego all week long for Comic-Con 2019 — check out all of our ongoing coverage here.

'Gretel and Hansel' Clip Heads to the Witch House

Brad Pitt Lost Out on Role in Horror Movie Elvira: Mistress of the Dark Because He Was Too Cute