“It’s always someone you know,” goes the tag line for “Scream,” the fifth installment in the beloved slasher franchise jumpstarted by the late Wes Craven and writer Kevin Williamson in 1996. It might be more accurate to say it’s always the movie you know, as “Scream” has delivered reliable jump cuts and stabbings for its bloody duration. Though the new movie lopped off the numeral to reclaim the original title, there’s nothing in the story that ignores “Scream” is the fifth chapter in the killing spree saga that has long plagued the fictional town of Woodsboro, California. “Scream” makes so many references to its predecessors, along with plenty of other horror flicks both lowbrow and high, it’s impossible to forget you’re watching a fictional film. It may be exciting to let the audience in on the joke, but it’s hard to get lost in this world.

“Scream” opens much like the original “Scream” did, a fact the familiar voice on the other end of the landline (this time the distinction has to be made) is eager to discuss with his new victim Tara (Jenna Ortega). Alone in the house with her mom out of town, he makes her play a little game of movie trivia. He knows she’s a fan of scary movies, but he’s disappointed with her highbrow answer to his favorite question, “What’s your favorite scary movie?” Tara is partial to the dreaded “elevated horror” like “The Babadook.” She likes her thrills with a side of social commentary, layers of meaning, and art direction. When he gives her three chances to save her friend’s life by answering “Stab” movie (AKA “Scream”) trivia, she rattles off a list of arthouse genre films. “Ask me about ‘It Follows.’ Ask me about ‘Hereditary.’ Ask me about ‘The VVitch,’” she pleads.

The references don’t end there. Not only does “Scream” include mentions of Jordan Peele, “the ‘Knives Out’ guy,” “Halloween,” and “Psycho,” but the entire plot hinges around parsing the details of the various preceding films. In this way, it cleverly sidesteps any fears that fresh audiences wouldn’t be able to keep up, while also flattering longtime fans who’ve been paying attention the whole time. But when each character spends much of their screen time discussing the past, it’s hard to establish a rapport between any of the fresh-faced newcomers. 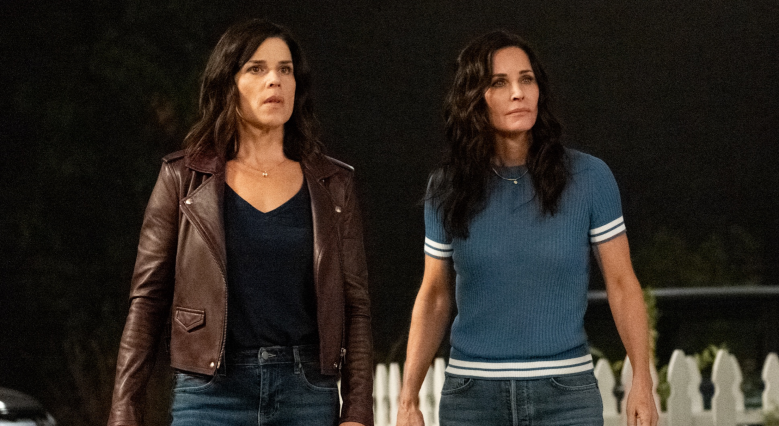 They include “In the Heights” star Melissa Barrera as Sam Carpenter (perhaps a reference to John), older sister to Tara who reluctantly returns to Woodsboro after a mysterious disappearance five years prior. She brings along her boyfriend Richie (Jack Quaid), a “Stab” franchise amateur who has no idea what he’s getting himself into. Sam isn’t too subtle in her failed attempts to persuade Richie to get out while he still can: “You know that part in horror movies where you want to yell at the characters to be smart and get the hell out? This is that part.”

“Scream” also features the return of David Arquette’s Dewey Riley, who has appeared in all four previous films. It’s Dewey who delivers the rules of “Stab,” which include to never trust the love interest, and to always suspect the first victim’s friend group. Tara’s tight-knit friend group includes the nostalgically-named Wes (Dylan Minnette), best friend Amber (Mikey Madison), twins Chad (Mason Meeks) and Mindy (Jasmin Savoy Brown), and Chad’s girlfriend Liv (Sonia Ammar). Their stiff banter never rises above YA pilot quality, though that may have more to do with the fact that they’re played by a bunch of YA television actors. Regardless, they’re as distinguishable as they need to be in order to catalogue specific suspicions of each one.

The Dewey scenes are the most naturalistic, or at least the only time the meta-movie falls away enough to get lost in the story for a few minutes. Arquette is all grizzled charisma as the lovelorn ex-cop drinking in a busted trailer, a reminder of why he was once such a bankable star. That’s more than can be said for Courteney Cox and Neve Campbell, who show up just long enough to satisfy fans but fail to make an impression. (Not that they could if they had wanted to, as their roles seem intentionally minimized in James Vanderbilt and Guy Busick’s script.)

The writers seem to have intentionally left themselves room to fail. With lines like, “If you ask me, this whole franchise goes off the rails in number five,” they’ve beat any critics to the punch. The fans even make an appearance with overt references to “toxic fan culture,” though it’s unclear if they’re being skewered or let in on the joke.