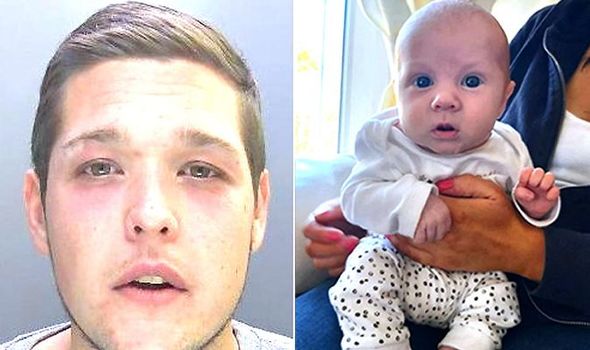 A serious case review is now being carried out into the death of Teddie Mitchell, who died aged 11 weeks, after receiving catastrophic injuries at the hands of Kane Mitchell, 32. Teddie died in hospital on November 1, 2019, after being admitted 10 days earlier. His mother Lucci Smith, 30, and Mitchell, who was jailed for life with a minimum 18-year term last February, called 999 after he went into cardiac arrest at their flat in St Neots, Cambs.

But they told police they had no idea how he suffered injuries including a fractured skull with a bleed on the brain.A new twopart Channel 4 documentary, 24 Hours in Police Custody: Cold To The Touch, reveals how police proved Mitchell’s guilt after the couple’s claims they did not know what happened.

Worried neighbours had previously alerted Cambridgeshire Police and social services with concerns for children in the home. The TV programme asks Cambridgeshire Council what, if anything, was done in response to those fears.

A council spokesperson said: “A serious case review is underway and the findings should be published later this year. We cannot comment further until it is published.” A post-mortem examination showed Teddie’s skull was broken in half. He had fractures to his spine, 17 ribs, pelvis, both clavicles, and had suffered five or six injury events since birth.

DI Lucy Thompson said in 20 years of child protection she had never before come across the level of catastrophic injuries to a baby – the result of “months of sustained ill treatment”.

The pathologist told police they were “akin to Baby P-type injuries”, in reference to Peter Connelly, who died at 17 months in north London in 2007. The injuries were caused by his mother Tracey Connelly’s partner Steven Barker.

DI Thompson said Mitchell and mum-of-four Smith, who received a two-year community order for neglect, claimed to have a perfect relationship and there appeared to be no child protection history. However, neighbours painted a different picture with one providing video evidence of Mitchell during a furious rage.

24 Hours in Police Custody: Cold to the Touch is on Channel 4 at 9pm tomorrow and Tuesday

Jennifer Carpenter Is Officially Coming Back to 'Dexter'