Actor Noah Schnapp is speaking out about his character’s sexuality on “Stranger Things” after fans questioned whether or not Will Byers is gay.

“It’s really up to interpretation,” Schnapp, 14, told The Wrap.

The speculation was reignited in the third episode of Season 3, which premiered on Netflix on July 4, after Byers grew frustrated with his best friend’s budding romances.

“It’s not my fault you don’t like girls,” Mike Wheeler (Finn Wolfhard) yelled at Byers, who wanted to play a game of Dungeons & Dragons instead of talk about their love lives. 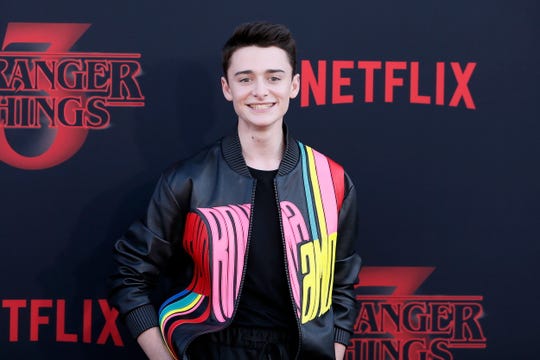 Noah Schnapp poses for photos on the red carpet prior to the premiere of 'Stranger Things: Season 3' in Santa Monica, California on June 28, 2019. (Photo: ETIENNE LAURENT, EPA-EFE)

“OK OK OK HOLD UP….Episode 3……. did Mike insinuate that Will is Gay??? Or is it just because he’s still ‘young’ and not into girls yet?” one fan tweeted, while another added: “Is Will gay?? What is this line by Mike supposed to mean?”

Schnapp explained that fans will have to draw their own conclusion about Byers’ sexual orientation. “When you hear Mike say that line, it’s really up to the audience to interpret it,” he told The Wrap.

As for his personal belief? “I kind of just interpret it like he’s not ready to grow up and he doesn’t really want to move on to dating and relationships yet. He still wants to be a kid and play in the basement like he did in old times.”

‘Stranger Things’: Lip gloss was secret ingredient to getting Billy to look so sweaty

Byers’ sexuality has been a topic of discussion since “Stranger Things” premiered in 2016. Schnap addressed the speculation on Instagram that year, writing, “For me, Will being gay or not is besides the point.”

“‘Stranger Things’ is a show about a bunch of kids who are outsiders and find each other because they have bullied in some way or are different,” he wrote in a now-deleted post. “Does being sensitive, or a loner, or a teenager who likes photography, or a girl with red hair and big glasses, make you gay? I’m only 12 but I do know we all relate to being different.”

The third season of Netflix’s “Stranger Things” is now streaming.

Naked Attraction’s oldest contestant ever is widower, 75, with penis piercing